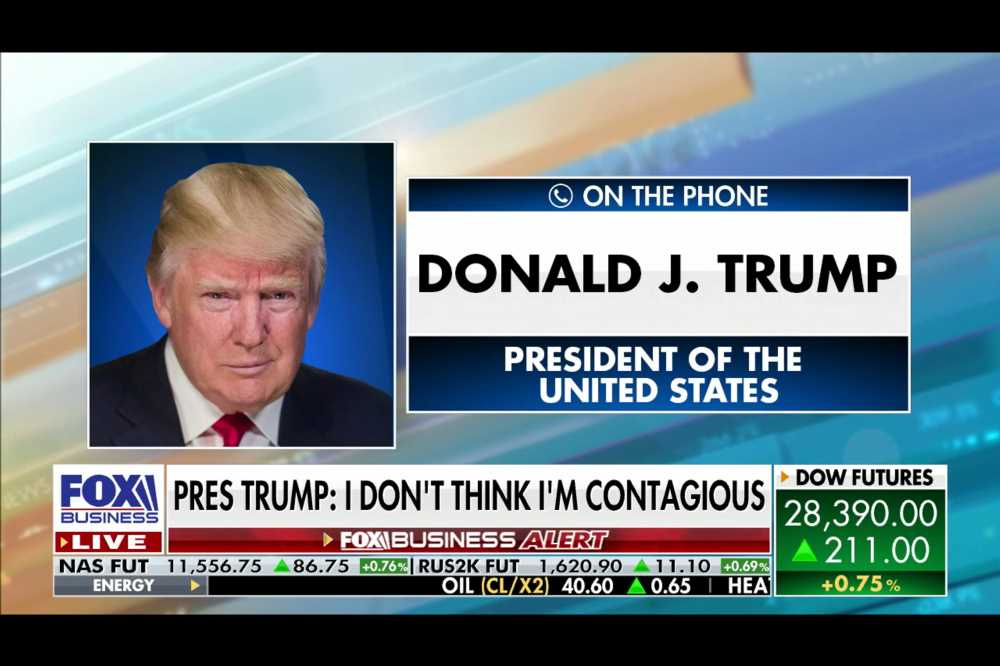 In his first live interview since announcing that he tested positive for the coronavirus, President Trump called into Maria BartiromoR17;s Fox program on Thursday and wasted no time in proving that he is still an awful human being.

The president, with guidance from the Trump sycophant Fox host, hit many of his usual unhinged, baseless, racist, dangerous, callous, boast-filled notes during the 55-minute call-in interview.

Trump said nothing about the slew of people in his administration who have contracted the virus and suggested, without providing any proof, that Gold Star families may have passed the virus onto him because “they wanna hug me and they wanna kiss me.”

Trump’s barrage of the lies began after he said he will not abide by the format changes announced by the Commission on Presidential Debates. These changes were spurred by him testing positive for Covid-19.

The president said he will not participate in a virtual debate, planned for October 15, because the commission’s action is all a ruse to protect Joe Biden. Trump also claimed that not only did he beat Biden in the first debate but that he also scored a victory against his opponent in the second debate — the future debate that he had just told Bartiromo he would not attend.

“I heard that the commission a little while ago changed the debate style, and that’s not acceptable to us. I beat [Biden] easily in the first debate, according to the polls that I’ve seen,” Trump said. “But I beat him easily, I felt I beat him easily. I think he felt it, too. He wouldn’t answer any questions and he had the protection of Chris Wallace all night long. I thought Chris Wallace was a disaster.”

Trump went on to falsely claim that once someone is infected with the virus, they not only get well but they are then immune.

“Remember, when you catch it, you get better, and you’re immune,” Trump said.

But more than 211,000 Americans have died from the virus and the president’s claim of immunity has not been proven. In fact, as Vox’s Aaron Rupar points out, scientists and researchers have discovered multiple cases of reinfection, one in America, and others around the world.

The also president viciously attacked Democratic vice-presidential candidate Kamala Harris, twice referring to her as a “monster” and made the absurd claim that she is a “communist.”

“This monster that was on stage with Mike Pence, who destroyed her last night, by the way,” the president said, “But this monster, she says, ‘No, no, there won’t be fracking’ … Everything she said is a lie.”

The president of the NAACP, Derrick Johnson, responded to Trump’s unhinged attack of Harris in a tweet, writing, “We condemn in the strongest possible terms Trump’s ugly &amp; offensive characterization of a sitting Senator and first Black woman on major party presidential ticket. Hatred has no place anywhere, especially not in White House.”

The bizarre interview continued with Trump citing his supporters who gather together on boats and trucks as proof positive that polls showing him getting trounced come November are all a sham.

“I don’t believe the polls because we’ve never had this much support. They have a boat thing that they have 5,000 boats. They have thousands of trucks all over the country… The polls are rigged,” Trump said.

Trump went on and on, bragging about being nominated for a Nobel prize and calling on Attorney General Bill Barr to indict Hillary Clinton and others from the Obama administration.

Finally, as if we are not already living in a seemingly unending nightmare, Trump told the Fox host that he is protecting Americans from hell.

“I’m the only thing standing in the way [of Democratic control] because this country will go to hell,” the president said.