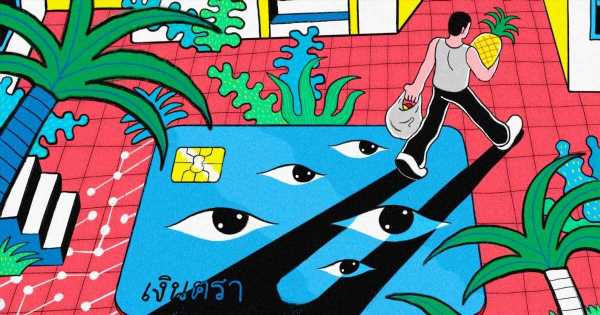 Like many countries, Thailand is giving citizens cash transfers to help them ride out the coronavirus pandemic. But the military-backed government that rules the country is getting something potentially valuable in return: a huge volume of data on how millions of Thais spend their money.

Since 2017 Thailand has funneled assistance to its poorest citizens via so-called cash cards that are automatically loaded with a small amount of money each month. The cards are a more sophisticated version of the Electronic Benefit Transfer cards used to distribute food aid in the U.S., but linked to a much broader range of activities. While the government says the information is needed to formulate better policies, privacy advocates are concerned—not least because the number of Thais who use the cards, about 14 million, is set to climb as more people thrown out of work by the Covid-19 pandemic sign up for assistance.

“Any time you’re talking about the government’s collection and use of personal data, particularly a large volume of it, the risks are always higher,” says David Hoffman, a cybersecurity expert at Duke University who also chairs the National Security Agency’s advisory panel on privacy. “The dystopian possibility,” he says, is “that you get a tremendous view into individual citizens that then could be used for a variety of government law enforcement purposes, particularly around the area of silencing social dissent.”

That’s far from a theoretical problem in Thailand. The country has been rocked in recent months by unprecedented protests against Prime Minister Prayut Chan-ocha, a former general who led a 2014 coup d’etat, as well as against the monarchy, which has traditionally been treated as off-limits for criticism. Some activists calling for greater freedoms have been arrested, and a sweeping cybersecurity law passed in 2019 gives law enforcement agencies the power to collect information or seize equipment to prevent cybersecurity threats. In August, Human Rights Watch warned that Prayut had “adopted a more hostile stance toward pro-democracy activists.”

The card system could become a powerful tool for the government to build loyalty and curb dissent. More than $5.6 billion has been spent through the program, which links transaction data to information about personal finances, education, and biometrics using an open-source analytics software called KNIME. A range of services are offered through the card and an associated app, including an allowance for travel on public transit and access to job training and health care.

Officials say that strict privacy measures are in place and that data from the cards is being used only to serve their stated purpose: helping the millions of Thais who are poor enough to qualify for one. “We now have a large enough database to come up with more targeted policies,” says Lavaron Sangsnit, a Finance Ministry official who oversaw the card system until September. “It’s not a one-size fits all approach anymore. All of our efforts will now have a razor sharp focus.”

No-strings-attached cash transfers have become more popular among development economists in recent years, guided by the principle that recipients are better able to decide what they need than bureaucrats. One of the best known is Brazil’s Bolsa Familia, which provides money to families who ensure their children attend school and get necessary vaccinations. Other countries, meanwhile, have turned to sophisticated digital systems to deliver existing welfare benefits. In India, a biometric identification platform called Aadhaar has enrolled more than one billion people. While an undoubted technological success, Aadhaar has been dogged by problems with security, including data leaks and thefts. There have also been allegations by privacy activists that it could be used for improper surveillance, which government authorities have disputed.

Heavily dependent on exports and tourism, Thailand’s economy is expected to contract by as much as 8.5% this year, putting some 8 million jobs at risk. That could drive more people’s annual income below 100,000 baht ($3,200), the threshold for receiving a cash card. To cushion the impact of the pandemic on the poor, the government has increased monthly payments by 500 baht for the final quarter of the year.

Members of the ruling Palang Pracharath Party have not been shy about trying to leverage the program for political advantage. During last year’s general election, some voters said they were told at rallies that they needed to elect government-aligned candidates to keep their card benefits, prompting an opposition lawmaker to file a complaint with the elections regulator. (The agency rejected the allegations.) Since the cards and associated welfare policies are being implemented “at the discretion of the government,” it’s fair to question “whether this could be used for politics,” says Thon Pitidol, an economics professor at Thailand’s Thammasat University who studied the program’s implementation.

Many poor Thais are just happy to have the extra cash—no matter what it might mean for politics or privacy. Liamtong Namwicha, a farmer who lives in the northeastern Sisaket province, says he’s found the card “useful” since getting one more than two years ago. Liamtong, who is currently receiving 800 baht a month, has been using it to buy groceries and household necessities from a store in his village, and says he didn’t know data on his habits was being transmitted to policymakers—but that he isn’t worried about it. “I only use the card to buy instant noodles, vegetable oil, and detergent,” he says. “These are necessary things, so I don’t mind if they know.”

Read next: Japan’s Shut-Ins, Hikikomori, Are Living With Their Parents and Have No Jobs