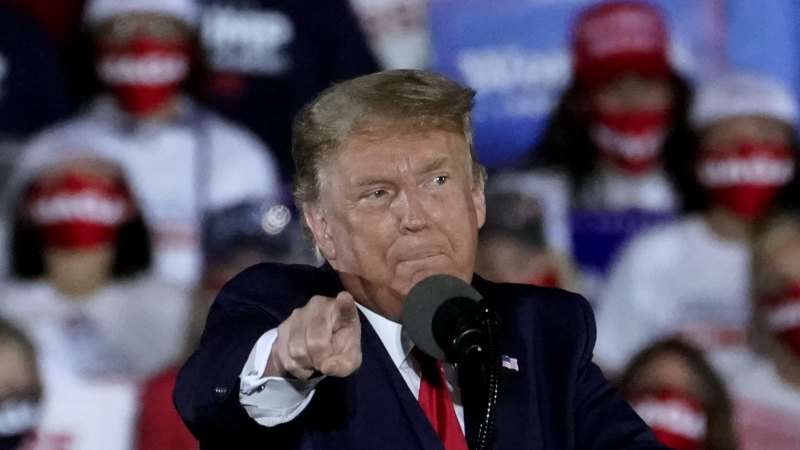 President Donald Trump painted a rosy picture of his financial condition during a televised town hall, calling his hundreds of millions of dollars in debt coming due "a peanut" and saying he had borrowed it as a favour to lenders eager to take advantage of his financial strength.

In fact, the loans, and the unusual requirement he had to accept to receive them, illustrate the financial challenges he faces and the long-standing reluctance of banks to deal with him. 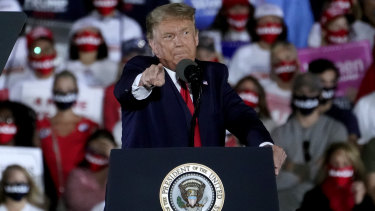 The New York Times investigation found that Trump had personally guaranteed $US421 million of his companies’ debts, with more than $US300 million coming due within four years.  Credit:AP

Trump had to personally guarantee $US421 million ($595 million) in debt, a rare step that lenders only require of businesses that may not be able to repay. The commitment puts his assets on the line and could place his lenders, should he be re-elected, in the position of deciding whether to foreclose on a sitting president.

The personal guarantee also speaks to why, despite Trump's assertion that banks are eager to lend him money, nearly all the money he borrowed in the last decade came from only two institutions.

"When a bank asks for a personal guarantee, it is because the bank isn't satisfied with the creditworthiness of the borrower," said Richard Scott Carnell, who served as assistant secretary for financial institutions at the Treasury Department under President Bill Clinton and now teaches law at Fordham University. "If the captain gives a personal guarantee for the ship, he will be less likely to sink it."

Trump was asked about the debt in response to an investigation by The New York Times published last month based on a review of more than two decades of his tax-return data. The investigation found that Trump had personally guaranteed $US421 million of his companies' debts, with more than $US300 million coming due within four years.

The Times also found evidence that Trump might have difficulty repaying or refinancing the loans without liquidating assets. His main source of income in recent decades — a total of more than $US427 million from entertainment and licensing deals that were fuelled by his fame — has all but dried up. That cash enabled a buying spree of failing golf courses, and propped up those businesses as their losses mounted. In recent years, Trump has burned through most of the cash, stocks and bonds at his disposal and has recently explored the sale of some of his holdings, including the Trump International Hotel in Washington.

The investigation revealed that Trump's finances were under stress, with losses that allowed him to pay just $US750 in federal income taxes for 2016 and 2017, and nothing at all in 10 of the previous 15 years. Also hanging over him is a decade-long audit battle with the Internal Revenue Service over the legitimacy of a $US72.9 million tax refund that he claimed, and received, after declaring huge losses. An adverse ruling could cost him more than $US100 million.

The tax-return data obtained by the Times does not by its nature identify the lender for most of Trump's debts. But the borrowing businesses and largest amounts track with the personal financial disclosures he has been required to file with the federal government as a candidate and president.

The bulk of the debt appears to be owed to Deutsche Bank, one of the few lenders that would do business with Trump in the last decade, even after he defaulted on past loans.

The tax records, for example, show that the largest loan balances at the end of 2018 that Trump had personally guaranteed were $US160 million on his Washington hotel and more than $US125 million on his Doral golf resort. His disclosure forms indicate that Deutsche Bank was the lender on both loans. Trump had also personally guaranteed $US60.3 million of debt owed by one of his entities, DJT Holdings. His Chicago tower, another Deutsche Bank borrower, is among the many businesses he controls through that holding company.

Deutsche Bank is the only mainstream financial institution that has been consistently willing to do business with Trump. And even that lender has required him to personally guarantee what he has borrowed.

As the Times has reported, Deutsche Bank and Trump have had a long and fraught relationship, with the bank at times being hesitant to lend to Trump, including refusing to advance him money during his 2016 campaign.

Deutsche Bank has spent billions of dollars trying to transform itself into a global player, a strategy that has pushed it to take outsize risks that have repeatedly landed it in trouble with US regulators. In recent years, the Justice Department has investigated whether the bank has complied with laws meant to stop money laundering and other crimes. And in 2017, the Justice Department completed a deal with the bank that required it to pay $US7.2 billion for its sale of toxic mortgage securities in the run-up to the 2008 financial crisis. 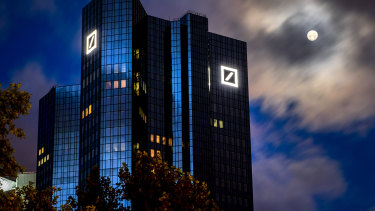 Deutsche Bank and Trump have had a long and fraught relationship, with the bank at times being hesitant to lend to Trump, including refusing to advance him money during his 2016 campaign.Credit:AP

According to Trump's disclosure forms and property records, the only other significant lender to his businesses since 2012 has been Ladder Capital.

Trump's reputation among lenders was sealed over the decades that his Atlantic City casinos repeatedly filed for bankruptcy. Ben Berzin, a retired executive vice president and senior credit officer at PNC Bank who dealt with Trump over the casino loans, said banks got "an expensive education," and the ones that did not demand a personal guarantee got burned.

"They lent on the aura of success," he said. "And things went really wrong."

The debt that Trump has personally guaranteed was only part of the total debt and other liabilities shown in his tax records for the end of 2018. Additionally, Trump's businesses owe more than $US200 million for which Trump is not personally responsible.

During the town hall, Trump said that the $US421 million in debt was not a concern, apparently clinging to his long-held assertion that his net worth is more than $US10 billion.

"What I'm saying is that it's a tiny percentage of my net worth," Trump said.

In a dire situation, Trump could try to sell some assets or properties to cover a loan coming due. But loans are usually based on the profitability of the business borrowing the money.

Tax records for the businesses on which he borrowed the bulk of the money suggest that refinancing may present a challenge. Doral and his Washington hotel, with more than $US300 million in debts coming due, have posted regular losses. And in addition to the debt he owes, Trump has pumped a net of $US261.8 million cash into the businesses to help keep them afloat.

And he appears to have spent much of the cash and investments he had on hand just a few years ago, as his income from entertainment and endorsements began a steep decline.

Carnell, the former Treasury official, said Trump's personal guarantee on the debts put his lenders, primarily Deutsche Bank, in an "awkward" spot, in no small part because banks are subject to federal regulation and Trump has displayed a willingness to push the Justice Department to investigate perceived foes.

"The Donald Trump approach to law is all legal levers would be fair game in pressuring or punishing a bank," he said.