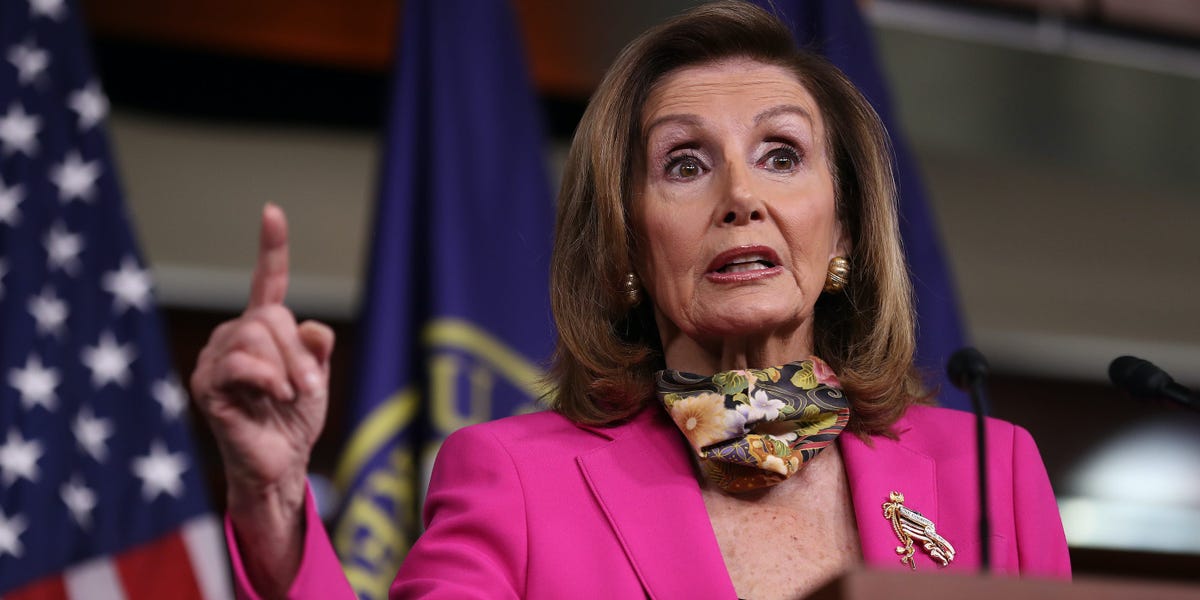 House Speaker Nancy Pelosi said Tuesday that she was "optimistic" of agreeing a stimulus package with the White House by the end of the week, after her and Treasury Secretary Steven Mnuchin established more "common ground" during a phone conversation.

Pelosi is pushing for a $2.2 trillion stimulus package — the White House is offering $1.88 trillion, but Senate Republicans warned Tuesday they would likely block any deal worth $1.8 trillion or higher.

After her latest call with Mnuchin on Tuesday afternoon, Pelosi told Bloomberg: "I'm optimistic because I do think we have a shared value … we want to crush the virus."

When asked about the chances of agreeing a compromise this week, Pelosi said: "That's the plan. That's what I would hope."

Pelosi had previously set a Tuesday deadline for an agreement, but walked that back, and said that a deal agreed this week could pass into law before the November 3 election.

In a letter to House Democrats on Tuesday, Pelosi said her conversation with Mnuchin "provided more clarity and common ground as we move closer to an agreement."

The Tuesday deadline had "enabled us to see that decisions could be reached," she said, adding: "both sides are serious about finding a compromise."

White House chief of staff Mark Meadows told CNBC that he hoped to see "some kind of agreement before the weekend."

Pelosi and Mnuchin had made "good progress" during talks, Meadows said, but added there was still "a ways to go" before a deal was agreed. "We're not just down to a difference of language and a few dollars," he said.

Pelosi and Mnuchin will speak again on Wednesday.

Even if the two sides agree a deal, Republicans in the Senate could stop it becoming law.

At a closed-door lunch with Senate Republicans on Tuesday, Senate Majority Leader Mitch McConnell warned the White House against striking an agreement with Democrats before Election Day, the Washington Post first reported.

Later in a press conference Tuesday, McConnell said that if the House agreed to a comprehensive coronavirus stimulus package, "at some point we'll bring it to the floor," but he didn't specify how long the process would take or whether he would support such a deal.

Pelosi is pushing for a $2.2 trillion stimulus package. The Trump administration's offer has increased to $1.88 trillion, Meadows said, but President Donald Trump said Tuesday he was willing to go higher than even the Democrats were proposing.

Senator Mitt Romney told reporters Tuesday that a stimulus package costing $1.8 trillion or higher would most likely not make it through the Senate. "I don't support something of that level," he said, per Bloomberg.

Senator Richard Shelby also said Tuesday that the White House's proposal was too costly. "I'm not optimistic about us doing anything," he said.