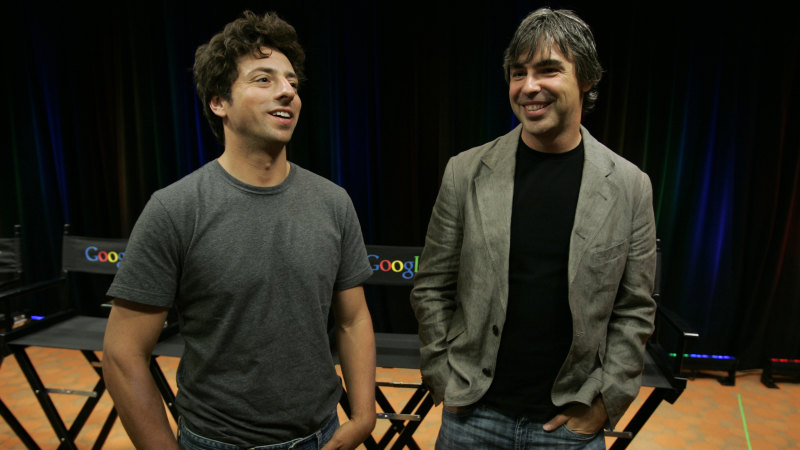 Save articles for later

Add articles to your saved list and come back to them any time.

If timing is everything then Sergey Brin and Larry Page certainly chose the right moment to bow out. Google's founders announced plans to step down from the search giant's parent company Alphabet 10 months ago, just as the first storm clouds of an antitrust crackdown were starting to gather on an otherwise cloudless California horizon.

With a combined net fortune exceeding $US120 billion ($168 billion) and as they dabble in philanthropy and kick back on Senses, Page's 194-foot superyacht, it is not them but their hand-picked successor as chief executive, Sundar Pichai, who has been left grappling with the biggest crisis in Google's 22 year history. 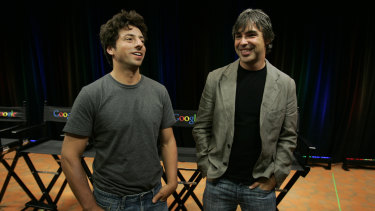 When the Department of Justice joined with 11 state attorneys general this week to file a lawsuit against Google, it represented the government's biggest antitrust complaint since its action against Microsoft in 1998.

What comes next is unclear but it is unlikely to be an easy ride.

Google stands accused of operating an "unlawful web of interlocking and exclusionary businesses" and of wielding its overarching dominance over internet search and online advertising as a powerful weapon to crush competition and hurt consumers.

For Google, Silicon Valley's most free-wheeling big company whose sprawling Mountain View headquarters feels more like an outlying campus of nearby Stanford University than the base for a $US1 trillion corporation, the very notion that it represents a greedy and ruthless monopoly is anathema.

Certainly, the soft-spoken Mr Pichai, an avid cricket fan and impeccably polite software engineer from the south Indian city of Chennai, seems like an unlikely monopolist. He is about as far removed from the top-hatted John D Rockefeller stereotype as it is possible to be.

Nonetheless, Google has plenty to worry about and Mr Pichai will need to brush up his knowledge of US competition law quickly if he is to see off the threat of a break-up of Google's multi-coloured empire.

It runs the gamut from its eponymous search engine to YouTube, mapping and cloud computing services, to its Chrome browser.

Wisely, the DoJ has focused its case quite narrowly – with Google's cosy relationship with Apple, to whom it pays up to $US11 billion a year to ensure its core search engine remains the default service on iPhones, placed at the core of its legal arguments. The DoJ claims Mr Pichai met Apple's Tim Cook in 2018 to discuss how they could collaborate to boost growth in search revenues – a meeting which a top Apple executive later followed up on with potentially incriminating language. 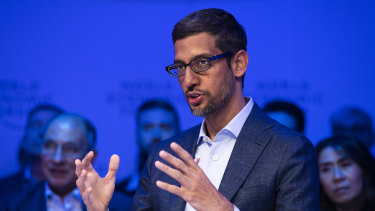 CEO Sundar Pichai has been left grappling with the biggest crisis in Google’s 22 year history.Credit:AP

"Our vision is that we work as if we are one company," read an email to a Google counterpart.

On its own, this may not be a killer piece of evidence, but it offers a glimpse of the direction the DoJ is taking in what is likely to be a lengthy and highly complex case which could take years.

The DoJ's ultimate goal seems to be to reopen the market for internet search, over which Google holds an overwhelming 90 per cent control.

With revenues of nearly $US80 billion in the first half of 2020 alone, Google certainly has the resources to wage legal warfare for as long as it takes.

But as the search giant girds itself for battle, Pichai will also be grimly aware that this may be just the start.

Two separate groups of US state attorneys general are expected to file separate antitrust cases over Google's online advertising and search businesses while the US Congress is also examining whether it and other Silicon Valley giants exercise too much power. Meanwhile, Google is also in the sights of overseas regulators in the UK, EU and Japan.

It doesn't take a genius to realise that the regulatory vacuum in which many tech firms grew up over the past twenty years is coming to an end.

One way or another, the regulators and the trustbusters are coming.

As the storm clouds gather over Mountain View, there is a growing risk that Mr Pichai and his fellow executives find themselves so engrossed in arcane legal battles that they have little time for much else.

For a company led by engineers, rooted in a culture of innovation and the need to launch new products, that is a potentially toxic scenario, which in the long-run could sap Google's greatest strengths.

For as long as the antitrust threat looms, Mr Pichai will struggle to do much more than keep the business ticking over.

Alphabet's overall strategy will remain clouded by uncertainty and the prospect of any potential M&A activity will be effectively ruled out.

That is why within the company, there will inevitably now be a vigorous debate over the best approach to take.

Should Google fight back tooth and nail in an effort to preserve its current structure? Perhaps. But that could be long, painful and expensive process. There is no guarantee of success.

Or does the company take a more pragmatic approach and seek a negotiated settlement – perhaps including an offer to spin off some businesses – its Chrome browser or YouTube video sharing division – to satisfy regulators.

That won't be simple either as there are many different parties and governments involved with competing demands.

It may, however, be a better and simpler alternative that would allow Google to have more of a say in the process – and ultimately to get back to doing what it does best.

There may of course be a further unexpected bonus.

History shows that breaking up big conglomerates is often good news for shareholders in the long-run.

Carefully done, a limited voluntary break-up could turn out to be value accretive, by exposing newly spun businesses to competition. That would be infinitely preferable to a messy, forced break-up conducted under duress.