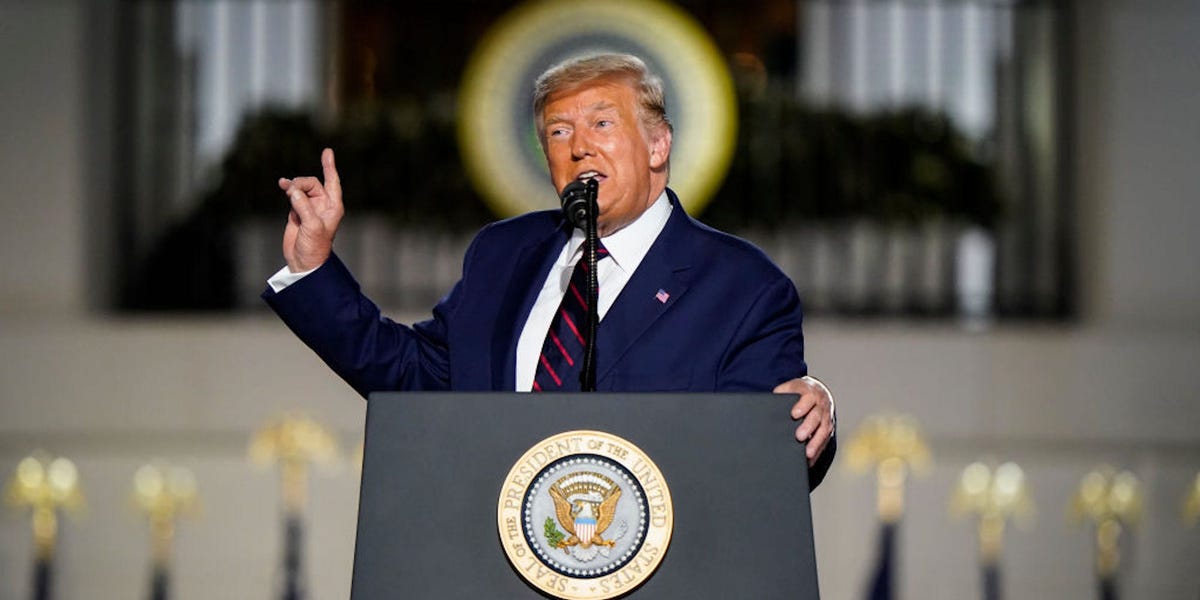 The American economy is in shambles, the result of a pandemic which ended a decade-long stretch of growth and caused a historic wave of job losses earlier this year.

With less than two weeks to go until Election Day, voters are deciding which candidate they want to put it back together — whether in the same image or a new one.

So far, the economy has regained just over half of the 22 million jobs lost from February to April. Both the Democratic nominee Joe Biden and President Donald Trump have made opposing cases to rebuild from the wreckage.

Biden argues the catastrophic public health response from the Trump administration deepened the economic downturn, setting the stage for a highly uneven recovery between the wealthiest Americans and everyone else. He's unveiled plans to smother the virus and get people safely back to work.

Meanwhile, Trump boasts the economy had reached historic heights before the pandemic, even though it was growing just slightly above the same rate as his immediate predecessors. The president contends he can restore that progress, promising lower taxes and deregulation without specifying further.

"It's true the president is probably the single most powerful person with the most influence over it," Aaron Sojourner, a former White House economist who served both the Obama and Trump administrations, told Business Insider. "But nobody has very much control over it."

Here are nine charts that illustrate the state of the economy going back two decades and how Trump stacks up compared to his two predecessors, Barack Obama and George W. Bush.

Economic growth under Trump was barely above both Obama and Bush before the pandemic wrecked it.

Gross domestic product measures the total value of all goods and services that a country produces in a year.

The GDP evenly grew during most of the Bush administration, averaging out to 2.1% per year, according to the Hudson Institute. But the economy contracted sharply during the financial crisis and ensuing recession.

Obama passed a massive stimulus package in February 2009 to jumpstart the economy – and it was successful. The Congressional Budget Office said in a report that GDP growth was likely higher from 2009-2011 in part due to the legislation. It grew 2.3% on average during his second term.

Trump says he built the strongest economy in US history, but that's not the case. When excluding the pandemic's toll, the economy expanded 2.5% on average during Trump's first three years in office — just above both Obama and Bush. It also grew faster in the 1990s under President Bill Clinton.

Read more: An investment chief overseeing $23 billion breaks down 2 critical election-linked risks facing the market — and shares the smartest way to turn them both into profit opportunities

The historical precedent for job gains is mixed.

The economy didn't substantially add jobs early on in Bush's presidency. But it started picking up until the 2008 financial crisis.

The Obama administration moved to stem those job losses early on in his term, and the economy stabilized in 2010. With the recovery underway, employers added jobs, coming out to an average of 224,000 gains per month in Obama's last three years.

Job growth during the Trump presidency had mostly matched its pace under Obama before 2020. In the first three years up to February, the economy added 182,000 jobs monthly on average.

But pandemic-related job losses left a crater in the economy. Many experts say it will take several years for the labor market to recover from the blow.

Unemployment reached a half-century low earlier this year, but it spiked to historic levels during the pandemic. It has since fallen — though it remains high.

The unemployment rate measures the share of the labor force that is jobless and seeking work. It fluctuates based on economic conditions and rises during downturns, as it did during the Great Recession over a decade ago.

The unemployment rate dropped to a half-century low of 3.5% in February 2020. Once the pandemic slammed the economy, businesses shuttered and people stayed home to curb the spread of the virus. It caused unemployment to soar to nearly 15% in April — a joblessness level unseen since the Great Depression.

It declined as businesses reopened and the economy regained a portion of the lost jobs. Now the unemployment rate stands at 7.9%.

The stock market has grown under Trump as well as Obama and Bush, though recessions have slammed it.

The benchmark S&P 500 measures the market capitalization-weighted stock performance of 500 large corporations listed on US exchanges. It's one of Trump's favorite scorecards to measure his economic record, though many economists say the stock market doesn't fully reflect the economy.

The S&P 500 ticked upward for most of Bush's presidency. It then took a severe hit during the Great Recession, though it started a rapid rebound early on in Obama's tenure.

Stocks made considerable gains under Obama, which continued when Trump took office promising tax cuts and deregulation. Then the pandemic floored the stock market, causing it to plunge roughly 30% in March.

But a rebound catalyzed by swift economic-relief efforts and market-leading gains in tech juggernauts like Amazon and Google parent Alphabet have again pushed stocks near new highs.

Read more: A fund manager who's doubling up the competition in 2020 tells us his strategy for investing in the 'K-shaped' economic recovery — and details the only 2 stocks he added as the market recovery took off

Middle-class income fell during the Great Recession. It started climbing afterwards, though cost-of-living increases have undermined those gains.

Median household incomes slipped considerably during the Great Recession. They only started rising during Obama's second term in 2012.

But cost-of-living increases undercut those gains as many goods and services carried larger price tags without similar income growth. Inflation adjusted, household incomes only matched their 1999 level in 2018, per the Census Bureau.

Those incomes continued rising under Trump. It reached $68,700 in 2019, according to the latest data available before the pandemic.

Wages grew steadily under Bush and slowed under Obama. They started picking up again under Trump, but the pandemic's impact skewed this year's data.

Wage growth is usually a good indicator of how much the economy is benefiting average workers. But the chart above illustrates the shortfalls of relying too much on a single metric given the devastation that the pandemic has caused.

Wage gains were steady for most of the Bush administration, ranging between 2% and 4% each year. Then it took a hit during the Great Recession, and wage growth was anemic for much of the Obama presidency.

The initial years of the Trump presidency coincided with a rise in wages as the economy expanded and employers competed to hire workers. They grew above 3% starting in 2018.

Millions of low-wage workers were sidelined in the early months of the pandemic, while many higher-wage white collar workers were able to continue working remotely.

It artificially dragged up the average wage for those still able to work, according to an analysis from the Federal Reserve Bank of San Francisco. It's expected to drop as more hourly workers regain their jobs.

Bush was the last president to inherit a budget surplus and started running a deficit. Obama cut it, though Trump ran bigger ones as a result of his tax cuts and the federal response to the pandemic.

The federal deficit is the gap between tax revenue and federal spending. During periods of growth, the deficit tends to shrink because government spending on safety net benefits lessens.

Bush inherited a budget surplus of $128 billion for fiscal year 2001. It was the last time the US had money left over. The wars in Iraq and Afghanistan, as well as a series of tax cuts, erased it and increased the deficit.

Obama ran large deficits to end the Great Recession, passing an $830 billion stimulus package in 2009. He later cut the deficit over half by the time he left office.

Similar to Obama and Bush, Trump has also relied on deficit spending. It widened by $1.5 trillion with the passage of the 2017 GOP tax cuts, contrary to the administration's claims that the law would pay for itself.

The pandemic, however, prompted $3 trillion in federal spending many economists say was needed to address the public health and economic crises.

Read more: 'I'm extremely concerned': A former Goldman Sachs hedge-fund chief says a flood of troubling signals shows the stock market is teetering — and warns a small correction could soon morph into something much larger

The debt has mounted under every president for the past 20 years. Trump vowed to eliminate it but it never happened.

The federal debt has steadily risen since the beginning of the 21st century.

By the time Bush left office in 2009, it was nearly $10 trillion — double what it was at the start of his presidency. It grew under Obama as well.

Trump vowed to erase the debt within eight years. But that hasn't been the case — especially with a pandemic that triggered a surge in federal spending.

Now the national debt is on track to rival the size of the American economy for the first time since World War II by the end of the year. It stands at $26.5 trillion.

Many economists argue the debt shouldn't be a prime concern for the government while the coronavirus outbreak is ongoing. The Federal Reserve is also expected to keep interest rates near zero through 2023, reducing borrowing costs.

The trade deficit grew under Bush and largely held steady during Obama's terms. Trump pledged to erase it with better trade deals, but it has largely remained at similar levels.

A trade deficit results when a nation imports more goods than it exports. Trump has attacked it as a sign of weakness, though most economists say the US draws much foreign investment from trade partners.

The Bush administration's trade imbalance increased for most of his two terms, partially brought on by additional trading with China as it entered the global economy. Trade decreased sharply during the Great Recession because Americans purchased less.

The trade deficit didn't change much during the Obama administration.

Trump vowed to end the deficit, embarking on costly trade wars with allies as well as China in a bid to redraw existing commerce deals.

But the trade deficit jumped to $67.1 billion in August, according to the Bureau of Economic Analysis. It's the highest in 14 years because the US has imported more goods during the pandemic.