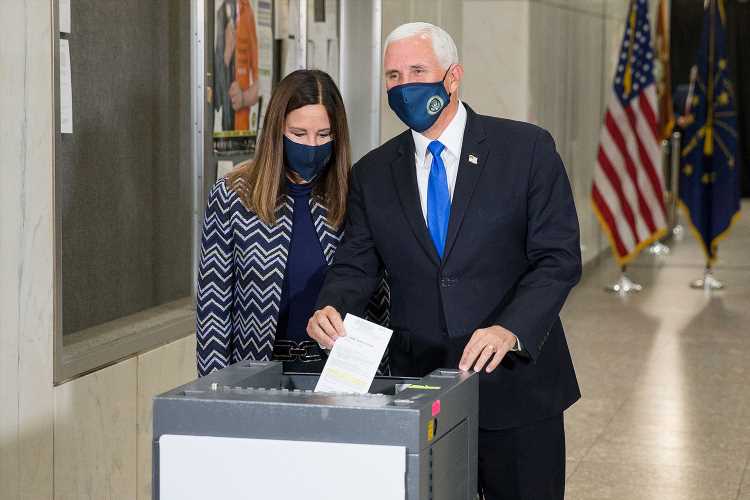 With a thumbs up, the vice president and the second lady wore masks and dropped off their ballots together at the Indianapolis City-County Building.

"It’s a great honor and great to be back home again," Pence, the 61-year-old former Indiana governor, told reporters.

(As is the case wherever the president or vice president travel, the Pences' stop at the ballot box held up the voting line for roughly 30 minutes, NPR reported, leading to some complaining among others waiting in line.)

A pool report on the vice president's travels notes he left the building after it took him about one minute to cast his vote. He and the second lady, 63, are scheduled to traveled to Ohio and Pennsylvania for two campaign events today, before heading back to Washington, D.C. Early voting has gotten underway across the country and tens of millions of Americans have already cast their ballots.

One count this week showed more than 47 million voters have already turned in their ballots, as The Washington Post reports that figure has already surpassed 2016’s total early voting numbers with more than a week to go until Election Day on Nov. 3. At least 10 states sent mail-in ballots to voters automatically, according to the Post, as droves of others adopted the remote voting method this year due to the novel coronavirus (COVID-19) pandemic.

A pool report says the Pences used their absentee ballots to cast their early votes.

Have questions about how to vote ahead of the Nov. 3 election? See PEOPLE’s guide to voting deadlines and requirements for all 50 states here. Or use vote.org to check your state-specific information about registering to vote, voting by mail, early voting, finding your polling place and more. Early and mail voting are already underway across much of the country, while some states also allow voters to register at their polling places on the same day they cast their ballots.