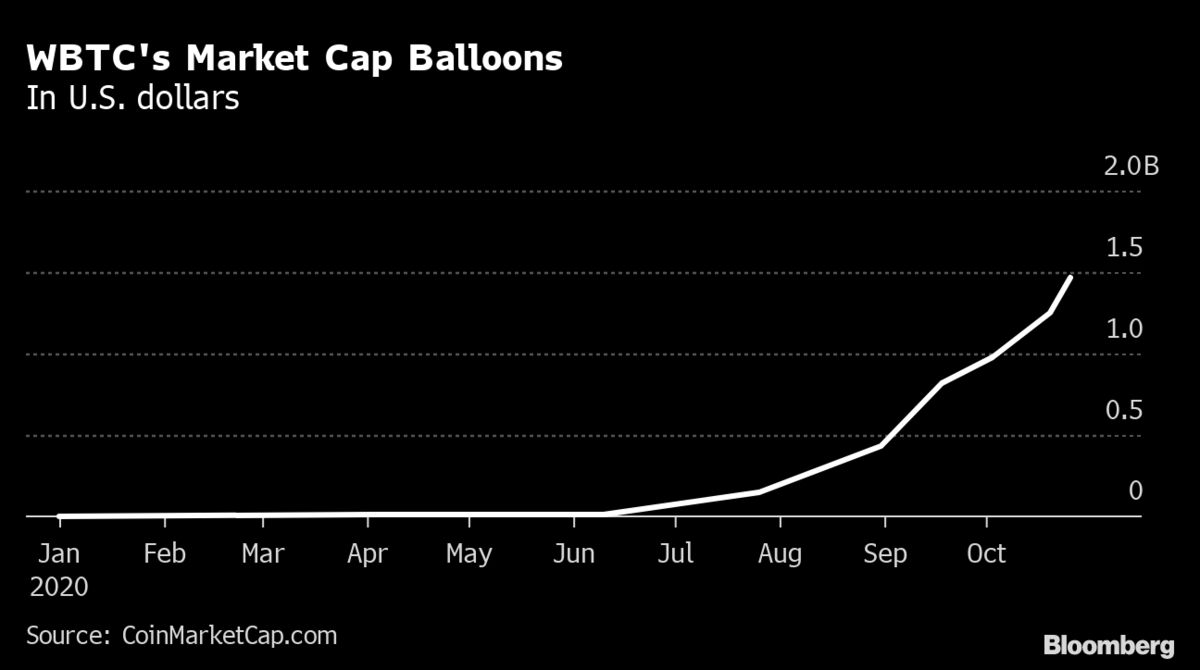 As Bitcoin rallied to its highest level in almost three years, it was getting some unlikely support from advocates of its biggest rival.

Fans of decentralized finance, or DeFi applications, which strive to let people lend and borrow without intermediaries, are using Bitcoin as collateral on the Ethereum blockchain. In so-called Wrapped Bitcoin, or WBTC, transactions users are placing the coin into popular apps like Compound that are generating returns even greater than the almost 90% gains posted this year by Bitcoin.

To get WBTC, an investor deposits Bitcoin with custodian BitGo Inc., which keeps them in a central depository as they are used to invest in DeFi apps. About 0.6% of all minted Bitcoin is already “wrapped” this way, and in two years, the amount could reach 10%, according to Chen Fang, chief product officer at BitGo, which helped launch the product in early 2019 as part of a consortium of crypto firms.

“WBTC has meant there’s more flow-through from the DeFi boom to BTC’s price,” said Sam Bankman-Fried, chief executive officer of Alameda Research, one of the largest providers of WBTC to traders. “It also means that BTC still has a place in a possible DeFi centric future,” where many crypto diehards believe that DeFi apps will eventually displace centralized intermediaries like banks.

Alameda went from providing 26 WBTCs in July to more than 28,400 WBTCs in September, Bankman-Fried said. On Oct. 15, the digital-asset exchange Coinbase Pro listed WBTC, making it easier for people to access.

“DeFi turned Bitcoin into some of the world’s best collateral,” said Bill Noble, chief technical analyst at crypto researcher Token Metrics. “Now you have something else to do with your Bitcoin other than sell it.”

WBTC’s market capitalization has swelled to about $1.5 billion, up from $12.5 million at the beginning of June, according to CoinMarketCap.com. Bitcoin’s price rose about 35% during that period, according to data compiled by Bloomberg.

Miners who ensure the network’s security get paid for posting transactions to the Bitcoin digital ledger. If an increasing pool of Bitcoin just sits there, while WBTC is issued and used on the Ethereum network, Bitcoin miners will earn fewer fees, he said. That could push some of them to switch to supporting Ethereum or another network, instead.

There are plenty of risks with WBTC as well. If a centralized depository like BitGo gets hacked or loses funds, “you are left with that sort of monopoly money,” Noble said. Even more importantly, regulators may not take kindly to wrapped coins, whose use in transactions can’t be traced as easily as Bitcoin, he said.

“Bitcoin is a highly surveilled blockchain,” Noble said. “Everybody and their brother knows what’s going on. This wrapped coin just gives regulators a little bit less transparency. It is a risk to consider.”