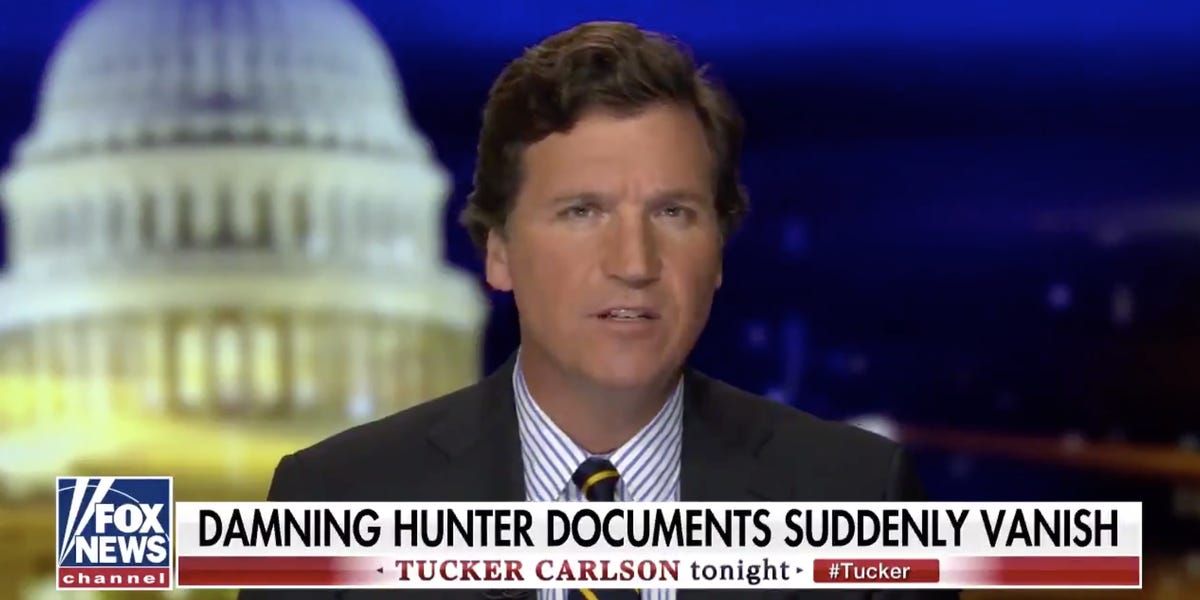 UPS told Business Insider that it is the company which lost a cache of documents which Fox News host Tucker Carlson said on his Wednesday night show had mysteriously vanished in transit.

Speaking Wednesday on his primetime show Tucker Carlson Tonight, the host said that on Monday "we received from a source a collection of confidential documents related to the Biden family."

He continued: "We believe those documents are authentic, they're real, and they're damning."

Carlson did not elaborate on what the documents say. Business Insider has asked Fox News for more information.

Carlson is a strong advocate of President Donald Trump, and has exaggerated the important of supposed revelations about Democratic nominee Joe Biden before.

Earlier this month, Tucker amplified dubious claims by the New York Post that it had found "smoking gun" emails tying Biden and his son Hunter to corruption in Ukraine.

As Business Insider's Sonam Sheth noted, the story was full of holes and red flags.

Describing the lost document on his show, Carlson said they were sent to the Fox News main office in New York, where a producer was meant to ship them to Carlson in Los Angeles.

In an emailed statement, Zaccara said: "The package was reported with missing contents as it moved within our network.

"UPS is conducting an urgent investigation into this matter and regrets that the package was damaged. The integrity of our network and the security of our customers' goods are of utmost importance. We will remain in frequent, direct contact with Fox News as we learn more through our investigation."

Carlson gave some details about the efforts the company went to to locate the documents, but when asked about those details Zaccara declined to comment further.

Carlson said that an employee at a sorting office had "noticed that our package was open and empty."

"Apparently it had been opened," he said, going on to describe how the company's security team interviewed employees and searched the plane and truck that carried it.

"They went through the office in New York where our producer dropped that package off," Carlson continued. "They combed the entire, cavernous sorting facility. They used pictures of what we had sent so that searchers would know what to look for.

"They went far and beyond. But they found nothing."

Carlson's claims about the documents prompted numerous questions, as well as skeptical commentary on social media.

Former RNC chair Michael Steele tweeted saying: "Oh for f*%! sake, seriously? Would have been a better story if your dog ate the damn papers."

Carlson did not elaborate on why the documents are purportedly "damning" to the Biden family, but hinted that they could have an impact on the election.

"As of tonight, the company has no idea — and no working theory, even — about what happened to this trove of materials, documents that are directly relevant to the presidential campaign just six days from now."