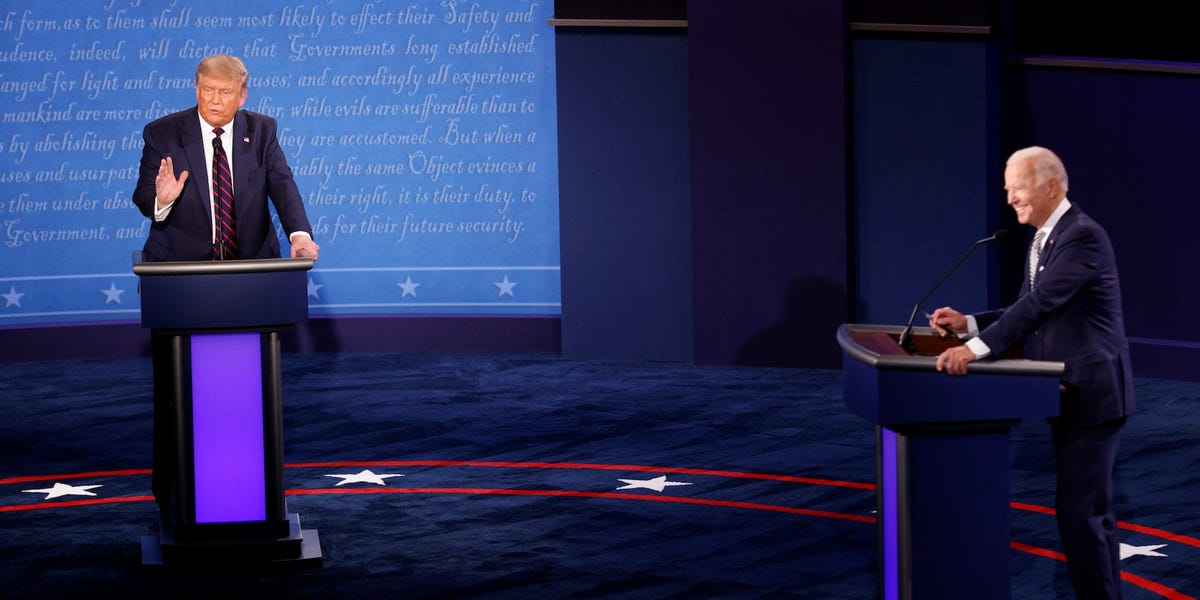 Investors have been spooked all week. Amid another foreboding uptick in coronavirus cases and stalled efforts at an economic stimulus, the stock market suffered its biggest weekly drop since March.

But some traders have been buzzing about an entirely different market phenomena — a monster derivatives trade executed amid the selloff that stands to make a killing depending on how markets react to the US presidential election results.

A single whale investor this week appears to have spent more than $300 million buying up tens of thousands of S&P 500 option contracts that expire in the days following Tuesday's election, betting the market will experience a massive rally, according to trading records and derivatives professionals who were familiar with the trades but not involved in executing them.

The trades — bull call spreads that bet on a specific price range, offering capped gains but also limiting potential losses — have been made in flurries throughout the week. But they follow a similar pattern and share features that caught the attention of traders and brokers: Large, aggressive, short-term call spreads that will profit from the S&P 500 rising significantly in the coming days.

The mystery investor the first three days of this week purchased upwards of 60,000 SPX call spreads that expire on November 4th and 6th — the Wednesday and Friday after the election — according to derivatives professionals and trade execution data from Trade Alert, a subsidiary of Cboe Global Markets. The notional value of the trades is more than $19 billion, but would have been north of $20 billion prior to the S&P 500's plunge this week.

"They're as specific as you can get for a definitive election trade," Henry Schwartz, head of product intelligence at Cboe Global Markets, told Business Insider.

In one trade on Tuesday the client purchased 20,000 SPX call spreads at 3,500/3,600, expiring on Friday, November 6th, according to trading records. Schwartz said the trade would've cost the investor at least $45 million to put on, and presents a potential payout of $200 million if the S&P 500 eclipses 3,600 in the next week.

The same exact trade, but in a bundle of 10,000, was placed the previous day as well, costing roughly $15 million in premium and a potential payout of $100 million, Schwartz said. In a best-case scenario, the trades expiring on November 4th and 6th could payout nearly $600 million.

The identity of the investor and the aggregate total they've wagered remains unclear, but other similar trades, including options that expire on November 13, have been placed throughout the week, a broker told Business Insider, and the total cash outlay likely exceeds $300 million.

An unconventional choice of broker

While it's not definitive, Schwartz and three other options-trading experts Business Insider spoke with said the call spread trades likely belong to the same customer — a customer that most likely isn't a frequent SPX trader — in part because of the distinct fingerprint of the trades, including an unconventional choice of broker: electronic trading platform Interactive Brokers.

"It is a very distinct, short-term, bullish trade. It seems to be one customer going through Interactive Brokers — and not your typical SPX user, not a hedger," Schwartz said.

Three of the sources called it "unusual" that the trade went through Interactive Brokers. Partially, that's because SPX options are a high-touch product — they're more commonly traded with live brokers in the pit, where you're likely to get better pricing than via electronic platforms.

Moreover, the S&P 500 index is typically traded by large investors looking to hedge. Large hedge funds, for instance, will usually place such trades with a major Wall Street bank, which will provide capital commitments to smooth the process.

An Interactive Brokers spokesman declined to comment, noting that they do not discuss clients' trades.

What election result are they betting on?

The highest strike price observed in trades was 3,700, meaning the S&P 500 will have to rise a substantial 13% from Friday's close to reach their maximum payout.

So what election result are these trades betting on?

Two of the options-trading professionals Business Insider spoke with immediately identified it as a bet on President Donald Trump winning reelection. A Trump victory over former-Vice President Joe Biden would present a more business-friendly regulatory and tax environment over the next four years, making corporate stocks more valuable.

"This is a Trump trade," one said, noting Trump's competitiveness in Florida.

Another agreed, but thought it was driven more by Trump's chances in Pennsylvania.

But some Wall Street analysts believe the stock market could also jump on a Biden victory, despite his vows to raise corporate taxes. If Biden wins by a wide margin and Democrats also retake the US Senate — a blue-wave scenario — experts believe a robust economic stimulus could quickly follow, lifting stock prices higher in the short term.

The worst-case outcome for investors is a contested election without a clear winner, which could precipitate a stock slide of as much as 20%, according to Bank of America strategists.

In that scenario, regardless of the ultimate winner, the investor placing the massive call-spread wagers this week would lose all of their money — more than $300 million.

Have a tip? Send internal memos or intel about strategic shifts, personnel moves, or other changes at Wall Street investment banks to the author at amorrell@businessinsider.com or via secure chat on Signal, Telegram, or WhatsApp.