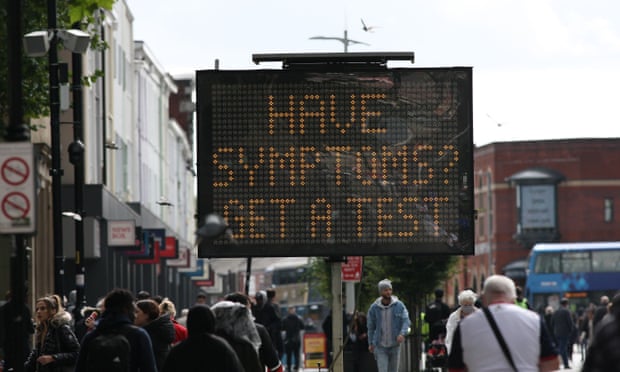 The pandemic has reached a “critical” stage in the UK, with the R number above 2 in some places where infections are rising most, according to scientists. As the second wave spreads across large parts of the country, the average number of new infections nationwide has hit more than 20,000 a day. The daily number of people who have died within 28 days of a positive Covid test increased to 367 on Tuesday this week, the highest since May. It is also significantly a higher number and earlier than forecast by government scientists, who estimated a month ago that 200 daily deaths would be recorded by mid-November.

The increase in people leaving their homes to drive on Britain’s roads over the summer has come to an abrupt end, with mobility data signalling a sharp fall in the autumn. According to Apple mobility data, which records requests made to Apple Maps for directions, driving in October was close to the levels of March, when coronavirus first started to spread widely. Public transport use has also slipped, and remains down by more than a quarter. However, mobility is still far higher than during the depths of the first national lockdown.

Financial markets around the world have sold off sharply as concern mounts over the coronavirus second wave, with its tighter restrictions, and the looming US presidential election. Wall Street had its worst day in more than a month earlier this week, while the FTSE 100 – the leading benchmark of the UK stock market – has slumped over the past month by more than 3% to below 5,600 points.

Inflation returns after eat out to help out

UK inflation rose in September as the price of eating out increased after the Treasury’s eat-out-to-help-out scheme came to an end, and transport and the price of cultural activities increased slightly. The consumer price index (CPI) increased to 0.5%, from 0.2% in August, but the effect of the pandemic on the UK economy means inflation remains significantly below the 2% target the government sets for the Bank of England.

Surveys of business activity show the UK recovery from the first Covid lockdown flattened out this month and in the eurozone threatened to slip into a double-dip recession. As new restrictions to tackle the second wave drag down activity, the IHS Markit/Cips Flash UK Composite PMI data index fell from 56.5 at the end of September to 52.9 for October. A figure above 50 signals economic expansion. Activity levels also fell in the eurozone. Business activity in the US hit a 20-month high, but the pace of growth and new orders eased slightly amid fears over Covid-19 and before the presidential election.

The number of people being made redundant in the UK increased at the fastest rate on record in August, as the fallout from Covid-19 and the winding down the furlough scheme drove up unemployment. According to the latest snapshot for jobs from the Office for National Statistics, redundancies almost doubled to 227,000 while the headline unemployment rate rose by the most in a decade to 4.5%, from 4.1% in July.

UK retail sales increased for the fifth consecutive month in September powered by a rise in spending on DIY and household goods. The ONS said the volume of retail sales rose by 1.5% between August and September, continuing a recovery in consumer spending from the biggest slump on record during lockdown. However, not all shops have benefited and many are struggling. Clothing sales remain 12.7% down on pre-pandemic levels.

Covid continues to drive up the budget deficit

UK government borrowing hit a record high of £208.5bn in the first six months of the financial year, as extra spending to tackle the pandemic pushed the budget deficit – the shortfall between spending and tax revenue – further into the red. The national debt – the sum total of every annual budget deficit – also rose to more than £2.06tn, or 103.5% of GDP. The chancellor, Rishi Sunak, has said he will take “tough decisions” to balance the books. However, economists say Britain should use record-low borrowing costs to invest the UK out of the Covid recession, with the government’s debt interest payments at the lowest levels since the 1690s.

Growth slowed in August despite the eat-out-to-help-out scheme fuelling a rise in consumer spending. Gross domestic product (GDP) rose in August by 2.1% on the previous month – less than expected by City economists – as the rebound faltered in the late stages of summer before new restrictions were imposed. Although continuing a fightback from the deepest recession in history for the fourth consecutive month, GDP remains 9.2% below pre-pandemic levels, and could take years to recover.

Mortgage applications surged to a 12-year high as house prices rose at the fastest annual pace since mid-2016, according to Halifax. The UK’s biggest mortgage lender said demand for more space during the pandemic and the government’s stamp duty holiday had fuelled an increase in demand. According to its monthly house price index, which is used as a key indicator for the UK economy, the average price of a home rose by 1.6% to £249,870 in September. This pushed the annual growth rate to 7.3%, the fastest since June 2016.

More than a quarter of the UK population is now living under tougher forms of Covid restrictions as the UK government, as well as devolved administrations in Scotland, Wales and Northern Ireland, use measures to try to limit the spread of the disease. The impact on the regional economies is expected to be severe, with areas under heightened restrictions accounting for about two-thirds of national GDP. While the hospitality sector in London and the south-east has been hit hard and use of furloughing has been higher than in the north of England, the government has been called on to provide extra support to help former “red wall” towns that already had higher levels of joblessness before Covid hit.