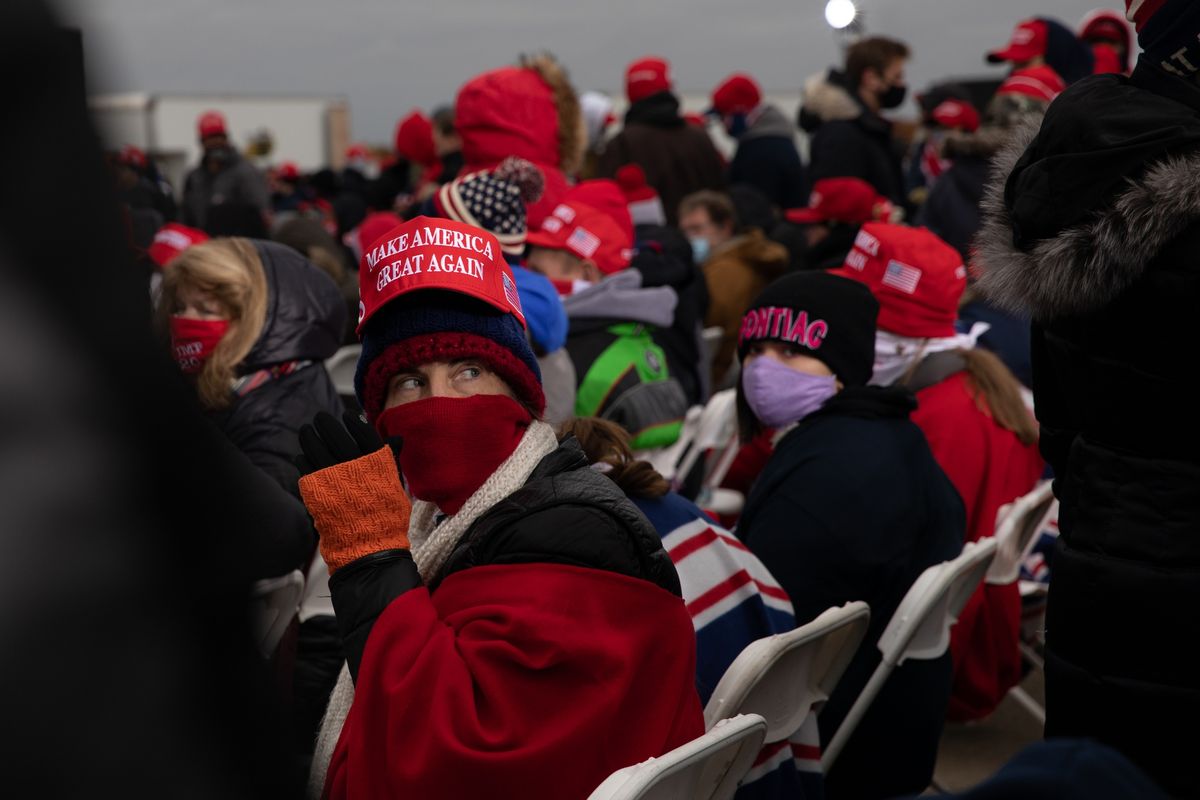 President Donald Trump is banking on inaccurate polling as he seeks to pull out yet another surprise election victory.

But his race against Joe Biden in 2020 is nothing like 2016, making another shocking win even less likely.

Trump has trailed Biden nationally — by an average of more than 8 percentage points in recent surveys — and in polls of core swing states, but the president regularly dismisses them, pointing to his come-from-behind win against Hillary Clinton.

His rally crowds, Trump says, are a sign of a coming “red wave” that he’s predicted will even deliver the House of Representatives to the Republican Party. But the pandemic and economic collapse are weighing on those prospects.

Biden’s lead is bigger and steadier than Clinton’s, and he has been ahead for months. The former vice president’s favorability rating is higher than Clinton’s. State- and district-level polling consistently shows Trump under-performing compared to 2016. And the pool of undecided voters is smaller and looks poised to favor Biden, after favoring Trump four years ago.

While some Trump allies had hoped questions about Hunter Biden’s overseas business activities would scramble the election in its last weeks the way former FBI Director James Comey did in 2016, that hasn’t yet happened, either.

All of that means a Trump win on Tuesday would represent a historically staggering failure by public opinion polls, eclipsing even the 2016 miss. While the president’s chances of being re-elected aren’t zero, pollsters say it’s a long shot.

“If Donald Trump wins, in 2020, anything close to a decisive Electoral College win knowable on election night, that would have repercussions for the research profession that would ripple forever — and deservedly so,” said Jay Leve, chief executive officer of SurveyUSA, a polling firm.

He and other pollsters say the election outcomes range from a blowout Biden win to a closely fought contest that could hinge on recounts and court rulings that either candidate could win. They don’t consider a clear, quick and decisive Trump victory among the possibilities.

“It would be astonishing,” Leve said.

The problem was state polls. Some states were too infrequently polled and presumed to be a slam-dunk for Democrats — such as in Wisconsin and Michigan. In others, such as Pennsylvania, polling ended too early. There was also a larger pool of undecided voters, or voters who disliked both candidates.

As of Friday, Biden leads Trump nationally by 8.9 percentage points, according to FiveThirtyEight’s average of polls. In key states, Biden also is ahead. He leads by average of 8.6 points in Wisconsin, 8.9 points in Michigan, and 5.2 points in Pennsylvania, considered the most likely state to clinch a win for Biden.

Biden has smaller leads across other swing-states like Florida, Georgia, North Carolina and Arizona, while Trump has a small lead in both Texas and Ohio.

The pool of undecided voters is smaller this year and many appear to be leaning toward Biden, pollsters say.

“I think people really wanted Hillary to win so badly, they refused to see the obvious signs that there was trouble,” said Sharon Wright Austin, a University of Florida political science professor. “The difference between then and now is Joe Biden doesn’t have a lot of those issues.”

Don Levy, director of the Siena College Research Institute, cites an example: its last 2016 Pennsylvania poll came out of the field 17 days before the election. And he said pollsters at the institute didn’t sufficiently differentiate the western part of the state, separating Democratic-leaning Pittsburgh from counties around it that buoyed Trump.

This weekend will see a flood of Pennsylvania polls just days before the election, as it’s regarded by pollsters and both campaigns as the likeliest tipping-point state. If they show Biden up 6 or 7 points in the state, said the director of the Monmouth University Polling Institute, Patrick Murray, “then it would take either a polling miss of proportion not seen in 70 years, or some chicanery” for Trump to win.

“Four years ago, Donald Trump threaded the needle,” Murray said. “This year, the eye of the needle is smaller.”

For the polling industry, 2016 was so seismic that the American Association for Public Opinion Research performed a sort of autopsy to sort out what happened. It found that national polls were “generally correct” but that polls “clearly under-estimated Trump’s support in the Upper Midwest.”

The study found three main explanations for underestimating Trump: a real change of vote preference in the final week of the election, over-sampling of college graduates in many polls, and a preponderance of so-called “shy Trump voters” who were uncomfortable acknowledging their preference to pollsters.

The study recommended a greater emphasis on state-level polling. There’s been more in 2020. Pollsters have also further refined their methodology to try and avoid 2016 pitfalls, such as oversampling college-educated voters.

“The difference at least for us this time, from 2016, is the rigorous installation of quotas,” Levy said — a requirement for specific sample groups in every poll. In Florida, for example, his firm has 42 separate quotas to meet — a rigorous undertaking made harder by distrust with pollsters and evolving communications technology.

“We make more calls than we ever had in order to fill those quotas,” he said.

But doubts about the polls linger. Markets closely tracked pollster ratings of the 2016 race but have stubbornly continued to price in a higher chance of Trump winning than is shown in polls, according to a research note by JPMorgan Chase & Co.

“This divergence can be attributed to a perception that polls are likely to miss the mark once again,” the authors wrote. They emphasized the small pools of undecided and third-party voters, and said markets may simply be betting on a election turning point, rather than a polling error.

Most pollsters don’t think that Trump voters routinely lie about their actual preference.

“The lying directly to pollsters I don’t think really is the problem,” Siena’s Levy said. “The bigger problem is they hang up on us at a rate greater than other voters. And so we remain concerned about that to a certain extent.”

“I would say that he’s holding a stronger lead than Clinton, but in a different coalition,” Kimball said of Biden. “We’re also not seeing the tightening in some of these states that we saw with Clinton and Trump.”

Still, voter turnout is the wild card and certain states remain close, he said. “Those are tight races that could go either way and turn it into a blowout or turn it into a long night,” he said.

Monmouth’s Murray says it comes down to whether a surprise number of Trump supporters emerge from a pool of people who typically don’t vote.

“There’s no question that Donald Trump’s support is incredibly enthusiastic — loyal to him to a fault, they love him and they will follow him wherever he goes, including believing that there are a whole host of secret Trump voters who are going to show up on election day,” Murray said.