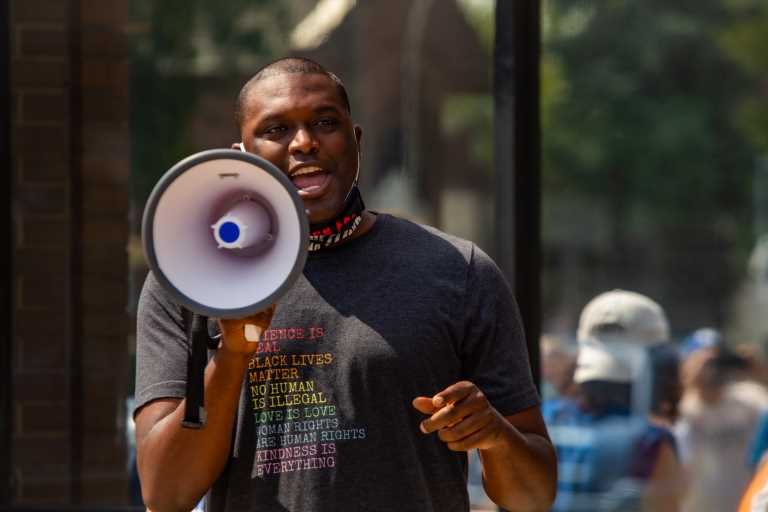 Mondaire Jones likes to say that, for him, policy is personal.

The mantra is more than just a campaign sound bite for the 33-year-old New York Democrat who this summer won a hotly contested primary to all but ensure he’ll win the state’s 17th Congressional District, which covers a suburban area just north of New York City. Jones, who is black and openly gay, was raised in public housing by a single mother whose family fled the Jim Crow South. He understands the imperative of legislating for the marginalized because he came from the margins himself. It’s what led him to support Medicare for All, the Green New Deal, canceling student debt, and other progressive positions aimed at closing the gap between the haves and the have-nots.

A Harvard Law School graduate who worked in President Obama’s Justice Department, Jones was wary of running for office until he saw fellow New York City progressive Alexandria Ocasio-Cortez shock the nation by unseating longtime Rep. Joe Crowley a few miles away in the 14th District. “I came to the conclusion that I, too, could do that based on what I had to offer my district and the country,” Jones tells Rolling Stone. “And frankly I was really upset at people in Congress who were not fighting hard enough for the things that we say we believe in as a Democratic Party.”

For Jones, enacting meaningful change begins with securing the right to vote for all Americans. “When we do that, it lays the foundation for Medicare for All, for universal childcare, for a Green New Deal, for racial justice and LGBTQ+ rights and equal treatment under the law,” he says. “If I could do anything it would be to make sure that everyone has the opportunity to have their voices heard. When that happens, Democrats win.”

But securing voting rights is not going to happen so long as the Supreme Court is packed with conservative ideologues with a penchant for disenfranchisement. It’s why following the death of Justice Ruth Bader Ginsburg and nomination of Amy Coney Barrett, Jones became a vocal advocate for expanding the Supreme Court. While establishment Democrats — including Joe Biden and Kamala Harris — have dodged the subject, Jones has pushed for it in interviews, gone viral tweeting about it, and written op-eds stressing how vital court reform is to preserving American democracy.

“This is a conservative majority [on the Supreme Court] that is hostile to democracy itself, even before Justice Barrett was confirmed,” he explains. “We’ve got to make sure that we act like it, that we work in earnest to expand the court in order to provide the unfettered right to vote, which I believe is a fundamental constitutional right that should not be infringed upon in the way that Republican state legislatures all across the country have been doing, with the Supreme Court as an accomplice.”

He’ll be able work toward making court expansion a reality next year in Washington. He may even be able to lead the charge himself. He’s already said he plans to introduce the legislation.

Jones spoke with Rolling Stone for “The Next Wave”, a new video series spotlighting the politicians and activists shaping the future of America.