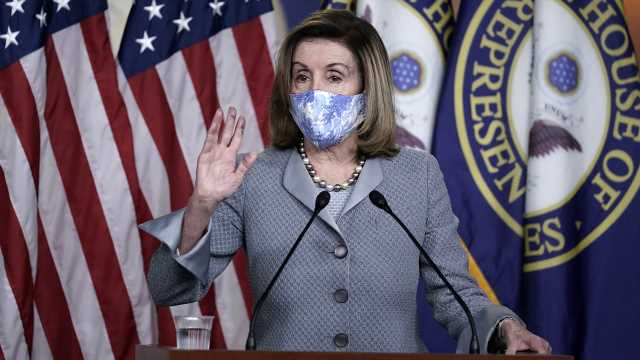 House Speaker Nancy Pelosi, D-Calif., slammed Amy Coney Barrett as an "illegitimate Supreme Court justice" during an Election Day press call, indicating that Democratic attacks on Barrett have not stopped since she was confirmed by the U.S. Senate and sworn in one week ago.

"The president is installing an illegitimate Supreme Court justice just one week before the election, after 60 million Americans have voted, who will dismantle the ACA and won’t say, by the way, when asked by Sen. [Dianne] Feinstein, do you think Medicare is constitutional? She said she really couldn't say," Pelosi said Tuesday.

The GOP-controlled Senate confirmed Barrett’s nomination in a 52-48 vote last week. Sen. Susan Collins, R-Maine, was the only senator to break from her party. Barrett is the third Supreme Court justice appointed by President Trump.

WHO IS SUSAN COLLINS? 5 THINGS TO KNOW ABOUT THE US SENATOR FROM MAINE

Barrett’s appointment to the high court means there are now six justices who were confirmed under Republican presidents, and three justices appointed under Democratic presidents – a balance that Democrats fear does not properly represent the values of American voters.

Democrats flatly rejected the GOP’s push to confirm Barrett just one week before the general election after millions of Americans had already cast their votes.

The move pushed forward by Chairman Lindsey Graham, R-S.C., broke the committee’s rules, which requires at least two members of the minority party to be present in order for there to be a quorum to “transact” business.

Graham disregarded the rules and held the 12-0 vote, without a single Democrat present.

Senate Minority Leader Chuck Schumer, D-N.Y., responded angrily and said, “To call this process illegitimate is being too kind.”

He added: “Senator Graham has broken the rules of the committee to move forward with a vote on Judge Barrett to rip away health care from millions.”

Congressional Democrats have pointed to the GOP’s actions following the death of the late Justice Ruth Bader Ginsburg as hypocritical, as the Republican-controlled Senate refused to review President Obama’s nomination of Judge Merrick Garland in March 2016, citing concerns over appointing a justice during an election year.

"It’s very sad,” Pelosi said. “Because it’s the undoing of the system of checks and balances."

Barrett gave her first questions as a justice during an oral argument Monday, during a remote hearing on a Freedom of Information Act (FOIA) case.

The newest Supreme Court justice will start to hear more hot-button topics starting this week. The court will hear arguments for Fulton v. City of Philadelphia, Pennsylvania — which is a case questioning the city’s ability to require religious groups to consider same-sex couples participation in fostering programs.

The court will also hear a case regarding immigration on Nov. 9, and the long-anticipated review of the Affordable Care Act’s constitutionality will be heard by the court on Nov. 10 under Texas v. California.

Tyler Olson contributed to this report.