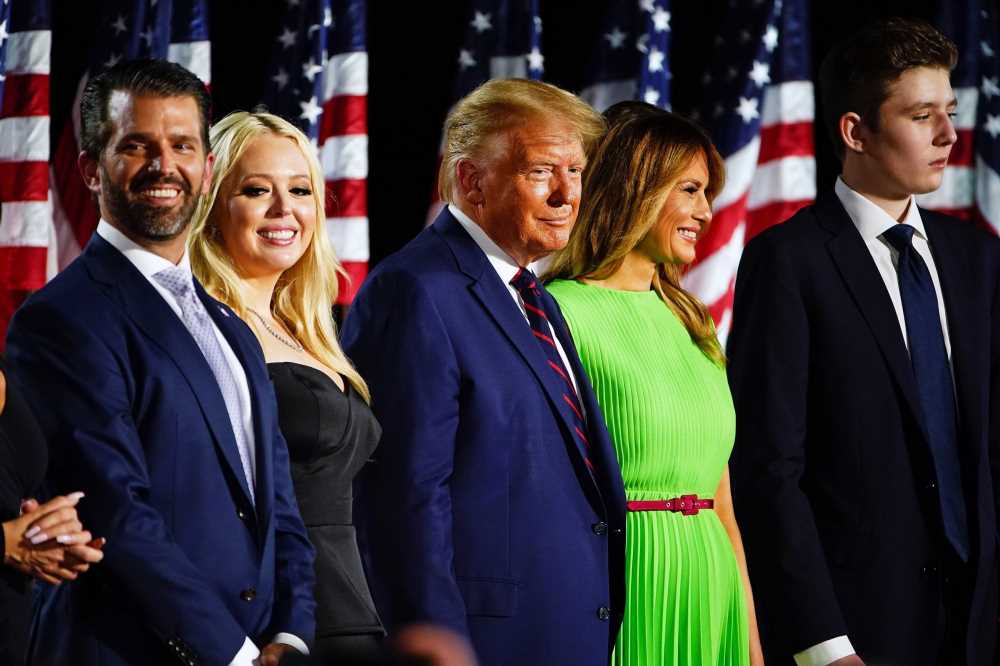 As the 2020 election campaign comes to an end, President Donald Trump's family is gearing up for the next chapter in the political saga that began when they entered the spotlight four years ago.

The president, who was acquitted of impeachment charges in February, has established himself as one of the most controversial and divisive presidents in U.S. history — in part because of the way the real estate mogul has transferred his business ethos to the running of the country.

Trump, 74, has also brought some of his children into the very workings of the White House, which has prompted cries of nepotism from his critics since his 2017 inauguration. (The president shares daughter Ivanka, 39, and sons Don Jr., 42, and Eric, 35, with ex-wife Ivana Trump; daughter Tiffany, 27, with ex-wife Marla Maples; and son Barron, 14, with First Lady Melania Trump, 50.)

"If she ever wanted to run for president, I think she’d be very, very hard to beat," Mr. Trump told The Atlantic in a profile of Ivanka published in April 2019.

Ivanka and her husband, Jared Kushner, are both senior aides to the president. Ivanka and her brothers have also been working the campaign trail as highly effective campaign surrogates, while Tiffany has taken on an increasingly political role throughout the election. (The Trump children's spouses have also made names for themselves in the political arena.) Election Day is coming to a close, with both the president and his opponent, former Vice President Joe Biden, continuing the fight in a deeply divided election. But the story will not be over for the Trump family, no matter the victor.

Here is a look back at how the Trump family has fared since entering the White House in 2016. The former model first entered the White House in mid 2017 after an unusual and unprecedented delay, remaining in New York until after Barron finished school.

Since then, the first lady has defied what is expected of that difficult and nebulous role.

Many critics already wondered about the Trumps' relationship after multiple sexual misconduct allegations were made about the former reality star before the election. Those speculations were heightened as Mrs. Trump mostly refrained from public appearances — and when she did appear, she was sometimes seen swatting her husband's hand away or stood by him without smiling.

But, despite her apparent discontent, reports revealed that the very private first lady does give her husband advice — and holds incredible power (i.e. her call for National Security Council staffer Mira Ricardel to be fired in November 2018).

In May 2018, the first lady launched her controversial Be Best campaign, which is meant to help children combat online bullying and the opioid epidemic. While Mrs. Trump is wont to act as she pleases — such as her visit to the immigration camp at the U.S.-Mexican border in the summer of 2018, where she sported her infamous "I REALLY DON’T CARE, DO U?" jacket, as her husband faced immense criticism for separating families—she has received a great deal of flack for not standing against her husband's more controversial policies.

All eyes were on the first lady after her former friend and adviser, Stephanie Winston Wolkoff, published a biting tell-all memoir this September, which Mrs. Trump's spokesperson has said is "filled with mistruths and paranoia." "She doesn’t care what anyone thinks about her," Wolkoff said in an interview. "That’s true confidence." And, as the election came to a head, the first lady revealed that she and Barron had been diagnosed with COVID-19. They, like President Trump, have recovered. The model-turned-presidential aide's career has been shadowed with controversy ever since her father entered the White House. In March 2017, critics had a field day after reports revealed that Ivanka was getting her own West Wing office, complete with a security clearance for classified information, even though she had no official White House job.

And when she was appointed as her father's senior aide, there were immediate cries of nepotism. Despite the attacks, Ivanka went on to champion women and economic issues, though many were taken aback by her female-centered stance, considering the sexual misconduct allegations that continue to haunt the president.

She and other White House officials also touted her as a grounding force when her father was making controversial policy changes. But Ivanka wasn't able to sway Mr. Trump when it came to his extreme immigration policies or his decision to remove the U.S. from the Paris Agreement.

"That was a low point for me as well," Ivanka said in August 2018 about the alarming reports about children being separated from their parents at the border. "I felt very strongly about that and I am very vehemently against family separation and the separation of parents and children so I would agree with that sentiment. Immigration is incredibly complex as a topic. Illegal immigration is incredibly complicated."

Ivanka has become known for posting tone-deaf images on Instagram during times of national turmoil — and her hunger for power.

"Balancing risk against reward, both Jared and Ivanka decided to accept roles in the West Wing over the advice of almost everyone they knew. It was a joint decision by the couple, and, in some sense, a joint job. Between themselves, the two had made an earnest deal: If sometime in the future the opportunity arose, she’d be the one to run for president. The first woman president, Ivanka entertained, would not be Hillary Clinton; it would be Ivanka Trump," revered journalist Michael Wolff wrote in Fire and Fury: Inside the Trump White House. The eldest Trump son, Don Jr., has become a fierce campaigner for his father — and an attack dog against "liberals" — even as he's navigated personal turmoil.

During his father's impeachment, Don Jr. was also in hot water because of the June 2016 meeting he and other Trump campaign officials had with a Russian lawyer at Trump Tower. (He and the other Trump attendees were not charged.)

And in February 2019, Don Jr. and his wife Vanessa finalized their divorce after 13 years of marriage. But none of his tribulations have stopped Don Jr. from campaigning hard — and, like his father, spreading disinformation and saying shocking things in public forums. Together with Don Jr., Eric runs the family’s Trump Organization while their dad is in the White House.

But his role has become more political as the election campaign has heated up. Last month, Eric disputed a New York Times article that reported the White House showing favoritism toward various companies, special-interest groups and foreign leaders who poured business — and millions of dollars — into Trump's personally owned commercial properties.

The report detailed the president using his elected position to create new streams of income through his hotels and golf courses, while also rewarding the groups and individuals who patronized his properties.

In mid-October, Eric appeared on ABC's This Week to dispute the Times article. President Trump's only daughter from his second marriage to Marla Maples has always struggled with the limelight — but she's attempting to step up.

This past May, Tiffany graduated from Georgetown Law school and was congratulated by her father, though reports have often delved into their difficult relationship.

In 2018, insiders told PEOPLE that behind the scenes, Tiffany’s already strained relationship with her father has hit new lows since he took office in January 2017, with the pair going months at a time without contact.

"Since the inauguration, Tiffany and her father have sometimes gone for months without speaking and she went a very long time without seeing him," a source close to Trump’s younger daughter said. "The last time she was at a family function with him, it was awkward for her and she didn’t feel totally welcome."

Despite their past problems, Tiffany stepped out to support her father in at the Republican National Convention in August. "A vote for my father is a vote to uphold our American ideals," she said. Barron, President Trump's only child with the first lady, has been mostly shielded from the public by his family. His mother, Mrs. Trump, is especially protective of her only son — his needs have always been her primary concern. This fall, one of her fears came true when Barron was diagnosed with COVID-19. (He has since recovered.)

"But again, as so many parents have thought over the past several months, I couldn’t help but think 'What about tomorrow or the next day?' " Mrs. Trump revealed in a statement. "My fear came true when he was tested again and it came up positive."