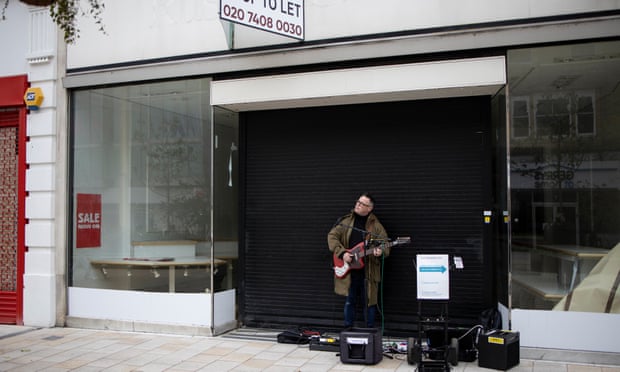 Another 18,000 high street premises could be left empty in 2020, almost double the number in 2019, as the coronavirus pandemic hammers retailers, restaurants and leisure businesses.

AsEngland prepares to enter a month-long second high street lockdown from Thursday, analysts at the Local Data Company warned “vast numbers” of leisure and hospitality businesses could close up for good.

It would leave 14% of high street, retail park and shopping centre outlets vacant in Britain – the highest level since LDC began its survey in 2013. At present just over 13% of those premises are vacant.

The forecast for the full year comes after a net 7,834 outlets closed their doors in the first half of 2020, up 115% on the first half of last year, as shoppers switched to buying online during the pandemic and businesses suffered from the summer lockdown, 10pm curfew and low consumer confidence.

LDC said preparations for more closures had already begun with Burger King, TSB, H&M and Pizza Hut all announcing planned closures in September. It said more restructures were likely as a moratorium on commercial evictions ends next month.

Independent high street businesses have proved more resilient than chain stores during the high street lockdown with fewer than 1% disappearing in the first half of the year.

A net 1,833 independent stores, hospitality and leisure businesses closed their doors in the first half of 2020 or 0.5%, according to new research from analysts at LDC. While 20,019 indie locations closed, it was offset by 18,186 outlets opening their doors with new convenience stores taking advantage of the increased demand during lockdown while barbers and beauty salons also opened despite tight restrictions over the summer.

Just over 6,001 (2.8%) chain stores and leisure businesses became unoccupied in the first half of the year – the highest number of high street closures on record.

Clothing and department stores have seen the biggest shift online as most were forced to close for three months over the summer but betting shops and mobile phone shops saw the highest number of closures.

Lucy Stainton, head of retail at LDC, said: “The latest figures on the GB retail and leisure market tell the story of an immensely challenging few months for the retail and hospitality sector.”

She said independents had fared better as small businesses had lower costs, had benefited from government support schemes such as furlough, lower costs and been able to be more agile, bringing in new products and offering services such as food deliveries.

But she said life would not get easier for retailers and leisure businesses: “These figures mark only the first phase in the impact of the pandemic on the retail economy this year with 20% of the market still temporarily shut and with more months of difficult trading conditions ahead.”