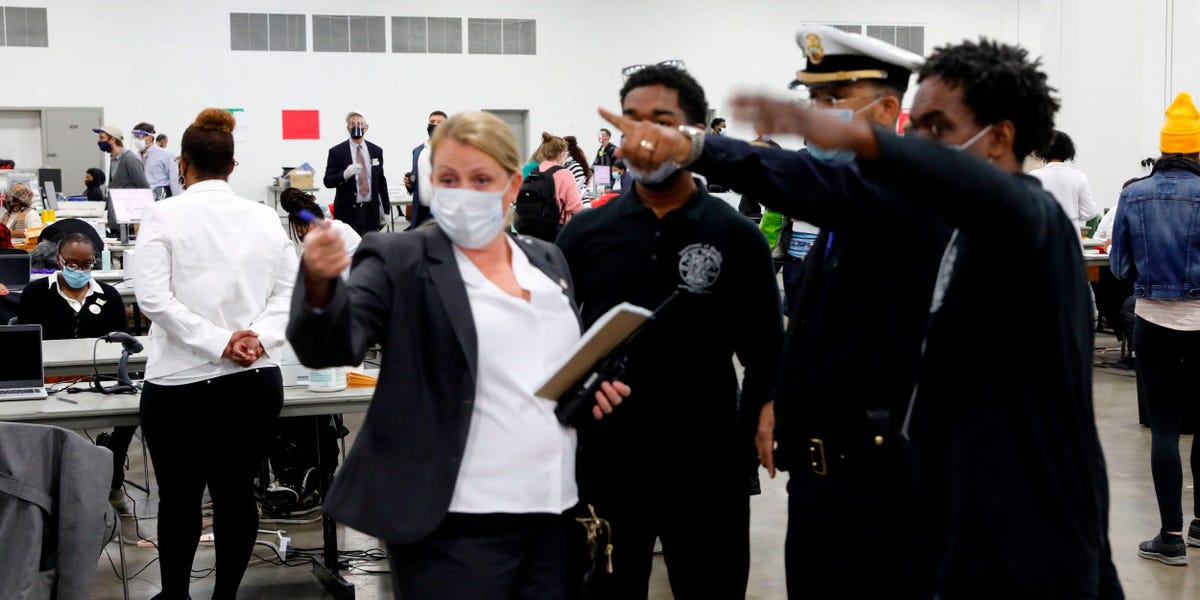 President Donald Trump's campaign began telegraphing its strategy to secure an Electoral College victory in the courts on Wednesday by announcing plans to take legal actions in Pennsylvania and Michigan to halt ballot counting.

"As votes in Michigan continue to be counted, the presidential race in the state remains extremely tight as we always knew it would be," Trump campaign manager Bill Stepien wrote in a statement.

"President Trump's campaign has not been provided with meaningful access to numerous counting locations to observe the opening of ballots and the counting process, as guaranteed by Michigan law. We have filed suit today in the Michigan Court of Claims to halt counting until meaningful access has been granted."

The lawsuit was filed in the Michigan Court of Claims.

Later on Wednesday evening, the Trump campaign filed a similar lawsuit in Georgia, according to the Associated Press. Additional details about this case were not immediately available.

In the weeks leading up to the end of the 2020 election cycle, Republicans and Democrats engaged in a last-minute burst of litigation over Pennsylvania's election and vote counting practices, especially over whether mail ballots from domestic voters should be allowed to arrive up to three days after Election Day.

The weekend before Election Day, multiple outlets, including Axios and CNN, reported that Trump plans to prematurely declare victory on election night if initial results appear to show him leading, and Trump himself said he and his campaign intend to immediately go to court to challenge ballots in states like Nevada and Pennsylvania.

Of all the key battleground states likely to decide the 2020 election, Pennsylvania has experienced the most dramatic changes to its election system. The state previously only allowed absentee voting with an excuse, and had over 96% of its electorate vote in person on Election Day in 2016.

But in November 2019, Gov. Tom Wolf signed a bill into law allowing any Pennsylvanian to vote by mail without an excuse starting in 2020 – the year that the COVID-19 pandemic would end up hitting the US and complicating the jobs of election officials.

The state's June 9 presidential primary was the first election where any Pennsylvania voter could vote by mail without an excuse, and a surge in demand for mail voting overwhelmed county election offices, resulting in hundreds of voters getting their ballots too late or not at all.

Furthermore, Pennsylvania is largely a national anomaly in that election officials aren't permitted to even begin opening and processing, much less counting, mail ballots prior to the time the polls open at 7 a.m. on Election Day.

While Trump has increasingly claimed in recent days that no ballots should be permitted to arrive after Election Day, Pennsylvania has for years permitted ballots from overseas and military absentee voters that are signed and dated by the day before Election Day to arrive up to seven days later, according to the Overseas Vote Foundation.

Trump has also frequently spread inflammatory misinformation claiming there is widespread fraud and election malfeasance in Pennsylvania, and baselessly claimed that "bad things happen in Philadelphia."