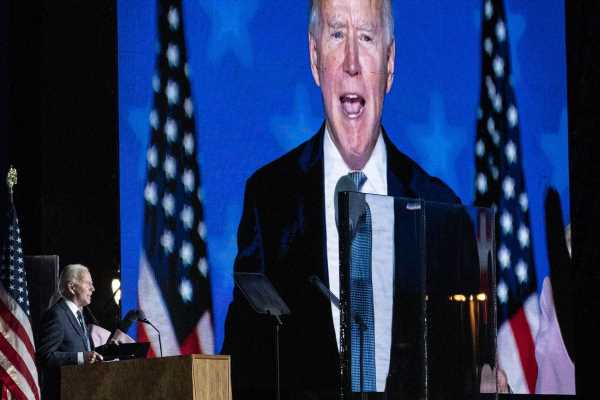 Joe Biden may have the inside track on Donald Trump to win the White House, but his party’s otherwise poor performance on Election Night sets up a gridlock presidency, with faint hopes of achieving liberal policy aspirations.

If he prevails, Biden would become the first president since George H.W. Bush to enter office without control of both the House and Senate — promising him at least two years of stasis and gridlock.

In the immediate term, there will be little incentive for Republicans to give in on the sweeping coronavirus stimulus package Democrats hoped a big election victory could secure. But that battle would likely be the first in a string of GOP efforts to stifle a Biden administration at every turn.

There’s virtually no chance a Mitch McConnell-led Republican Senate would approve Biden’s planned tax hike on the wealthy and corporations, much less a $2 trillion plan to fight climate change he hoped the new revenue would fund. Nor is a GOP Senate likely to entertain expanding access to government health care programs, overhauling the nation’s immigration system, or a major infrastructure package.

Liberals’ most ambitious aspirations -- from expanding the Supreme Court to granting statehood to Washington, D.C. -- stand even less of a chance. And House Speaker Nancy Pelosi -- who could face a leadership challenge and is certain to sustain losses to her majority -- may be unable to provide Biden with crucial leverage in negotiations over the federal budget.

Republicans have already telegraphed that they’re likely to rediscover religion when it comes to deficit spending, after adding nearly $4 trillion in debt during Trump’s first term.

Biden held himself out as the one Democrat who could deal with Republicans in Washington, dating back to his time in the Senate with McConnell. McConnell and Biden cut a deal in the lame-duck session after Obama’s re-election making President George W. Bush’s tax cuts permanent for most Americans, a compromise later criticized by Democrats.

But Biden may find McConnell isn’t the deal-maker he once knew. The majority leader recently had to disappoint even Trump when he couldn’t muster the votes for a large coronavirus stimulus package, a sign that restive Republicans may be in even less of a mood to cut a deal with a new Democratic president.

While six Senate races remain undecided, Democrats would need an extraordinary surge as states finish counting votes to win three of them -- enough for the minimum 50 seats they’d need to control the chamber.

Their prospects of gaining control suffered a setback Wednesday after vulnerable Republican incumbents led by Susan Collins of Maine fended off Democratic challengers.

The concern for Biden is that even if he achieves his decades-long quest for the presidency, his administration will have few tools to enact his agenda or to address the major crises of the Trump presidency, from the coronavirus pandemic to racial unrest.

To be sure, political circumstances can shift quickly in the face of unexpected events, as the pandemic itself proved earlier this year. And Biden has long maintained that his decades of experience on Capitol Hill means he’s more likely than his immediate predecessors to be able to cut deals across party lines.

His allies note that Biden could end up winning even more Electoral College votes than Trump in 2016 while winning the popular vote by millions, arguably granting him more of a mandate to govern than his predecessor.

But Biden’s claim to bipartisan success has often seemed predicated on a decisive Democratic victory that did not materialize.

“If we win as big as we possibly can, there’s going to be a great, great epiphany that’s going to take place, as we Catholics say,” Biden said in July.

And having proven unable to boost Democrats in winnable Senate races in places like Maine, Montana, and North Carolina, his capacity to threaten or cajole reluctant lawmakers in his own party will be limited as he pursues his legislative agenda.

The silver lining for Biden is that he may face less pressure from his party’s left flank. He was reluctant to embrace more radical proposals offered by popular figures like Bernie Sanders, the Vermont senator, and Alexandria Ocasio-Cortex, the New York congresswoman, such as their “Green New Deal” or expanding Medicare, the insurance program for the elderly and disabled, to cover all Americans.

Now, Biden can justifiably say that the votes simply aren’t there.

But liberals are already complaining that a presidential nominee like Sanders might have performed better than Biden, and that Biden’s narrower than expected victory is evidence there’s little enthusiasm for a center-left candidate. And a Biden administration will be hard-pressed to deliver on a signature accomplishment – like Trump’s border wall or President Barack Obama’s health care law – that will cement his legacy and endear him to his party’s base.

His political vulnerability is only underscored by the fact that if he does prevail and become the oldest American ever elected president, he’s likely to face regular questions about his stamina and capacity to govern the world’s largest economy and sole remaining superpower. His campaign’s decision to largely avoid in-person events – citing the ongoing coronavirus pandemic – only provided fodder for Trump and other Republicans, who regularly suggested the Democratic nominee was senile.

Trump himself creates another significant challenge to a future Biden administration. Democrats had clearly hoped that a rebuke at the polls would silence the president, but the early election results suggest that Trump lost re-election even while drawing millions more voters to his cause.

He is likely to remain a powerful influence on the Republican Party, and there is already speculation he may run for his old job again in 2024.

While Biden predicted before the election that GOP lawmakers would lose their “fear of retribution,” Trump’s continuing presence in U.S. politics may only intensify those fears.

Moreover, a Biden victory will have to withstand a concerted effort by Trump and his allies to delegitimize his election. Already on Wednesday, the president repeatedly -- and without substantiation or credibility -- suggested that mail-in ballots breaking for Biden were somehow evidence of fraud.

Some or all of the content shared in this Tweet is disputed and might be misleading about an election or other civic process. Learn moreLast night I was leading, often solidly, in many key States, in almost all instances Democrat run & controlled. Then, one by one, they started to magically disappear as surprise ballot dumps were counted. VERY STRANGE, and the “pollsters” got it completely & historically wrong!

In addition to the disinformation campaign, the president’s team plans a multi-front legal battle, with lawsuits already filed in Pennsylvania and Michigan in bids to swing the vote totals toward Trump’s favor.

But Trump’s push to foment suspicion of the election result also risks alienating voters who may fear their ballots are unfairly targeted –- a narrative Biden’s team promoted Wednesday. If Trump’s actions further sour the electorate, it could provide Biden with badly needed political capital.

“There’s never been one party that has mounted a more sustained attack on the democratic process than the Republican party,” said Biden senior adviser Bob Bauer. “The cynical undermining of the democracy is so brazen, so transparent and the legal strategy on which it’s predicated so cynical it is certainly going to fail.”