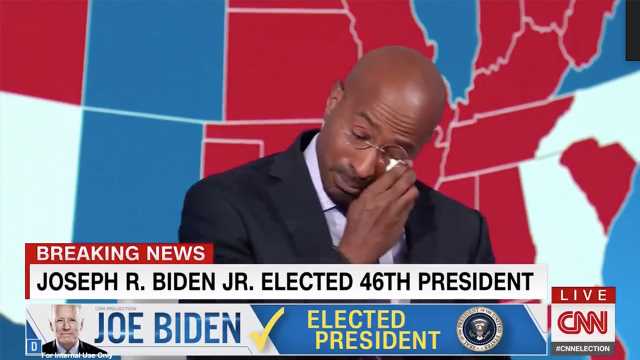 CNN commentator Van Jones had an emotional response to Joe Biden being elected as the 46th president of the United States.

The Fox News Decision Desk projected Biden to win both Pennsylvania and Nevada on Saturday, which exceeded the needed 270 electoral votes to win the presidency.

Jones then pulled out a tissue from his pocket to dry his tears.

"Every day you're waking up, you're getting these tweets and you just don't know and you're going into the store and people who have been afraid to show their racism getting nastier and nastier to you and you worry about your kids and you worry about your sister. And can she just go to Walmart and get back into her car without somebody saying something to her. And you've spent so much of your life and energy just trying to hold it together. And this is a big deal for us just to be able to get some peace and have a chance for a reset. And the character of the country matters and being a good man matters."