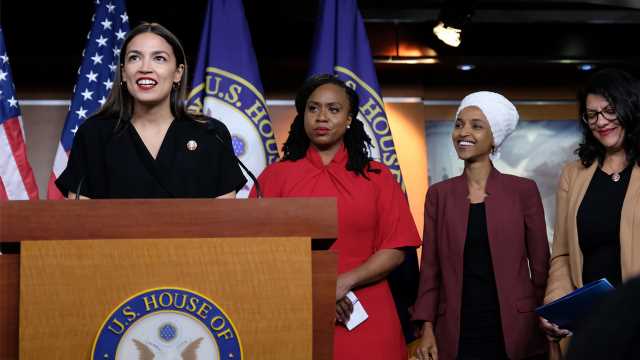 The Fox News Decision Desk projected Biden to win both Pennsylvania and Nevada on Saturday, which exceeded the needed 270 electoral votes to win the presidency.

The iconic group of progressive lawmakers took to Twitter to celebrate who will be 46th president.

Rep. Ilhan Omar, D-Minn., acknowledged the "historic win" but also suggested that a Biden presidency could have the "most progressive agenda" ever.

"Congratulations to @JoeBiden and @KamalaHarris on your historic win!" Omar exclaimed. "We have not only voted out the most corrupt, dangerous president in modern history but have the opportunity to carry out the most progressive agenda our country has ever seen. Let’s get to work!"

"It’s official! Congratulations President Elect @JoeBiden & Vice President Elect @KamalaHarris. You have made history and now, together, we’re ready to make change. Now is the time for bold, people powered policies. Let’s get to work and build a more just America," Pressley wrote.

Tlaib went on to share multiple gifs expressing her excitement.

"Me, trying my best not to rub it in. I am really trying, but it is so hard," she captioned one showing Britney Spears turning around with a huge grin.

Tlaib later tweeted, "Breathe. Heal. Then, let's get to work."

"This past week made me appreciate the saying, 'every vote counts.' Watching the process unfold should help our country realize a vote matters. P.S. I'm good on seeing maps for a while, though," the congresswoman added.