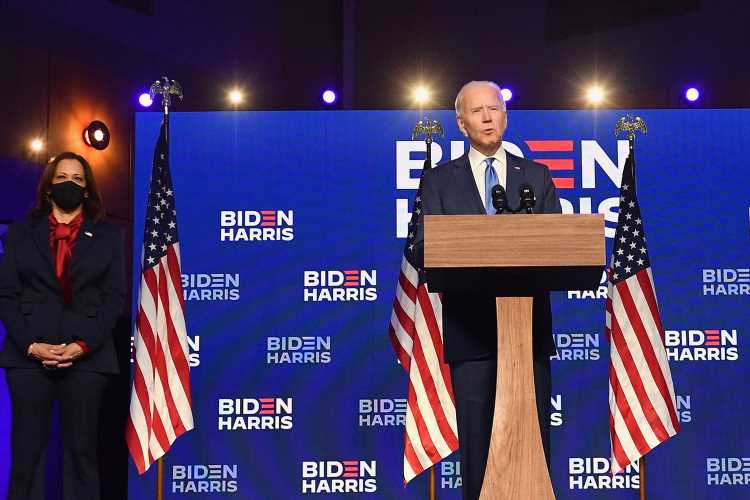 Joe Biden addressed the country once again as ballots in key swing states continue to be counted.

Biden, who took a lead in Georgia and Pennsylvania on Friday, spoke from Wilmington, Delaware, urging for patience — and unity — as the ballots are counted.

Though he didn't claim victory, the former vice president once again said that he is confident he and running mate Kamala Harris will win enough electoral votes for the White House.

Biden, 77, acknowledged the frustration and high tensions across the country as ballots are slowly counted in critical states like Arizona, Nevada, Georgia, and Pennsylvania.

"I know watching these vote tallies on TV moves very slow… as slow as it goes, it can be numbing," he said. "But never forget — the tallies aren't just numbers, they represent votes and voters." "What's becoming clear each hour is that record number of Americans of all races, faiths, religions, chose change over more of the same. They've given us a mandate for action on COVID, the economy, climate change, systemic racism. They made it clear they want the country to come together, not continue to pull apart."

"The people spoke, more than 74 million Americans, and they spoke loudly for our ticket," Biden said, adding that he and Harris haven't been sitting on their hands while waiting for the final results to be called.

"We're not waiting to get the work done," Biden said.

"Yesterday, Senator Harris and I held meetings with groups of experts on public health and the economic crisis this country is facing," he said. "The pandemic, as you also know, is getting more worrisome all across the country." As of Friday, there have been nearly 10 million cases of the novel coronavirus (COVID-19) in the U.S.

"Daily cases are skyrocketing, and it's now believed we could see as many as 200,000 cases in a single day," he said, noting the nearly 240,000 death toll this year from the virus and how it has impacted thousands of families.

"We have serious problems to deal with," he continued. "COVID, the economy, the racial injustice, climate change. We don't have any more time to waste on partisan warfare."

"More than that, we have such an incredible opportunity to build the future we want for our kids and our grandkids. I've said many, many times — I've never been more optimistic about the future of this nation. There is no reason we can't own the 21st century. We just need to remember who we are. This is the United States of America. There's never been anything we've been unable to do, unable to accomplish, when we've done it together."

The previous evening, in his first appearance since election night, Trump made a very different speech, declaring the many ballots cast against him as fraudulent "If you count the votes that came in late, we're looking to them very strongly, but a lot of votes came in late," Trump told reporters, where he spoke from the West Wing's press briefing room.

Elsewhere in his speech, in a kind of zig-zagging tone of dismay and celebration, Trump touted other Republican successes in Tuesday's election including their Senate wins. He also boasted about the swing states he did win — such as Florida, Ohio and Texas — and he compared pollsters' incorrect projections to "interference," complaining that "big media, big money and big tech" had aligned against him.

"They’re trying to rig an election," Trump said after complaining about the Democratic advantage in mail ballots. (Republicans, conversely, have strong showings on Election Day itself.)

"It’s amazing how those mail-in ballots are so one-sided too," he said.