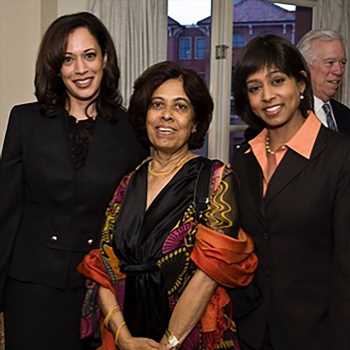 Kamala Harris has made history yet again.

With Joe Biden’s win against Donald Trump in the 2020 presidential election, project by The Associated Press on Saturday morning, Harris will not only be the first woman vice president but also the first Black person and first person of Asian descent to hold the office. (Her husband Doug Emhoff, a fellow attorney whom she married in 2014 after being introduced by a mutual friend, will also become the first-ever "second gentleman.")

A longtime prosecutor before being elected to the U.S. Senate in 2016, Harris has built her political career in part on what she once described to PEOPLE as "the ability of the American people to be able to see what can be, even if they've never seen it before."

"Every position that I went for, people said, 'It's not your time, it's not your turn, nobody like you has done it before, they're not ready for this, not ready for you.' But I didn't listen," she told PEOPLE last year. "And I'll tell you, the optimism that I take away from that experience is that not only did I not listen — but the voters didn't listen and I won."

Harris was born in Oakland, California, in 1964, the daughter of immigrant parents. Her mother, Dr. Shyamala Gopalan Harris, a cancer researcher, came to the United States from India while her father, Donald Harris, an economist, was born in Jamaica.

Growing up in California, Harris was exposed at an early age to both activism (her parents were active in the civil rights movement) as well as the challenges of navigating racism.

In a headline-making primary debate challenge to Biden last year, Harris referred to the days when, as a kindergartener in 1969, she was bused to a majority-white school as part of desegregation efforts.

"It was the only thing I knew," she recently told PEOPLE. "You take the bus and you go to school. Sadly, we're still looking at a moment in time … where American schools are deeply segregated, because they are segregated based on income."

Harris has also credited her mother for raising her to be proud of her identity.

"My mother understood very well that she was raising two black daughters," Harris wrote in her 2019 memoir, The Truths We Hold. "She knew that her adopted homeland would see Maya and me as black girls, and she was determined to make sure we would grow into confident, proud black women." "They were the heroes growing up,” she told The San Francisco Chronicle in 2009 about her desire to become a lawyer. “They were the architects of the civil rights movement. I thought that that was the way you do good things and serve and achieve justice. It was pretty simple."

As for her decision to become a prosecutor, Harris told The New York Times that having grown up in a community “that was often on the not-great end of law enforcement” she wanted to “go inside the system, where I don’t have to ask permission to change what needs to be changed.”

Harris served as the San Francisco district attorney from 2004 to 2011 and went on to become the first Black woman to be elected as California attorney general, holding office from 2011 until 2017, when she was elected to the Senate. While Harris has one of the most progressive voting records in the Senate, she has faced criticism from her time in law enforcement, particularly from liberals. Nonetheless, Harris has said she does not "regret" beginning her career as a prosecutor. "I know we were able to make a change, but it certainly was not enough," she told the Times in June.

Harris ran her own campaign for president last year, before dropping out of the race in December. She endorsed Biden in March, once there were no more women in the running — and was named as his vice presidential pick in August.

On the campaign trail, Harris has also had to deal with some conservatives dismissively and exaggeratedly mispronouncing her first name, including Senate colleague David Perdue.

"I think that the name that your parents gives you, whoever you are, meaning whatever your gender or race or background or language your grandmother speaks, is a very special thing," she recently told PEOPLE.

"Many cultures have naming ceremonies. It is a gift that is an incredible, familial gift. The family gives the child a name and so I come at it from that: not about myself, but for everyone,” she added. “Respect the names that people are given and use those names with respect." Speaking with PEOPLE, Harris said that it was time to "deal with the issue of race in America" and the issue of income inequality.

"The issues impacting the American people right now are not issues that really are even bipartisan, they're nonpartisan," said Harris, who has faced scrutiny from Republicans as being too "radical," while progressives have criticized her as being too moderate.

"When you're talking about people standing in food lines, they're not standing in a line based on what party they're registered to vote with,” she told PEOPLE. "The challenges that we face as a country are clear. We must address them as American issues, not partisan issues, if we're going to actually heal and unify our country.”