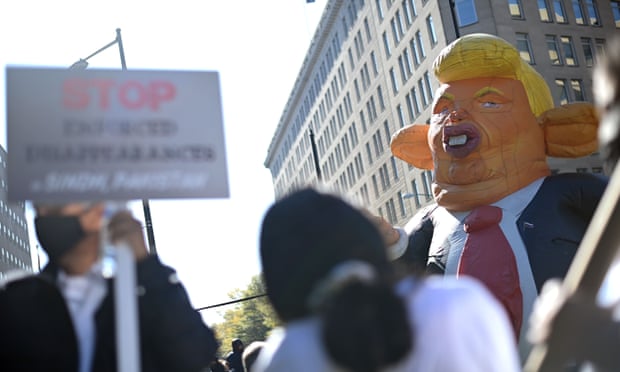 Placards adorned with the slogans “America First” and “Make America Great Again” are destined for landfill now that the trap door of American politics has opened under Donald Trump’s feet. Some will put them aside for a possible return of “the Donald” in 2024 – should he avoid scrutiny over allegedly fraudulent tax returns, and should the Republican party back him again. Otherwise, millions of dollars of election paraphernalia are destined for the bin.

Yet a widespread belief that a change of guard at the White House means the yearning behind the slogans will disappear is naive. Every developed country has its version of America First, not least the UK. After all, what is Brexit if not a demand to put Britain first?

For the past 10 years Angela Merkel has put Germany first, refusing to distribute the huge gains made in export orders from exchanging the Deutschmark for the cheaper euro. The same goes for the Netherlands, Austria and the other rich nations of northern Europe that have hung on to their euro gains while attaching so many bailout strings to those southern countries that lost out – Spain, Italy, Greece and Portugal – that some still, even now, refuse to take all the funds.

The west’s rich nations are told almost daily that collaboration will help them achieve a broad set of goals – ones that will increase the wellbeing of their populations. The International Monetary Fund, the World Bank and the Organisation for Economic Co-operation and Development, supposedly among the most influential of international bodies, say it in all their reports these days. They also argue that tackling rising inequality and agreeing climate emergency goals will build a bridge to a more sustainable economy, for rich and poor alike.

They may sing with one voice, but on these issues they are ignored by the politicians they seek to win over.

A new book, The Upswing, by self-styled “changemaker” Shaylyn Romney Garrett and Robert Putnam, the political scientist who has advised the last three US presidents and the last three British prime ministers, claims to have found the reason for this lack of civility and co-operation. They have tracked the usage of the words “we” and “I” in American books over the past 100 years to reveal a growing emphasis on self and self-help.

The growing use of “I” since the 1970s does not, say Garrett and Puttnam, have much to do with economics. They believe it can be blamed on a dearth of leadership.

Once, there were enthusiastic leaders keen to improve the lot of all peoples – before the second world war (Roosevelt) and in the 1950s and 1960s (Martin Luther King). But such politicians are absent now. The tipping point occurred in the late 1960s, a good decade and a half before inequality began to increase, according to Puttnam.

If rising inequality were the only economic development that sows discontent and destroys cohesive communities, this might hold water. But it isn’t. Rising prices and increasing automation have a huge impact on ordinary families, making them panic about their ability to better themselves.

The authors could also look closer at demographic trends and the growing numbers of baby boomers entering the workforce from the late 1960s. Boomers have, with few exceptions, obsessed about homeownership and building a financial wall around themselves and their families. They tend to vote for social democratic parties in the good times and switch to fiscally conservative parties when anxious about the future. The same applies in the UK.

Today, real estate is the world’s most important asset. It accounts for 60% of the world’s $500 trillion of assets, beating stocks and shares and government bonds into the proverbial cocked hat.

Last week the Bank of England injected another £150bn into the economy as a boost during the second Covid-19 lockdown. What this money will mostly do is protect London’s financial system. And when 90% of high street bank lending is on residential mortgages, what is the financial system? It’s a gamble on real estate.

An ageing middle class which has seen blue-collar workers lose their employment protections and suffer 20 years of wage freezes doesn’t want to go the same way. What better protection than property?

So while many voters in key marginal seats found they couldn’t stomach four more years of Trump, it appears they voted Republican on every other ballot, from their local legislature to the representatives they send to Congress.