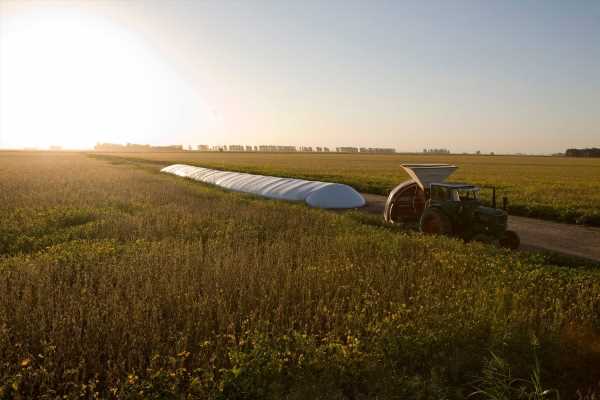 Two-hundred-feet long, several-feet high and packed tight with freshly harvested soybeans, silobags that dot the Argentine Pampas this time of year are worth a hefty sum — almost $100,000 a piece at today’s prices.

So when vandals began sneaking onto farms in the dead of the night and taking knives to the bags, exposing the contents to moisture and rendering them worthless, it got farmers’ attention. These sorts of incidents date back years, they say, but never at a clip like this. The attacks have come in rapid-fire succession in recent months, bringing the total for the year to over 150, according to industry groups.

Theories abound as to what’s behind it all. Many center around the growing tension between the leftist government in power in Buenos Aires and rich farmers in the countryside. As the most popular of them goes, the attacks are carried out by pro-government zealots to scare the farmers into exporting their soybeans — generating much-needed dollars for the cash-strapped country — rather than holding on to them for months as a hedge against a tumbling currency and rampant inflation. Government officials dismiss the idea as baseless.

Whatever the reason, farmers have had enough. In the province of Cordoba, home to a quarter of the country’s soybean output, the local agriculture minister is coordinating the roll-out of a pilot project that would arm the silobags with alarm systems.

“The vandalism is behaving like a virus that expands, directionless and undiscerning, with the sole premise of damaging for damage’s sake,” the Argentine Rural Confederations, a top farm association, said in a statement.

For two decades, Argentine farmers have used silobags to store soy on their fields, with the sausage-shaped polythene containers becoming a symbol of strain between agribusiness and a government hungry for its share of the billions in hard currency that the beans yield when exported.

With the Argentine peso losing half its value in the past two years and interventionist policies on the rise, soy hoarding is getting back to levels of a decade ago when the government and farmers clashed spectacularly.

Hoarding is also a thorn in the side of exporters, who send more soybean meal and oil out of Argentina than anywhere else. Archer-Daniels-Midland Co., which ships Argentine beans unprocessed, highlighted the issue on Thursday.

With hoarding particularly acute at the moment, silobag vandalism has spiked. In response, three companies in Cordoba have joined forces to manufacture bag alarms. They’re on the cusp of starting trials in the province’s Rio Cuarto county, with engineers putting up antennae for signals to detect intruders.

“This can be used to protect tractors or trucks from theft, but there’s an especially big problem with silobags,” said Conrado Berbe, president of one of the developers, Arsit SA.

Berbe hopes to be done with testing this year. If uptake is broad enough, Cordoba will get behind the idea, using public funds to install antennae across the province, said the region’s Agriculture Minister Sergio Busso.

From there, it’s all pretty much like your house alarm. Farmers would purchase a mother node, costing about $90, and several cheaper nodes for each silobag. Information from the devices gets uploaded to a live database that police can see. The service, which costs a few dollars a month per node, means rural patrols then have a chance to catch vandals red-handed.

It’s often hard to know why attacks happen. They can be put down to personal vendettas and trade-union conflicts, though farmers are sure the spike this year is political. That’s because a leftist faction of Argentina’s Peronist movement returned to power in December, with former leader Cristina Fernandez de Kirchner — who used to bunch farmers in with what she depicted as a greedy clique of businessmen imperiling her reforms — becoming vice president.

Farmers were easy prey for Kirchner’s nationalist rhetoric because Argentina has a perpetual balance-of-payments problem that needs all the help it can get from soy exports estimated this year by the Buenos Aires Grain Exchange at $16.9 billion.

Apparently defending Peronist supporters from the idea that they’ve been knifing silobags to frighten farmers into selling the beans, Kirchner retweeted a photo in July of an armadillo with a caption reading: “Cristina told me to rip silobags or she’d turn me into pickles.” (Armadillos and rodents are a bane to farmers because they burrow into bags to snack.)

11.5K people are Tweeting about this


Nevertheless, farm leaders are concerned. “The attacks before were generally down to trade-union problems, but they’re colored differently now, more politically,” said Daniel Pelegrina, head of the Argentine Rural Society.

Just last month, La Nacion reported, a farmer in Cordoba had a silobag ripped open with the slits angled so he could make out the words ‘La Campora,’ the name of a movement that supports the government.

Whatever the motive, neighboring crop provinces are taking interest in Cordoba’s efforts to deter the attacks. “We’ve had calls from Santa Fe and Santiago del Estero,” said Arsit’s Berbe. “Farmers are worried.”

— With assistance by Michael Hirtzer, Sam Hall, and Peter Millard