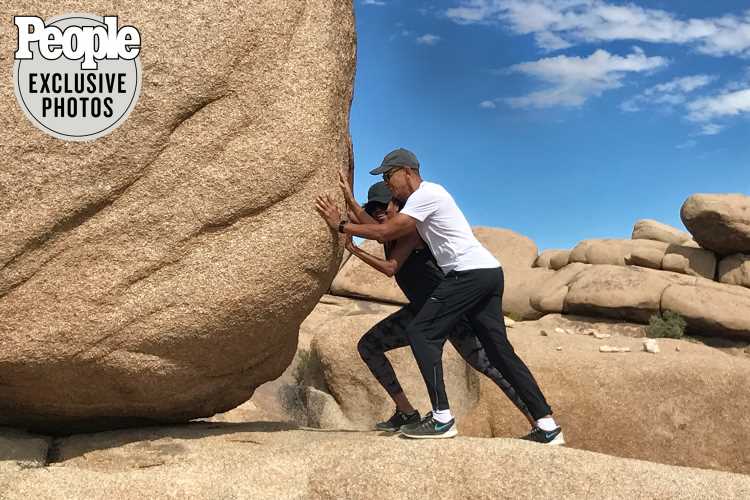 On Their Marriage After the White House “[Mrs. Obama] has been more relaxed and more joyful since we left office. That allowed us to just enjoy the deep love that comes with a marriage this long. But also to be friends again.”

When They Shared Perfect Anniversary Messages

“28 years with this one. 💕,” the former FLOTUS began her caption. “I love @BarackObama for his smile, his character, and his compassion. So grateful to have him as a partner through everything life throws at us.”

—Michelle Obama, on Instagram, on the couple’s 28th wedding anniversary in 2020

“Every day with @MichelleObama makes me a better husband, a better father, and a better human.”

—Barack Obama, on Instagram, on the couple’s 28th wedding anniversary “Like the Beatles said: It’s getting better all the time. Thanks, babe, for 27 amazing years!”

— on Instagram, on the couple’s 27th wedding anniversary in October 2019 “There’s no doubt I’m a better man having spent time with Michelle. I would never say that Michelle’s a better woman, but I will say she’s a little more patient.”

When He Called Michelle His ‘Rock’ “Obviously I couldn’t have done anything that I’ve done without Michelle. Not only has she been a great first lady, she is just my rock. I count on her in so many ways every single day.”

When He Said Marrying Michelle Was His Greatest Accomplishment “If you were going to list the 100 most popular things that I have done as president, being married to Michelle Obama is number one.”

— during his State of the Union Address in 2010

When He Dished on Their Sweet First Kiss “I treated her to the finest ice cream Baskin-Robbins had to offer, our dinner table doubling as the curb. I kissed her, and it tasted like chocolate.”

On the Key to a Happy Marriage “After about 15 years I finally figured out that she’s always right. So surprisingly we just stopped fighting after that.” “Michelle never asked to be first lady. Like a lot of political spouses, the role was thrust upon her. But I always knew she’d be incredible at it, and put her own unique stamp on the job. That’s because who you see is who she is — the brilliant, funny, generous woman who, for whatever reason, agreed to marry me. I think people gravitate to her because they see themselves in her — a dedicated mom, a good friend, and someone who’s not afraid to poke a little fun at herself from time to time.”

When He Tweeted How Proud He Was of Her “Incredible speech by an incredible woman. Couldn’t be more proud & our country has been blessed to have her as FLOTUS. I love you, Michelle.”

— on Twitter, after Michelle spoke at the 2016 Democratic National Convention

When He Called Her His Best Friend “For the past 25 years, you’ve not only been my wife and the mother of my children, you’ve been my best friend. You took on a role you didn’t ask for and you made it your own with grace, grit and style.”

When He Revealed Her Best Quality “Having said all those things, the quality I love most about her is, she’s honest and genuine. I think that comes across to people. They get a sense that they can trust her. You know, the word ‘authenticity’ is overused these days. But I do think it captures what folks are looking for — not just in leaders, but also in friends and in coworkers — and that is, folks who are on the level. People like that tell you what they think and don’t have a bunch of hidden motives. That’s who Michelle is.” “Sometimes, when we’re lying together, I look at her and I feel dizzy with the realization that here is another distinct person from me, who has memories, origins, thoughts, feelings that are different from my own. That tension between familiarity and mystery meshes something strong between us. Even if one builds a life together based on trust, attentiveness and mutual support, I think that it’s important that a partner continues to surprise.”

When He Called Her a ‘Wonderful Role Model’ “The great thing about the girls is they’ve got a wonderful role model in their mom. They’ve seen how Michelle and I interact — not only the love but also the respect that I show to their mom. So I think they have pretty high expectations about how relationships should be, and that gives me some confidence about the future.”

When He Praised Her Sense of Humor “Anybody who knows her well knows she’s got the best sense of humor of anyone you’d ever want to meet. She’s the most quintessentially American person I know … She’s just a wonderfully normal, levelheaded person. Any American woman who meets her would immediately identify her as a fellow traveler.”

When He Admitted That She ‘Upgraded Him’ “Michelle’s like Beyoncé in that song, ‘Let me upgrade ya!’ She upgraded me.” “What I value most about my marriage is that it is separate and apart from a lot of the silliness of Washington. And Michelle is not part of that silliness.”

When He Said He Wasn’t Threatened by Her Success “I’ve got to say, I always found it great if she was making all kinds of money. I didn’t feel threatened by that at all. My grandmother generally earned more than my grandfather when I was in high school, so that probably makes me more comfortable with some of these issues than others would be.”