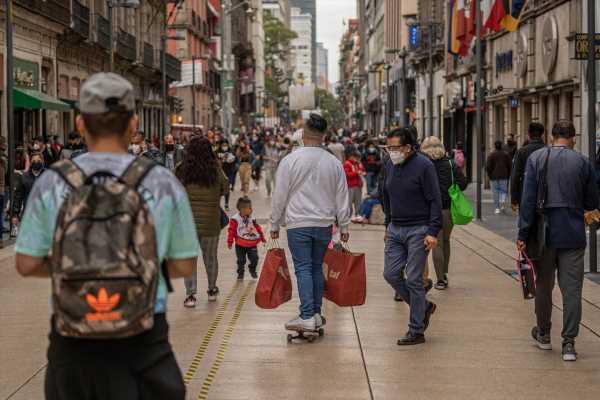 Mexico’s economy grew at the fastest pace in at least three decades in the third quarter, as a surge in manufacturing to meet U.S. demand helped claw back a portion of the output lost since last year.

Gross domestic product rose 12.1% from the previous quarter, according to final data released by the national statistics institute Thursday. The expansion, the best in data going back to 1990, was slightly higher than the 12% growth both estimated by economists in a Bloomberg survey and also recorded in preliminary data published last month.

The data are “slightly better than expected, but the economy is not out of the woods yet,” Andres Abadia, Senior International Economist at Pantheon Macroeconomics wrote in a note. “Output is still about 7.5% below its pre-Covid levels and the economy is struggling in the face of domestic and external headwinds.”

Industrial sectors, including mining, construction and manufacturing, have been driving the nascent recovery, growing 21.7% compared to the prior quarter, while agriculture, livestock and fishing sectors expanded 8%. Service activities including commerce, transportation, financial and media gained 8.8% from the previous three months.

But by most accounts, the record surge won’t last. Analysts polled by Bloomberg predict growth will slow to 0.9% in the fourth quarter, with the economy shrinking 9.2% overall in 2020 — its worst year since the Great Depression.

There are signs the recovery was already slowing at the end of the quarter, according to separate data published Thursday.

Economic activity, a monthly proxy for GDP, expanded by 1% in September, down from a revised 1.35% in August. It was still higher than the median estimate of a 0.9% gain. Meanwhile, industrial activity stagnated, showing no change in September from the month before.

President Andres Manuel Lopez Obrador has rebuffed economists’ calls for bigger government spending similar to other large countries amid the coronavirus outbreak, arguing that a lighter debt load will make it easier for Mexico to rebound.

The percentage of workers living in poverty has grown from 35.7% at the start of the year to 44.5% in the third quarter.

— With assistance by Rafael Gayol, and Robert Jameson