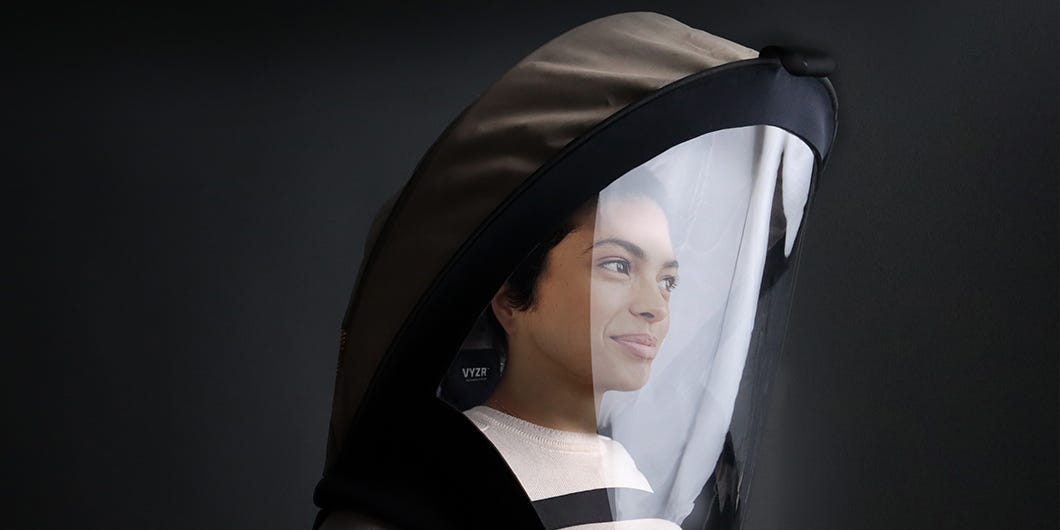 As researchers worldwide clash on the effectiveness of masks, a Canadian inventor of a $379 COVID-19 helmet, Yezin Al-Qaysi, thinks he might have the solution.

Researchers from Copenhagen University Hospital split 6,024 adults into two groups – one with face masks and one without.

From early April to early June, 42 people in the mask group got infected, compared to 53 people in the unmasked group. The difference between the two groups wasn't drastically significant.

"Our study gives an indication of how much you gain from wearing a mask," said Dr. Henning Bundgaard, lead author of the study and a cardiologist at the University of Copenhagen, per The New York Times. "Not a lot."

This doesn't mean that people shouldn't be wearing masks to protect themselves. Masks have shown to help keep people indoors safe from the virus, such as two hairstylists with COVID-19 seeing 140 clients in their salon in June, but not infecting anyone.

The Centers for Disease Control and Prevention (CDC), which advises mask-wearing, cites 28 studies on their website showing that masks, from cloth to non-medical disposable ones, offer protection from COVID-19 to the wearer and the surrounding people.

In the midst of the mask controversy, Al-Qaysi, co-founder of Vyzr Technologies, invented the BioVyzr – a fully encompassing shield that protects from all angles and has a built-in air purification system at the back.

Al-Qaysi, co-founder of Vyzr Technologies, came up with the idea of the BioVyzr for his mother when infection rates began increasing in Canada in April.

"Living with someone who's immunocompromised, I've always known the limitations of masks… in this case it was my Mum," he told Business Insider. "We were really worried about her."

Al-Qaysi said that if you breathe in while wearing a mask, the air can pass through the gaps around your nose and jaw. Even N95 masks that have a filter are "only as effective as their fit," he said.

"In an enclosed space like an aeroplane, if some people don't wear a mask, it invalidates all of the other people wearing masks because those people are breathing in that air," according to Al-Qaysi.

As well as the physical effect, Al-Qaysi focused on the mental impact of not being able to communicate properly with a mask on. "There is a value to opening up our faces again," he said.

Al-Qaysi said the thing that makes the BioVyzr unique is that it not only filters the air the wearer breathes into the visor, but also filters the air going out to protect any surrounding vulnerable people.

The BioVyzr, which Al-Qaysi says he wears all the time, weighs 2.5 kilograms, fully encloses his head, and stretches down to his chest.

Being behind the BioVyzr's anti-fogging face shield isn't the easiest for communication – Al-Qaysi said wearers have to speaker louder and listen more carefully.

"If you have earpods and pair them with a hearing aid app, you can easily turn your earpods into a hearing aid," he said. He also recommended wearers buy a voice amplifying microphone to attach to the hip.

Al-Qaysi said he has got mixed reactions when wearing the shield in public. "Some think it's ridiculous… others just say: 'I don't care whether this looks like an alien invasion – this is something that is going to work for me,'" he said.

Read more: This Google leadership exec quit after months spent meditating under lockdown: 'I could never go back to that lifestyle.'

Since April, Vyzr Technologies' campaign to build the BioVyzr has raised $753,730 on the crowdfunding site Indiegogo. Al-Qaysi said the Toronto-based company has sold "tens of thousands" of the visors and is shipping them mainly to Canada, the US and the UK.

Along with vulnerable people, the visors are targeted to people who are coming face-to-face with hundreds of people every day. Teachers, dentists, healthcare staff, and public transit officers were just some of the people that Al-Qaysi mentioned where social distancing may not be possible and risk of contracting the virus is higher.

Coronavirus has infected more than 59.9 million people globally, and killed more than 1.4 million, according to the New York Times COVID-19 tracker.

More than 60% of Americans say they always wear a mask in public, according to a University of Washington model published October 23. At this rate, the amount of coronavirus deaths in the US could surpass 511,000 by the end of February, the model found.

But if 95% of Americans wore masks, around 130,000 lives from the total figure could be saved, the researchers said.

So whether it's a mask or a head visor, one thing is clear: wearing face protection can curb the spread of the coronavirus and save lives.