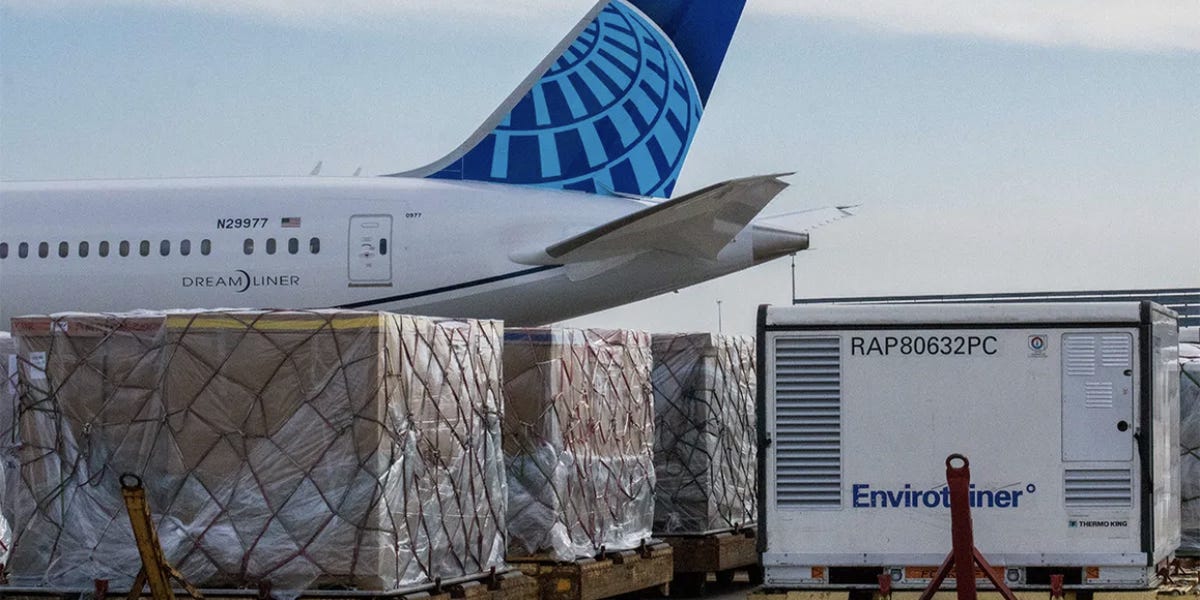 The COVID-19 vaccine has taken flight en route to the US.

Pfizer has tasked United Airlines with transporting the first doses of its vaccine to the US, the Wall Street Journal reported on Friday, in preparation for an expected emergency authorization from the Food and Drug Administration scheduled to come in the upcoming weeks.

A chartered Boeing 777-200 aircraft filled with the pandemic-ending drugs first flew on Friday, the Journal reported, traveling from Brussels, Belgium to Chicago, a United hub. Unlike the daily United passenger flight between the two cities, Pfizer would have likely had the entire plane to itself as a dedicated charter.

United set up a vaccine task force earlier this year for this very possibility and had crafted standard operating procedures for each vaccine as it wasn't initially clear which one would cross the finish line first. In November, it became clear that the two leading contenders would be Pfizer and Moderna.

But transporting Pfizer's vaccine came with a problem: its below-freezing storage temperature requirement of -94 degrees Fahrenheit. Drugs with requirements that far below-freezing are packed with dry ice to keep them at temperature, presenting a problem for airlines tasked with flying them.

Dry ice is classified as a dangerous good in aviation as it sublimates from a solid to gaseous carbon dioxide, which can incapacitate the flight crew and passengers. Regulators limit how much dry ice can be flown on cargo and passenger planes but given the unique circumstances, carriers have request exemptions to these limits in order to fly more vaccine doses in the upcoming airlift to transport doses around the world.

The Federal Aviation Administration granted United an exemption to the dry ice limitation, according to the Journal, allowing the airline to fly more of the drug than it normally would have. As the flight was a charter, no other passengers were onboard, and only essential crew were looking after the aircraft during the flight.

"The FAA is working with manufacturers, air carriers, and airport authorities to provide guidance on implementing current regulatory requirements for safely transporting large quantities of dry ice in air cargo," the regulator said in a statement emailed to Business Insider.

United is now allowed to fly up to 15,000 pounds of dry ice on the Boeing 777-200, according to the Journal, five times the previously allowed limit for the wide-body aircraft. The shipping containers carrying Pfizer's vaccine have around 23 kilograms, or around 50 pounds, of dry ice packed inside of them, according to Julian Sutch, Emirates SkyCargo's global manager for pharma, in a previous interview with Business Insider.

Although operating cargo-only flights with no passengers, the Chicago-based airline still has to comply with regulations for passenger airliners such as the Boeing 777-200, according to Chris Busch, managing director for United Cargo in the Americas, in a previous interview with Business Insider. And even without passengers, all freight flown by United flies in the belly cargo hold and not the passenger cabin.

Most, if not all major airlines with pharmaceutical-carrying capabilities are gearing up to potentially participate in the life-saving airlift as more vaccine candidates enter the authorization process. But unlike the first mass transport of COVID-19 supplies that saw anybody with a plane transport personal protective equipment from China, aircraft operators will face hurdles including adequate storage and limited onboard space thanks to the dry ice limitations of each aircraft.

Pfizer taking the steps to move around the vaccine before its authorization shows the confidence the drug-maker has in the product. Chartering a Boeing 777 can quite easily cost tens of thousands of dollars per hour and multi-day international trips can easily add up, especially as cargo space is now yielding a premium during the pandemic.

Now that it's in the US, Pfizer will rely on over-the-road trucks for regional transportation to its storage facilities until the Food and Drug Administration passes down an approval that will see immediate distribution as the US begins the long journey to herd immunity.

Trucks can better deal with transporting a frozen vaccine as they have higher dry ice limitations than aircraft. From Chicago or one of Pfizer's storage facilities, the vaccine can be on either coast in a matter of days using team-truck driving.