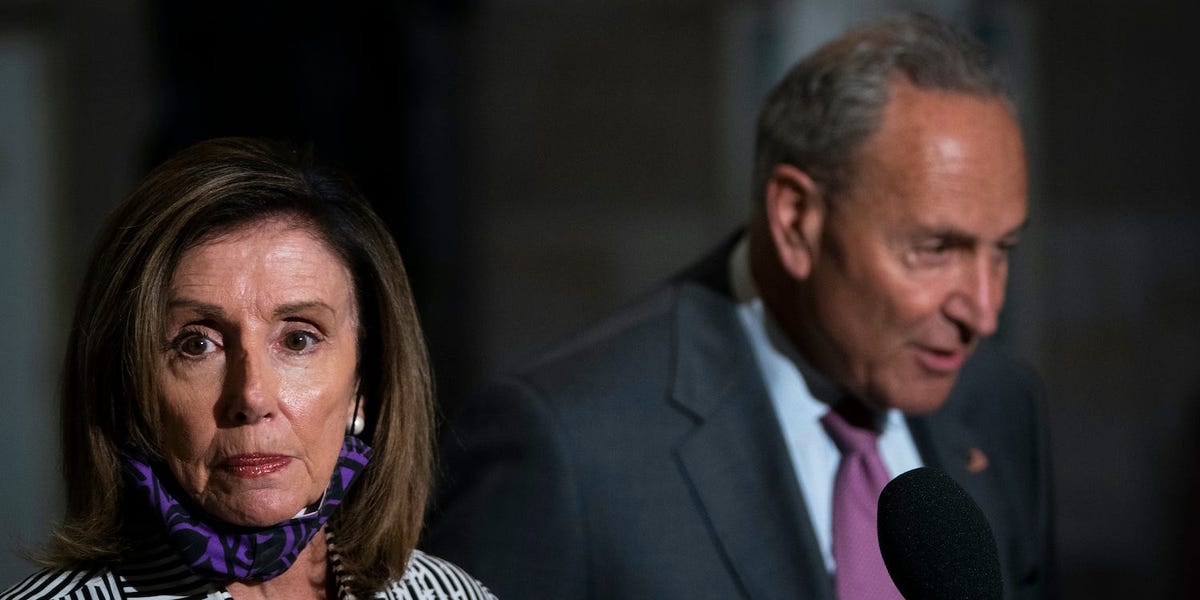 Democrats approached the GOP with a secretive new COVID-19 stimulus proposal at the beginning of the week, amid fierce partisan jostling as to the scale of the relief, The Washington Post reported.

There are no details of what the offer — referred to by Schumer as a "private proposal" — contained.

It adds an extra strand of complexity to the high-pressure negotiations on Capitol Hill, which lawmakers hope will end a months-long deadlock and bring relief to Americans hammered by the fallout of the pandemic.

The additional proposal means that there are now four major ones in play:

Business Insider has requested more detail from Pelosi and Schumer. The Post cited Schumer saying the proposal was meant to "help us move the ball forward," suggesting that it might cede some ground to McConnell.

It had also been sent to Treasury Secretary Steve Mnuchin, Pelosi said in a press statement circulated Tuesday which appeared to refer to the same proposal.

The plan's arrival on Monday appeared not to move McConnell in public. On Tuesday, Sen. Mitch McConnell circulated a plan that barely shifts from the Republicans' original proposal, which has failed to pass twice this fall.

McConnell signaled on Monday that a bill could be agreed before the end of the month.

But that would be a tall order — the Senate is only sitting for a few weeks, and separately has also to deal with a looming government shutdown due to begin on December 11.

The Democratic Party has publicly pushed for a $2.2 trillion relief plan including a $1,200 direct payment to individuals. By contrast, the Republicans favor a bill of around a quarter of the cost, per CNBC.

The bipartisan $908 billion proposal also did not include $1,200 checks.

The situation has caused accusations of partisan stalling from both sides.

"The additional relief that would help families, workers, schools, and small businesses cross the finish line has been held up for months while Democratic leaders pursued an all-or-nothing approach," McConnell said in a statement Tuesday.