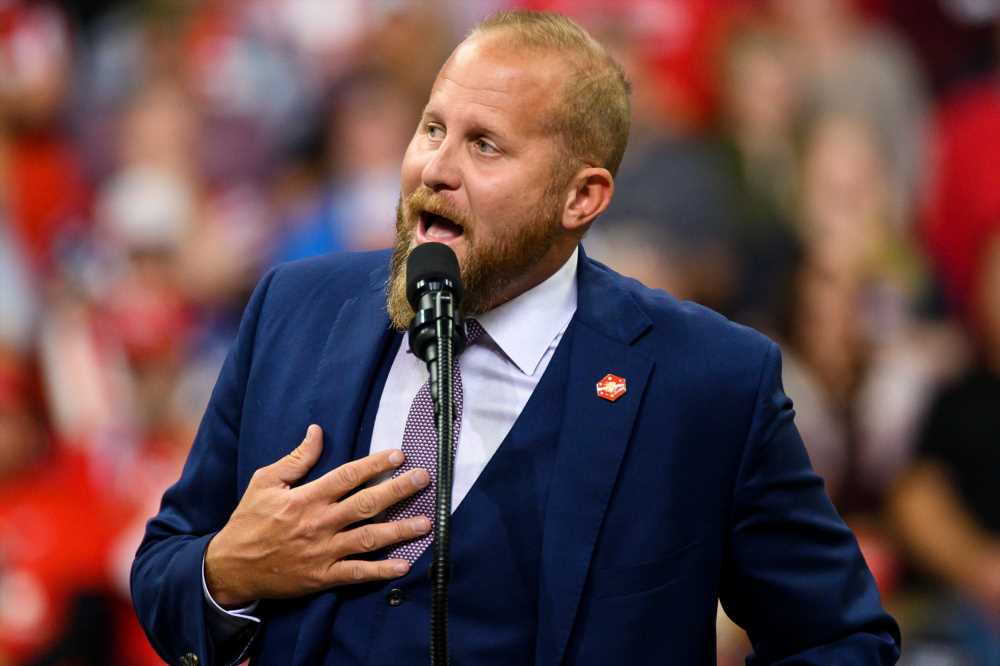 President Donald Trump’s former campaign manager Brad Parscale is speaking out for the first time since police detained him outside his Florida home in September following what authorities described as a drunken altercation with his wife, who worried he was suicidal and initially said he'd hit her.

"My wife and I are in a much better place now,” Parscale, 44, told Fox News' Martha MacCallum on Tuesday, adding, "We’ve never been happier."

Parscale, a key Trump aide until he fell out of favor over the summer, briefly addressed the police incident during a 20-minute interview largely defending his time leading the president's unsuccessful campaign against Joe Biden.

With both his political track record and that altercation in Florida, Parscale said he wanted to "have history remember as it was accurate."

"I’m just glad I’ve moved on … and I feel like I’m healthy, getting better every day," he said.

Parscale was originally taken to the hospital after getting tackled by a Fort Lauderdale officer at the end of his driveway during that Sept. 27 police encounter.

Police took him for treatment under the Baker Act, a Florida law that allows authorities to detain someone to provide medical care if they're deemed dangerous to themselves or others.

Officers said in their incident reports, reviewed by PEOPLE, that Candice Parscale, Brad's wife, originally told them he had cocked a gun in front of her during an argument. She fled their home and found help from a nearby Realtor, who then called 911.

Candice told officers at the time that her husband “has been depressed and suicidal recently,” according to the reports. Police said that "this has led him to consume alcohol a lot more frequently and make suicidal statements.”

Officers also noted in their reports from the scene that Brad smelled of alcohol, and police body camera footage shows him holding a can before being tackled and handcuffed because authorities said he didn't respond to their commands.

When they arrived at the Parscales' home, multiple officers reported Candice had bruises on both her arms, while one officer noted she had bruising and scratches on her face, according to the reports. Authorities said they took photos of her as evidence.

"When I asked how she received the brusing [sic], [Candice] stated Brad Parscale hits her," one officer wrote.

"When asked if he made these markings today, she claimed he did not. I continued to ask if Brad Parscale physically assaulted her in anyway today and she said no, but he did forcibly smack her phone out of her hand when she was attempting to call Brad Parscale's father," the officer wrote.

According to another report from an investigator at the scene, Brad was also seen with injuries on his body which he said "occurred several days ago none in relations to this incident and [police]."

The reports stated that responding police felt "it was evident that" Candice "could not safely be left with [her husband] due to his potential for violence to her and/or himself."

Brad told MacCallum in his interview Tuesday that he and his wife "went through a very stressful time" in recent years, amid the back-to-back presidential campaigns.

He said he and Candice "lost two children during the election," suggesting she miscarried, and he said he had deteriorated over time.

“We were completely attacked by the left, the right, the media. And I got to a bad place. My wife was worried about me, and she helped," Brad said. "And she was there every day, by my side, and I love her for it.” Days after Brad was hospitalized, Candice walked back what police say she told them, saying in a statement to Politico that she was "misconstrued."

“The statements I made on Sunday have been misconstrued, let it be clear my husband was not violent towards me that day or any day prior,” Candice said in a Sept. 30 statement, provided alongside comments from her husband about the incident.

Authorities said in September that Brad was not accused of a crime and that his wife was "not cooperative" with filing charges against him.

He resigned shortly after the incident, having been demoted from his role as captain of the campaign earlier in the summer.

“I am stepping away from my company and any role in the campaign for the immediate future,” Brad said in his Sept. 30 statement to Politico, adding that he intended “to focus on my family and get help dealing with the overwhelming stress.”

Brad was credited, along with a small group of other aides, with helping Trump pull off his surprising 2016 election win and became something of a mini-political celebrity among the president’s supporters.

He frequently spoke at events before the president, took selfies with Trump fans and even appeared prominently in one of his campaign ads earlier this year alongside images of Trump and Vice President Mike Pence.

But he also bore criticism as the president struggled against Biden — lagging in the polls and in fundraising as Trump drew increasing scrutiny for how he downplayed the novel coronavirus.

Speaking with MacCallum this week, Brad repeatedly defended his decisions and implied he had been unfairly singled out even as he remained convinced he could have helped Trump win. In one widely derided event, Brad had publicly bragged that there were “over” a million tickets requested for a June rally in Tulsa, Oklahoma, amid the coronavirus pandemic. But the president ended up drawing only about 6,200 people to the 19,000-seat Bank of Oklahoma Center.

Brad told MacCallum that, in his view, Trump's one mistake was not being more empathetic about how the virus was threatening and had harmed people.

Brad's voice was emotional when he told MacCallum on Tuesday that he hadn't spoken with the president recently.

"It is pretty hurtful, but it's probably just as much my fault as his," he said. "I love that family, and I gave every inch of my life to him. Every inch."