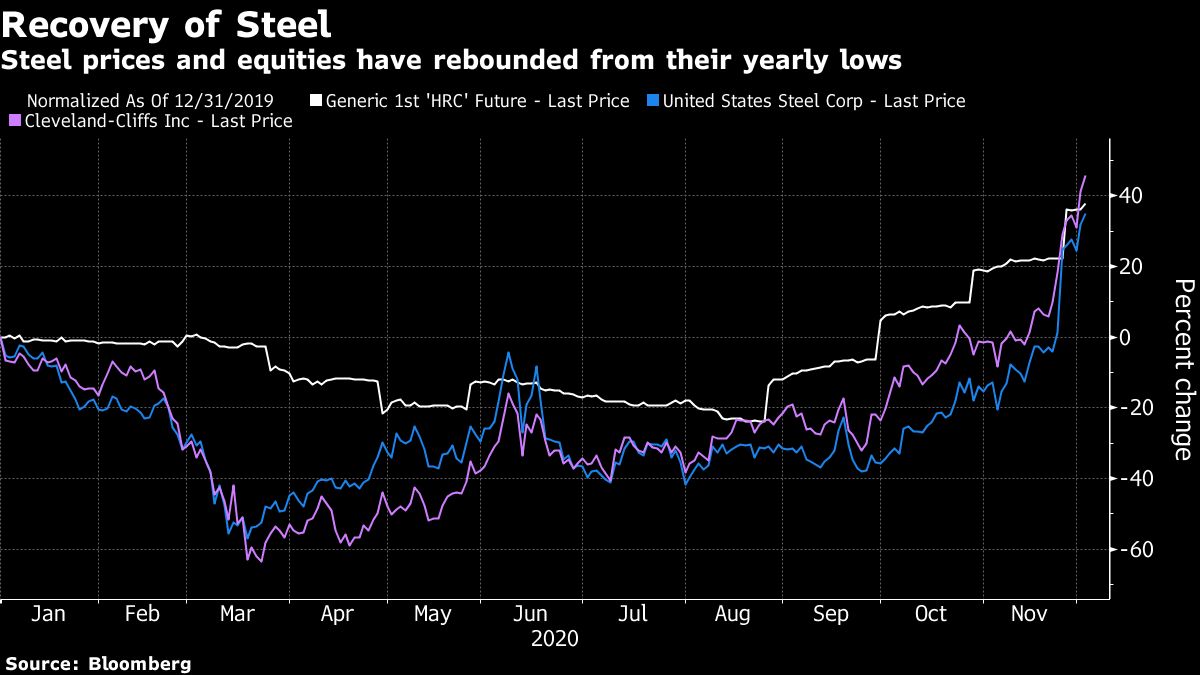 U.S. Steel Corp.’s 47% breakout in November, driven by supply shortages, caught plenty of bears by surprise and signaled a potential shift in investor sentiment for the beaten-down metals sector.

Steel took a hit earlier in the year along with most other commodities on concern that record-setting demand destruction was occurring due to the pandemic and that there’d be a supply glut.

Instead, fortunes have suddenly reversed with progress on the vaccine front, limited supplies pushing up prices, a possible infrastructure stimulus package next year from the Biden administration and the broader rally in the stock market, especially in low-priced value stocks.

Hot-rolled-coil steel futures hit a yearly low of $447 per ton on Aug. 20. The benchmark steel price has since risen more than 80%, boosting equities such as U.S. Steel and Cleveland-Cliffs Inc.

“The surge in hot-rolled coil has been functional around strong recovery in automotive and restocking across the supply chain,” Curt Woodworth, an analyst at Credit Suisse, said in an email. “Blast furnace production remains below the previous peak as many blast furnaces are still down.”

U.S. Steel said on Dec. 1 that it will restart blast furnace No. 4 in Gary, Indiana, more than eight months after the company idled it as the pandemic spread.

The fundamentals of the sector are so positive that one long-term bear on the sector, Gordon Johnson of GJL Research, upgraded U.S. Steel and Cleveland Cliffs on Nov. 24, saying “the steel market hasn’t been this tight since the beginning of 2016/2008.” He pointed out that the recent rise in steel prices is “actually less of a bubble” than it was in prior years.

The spike in prices will lead to an inventory restocking and customers buying more steel in 2021, according to Johnson. “We feel these stocks have a lot of room to run,” he said.

To be sure, more domestic supply is set to come back online during the first half of 2021, which could take some wind out of the rally’s sails, Philip Gibbs, an analyst at KeyBanc Capital Markets, said in a phone interview.

“It’s not going to last much past late-first quarter, but it certainly is something that no one was anticipating a few months ago, and it’s something that helps drive cash flow for the integrated mills allowing them to reduce leverage on the balance sheet,” he said.