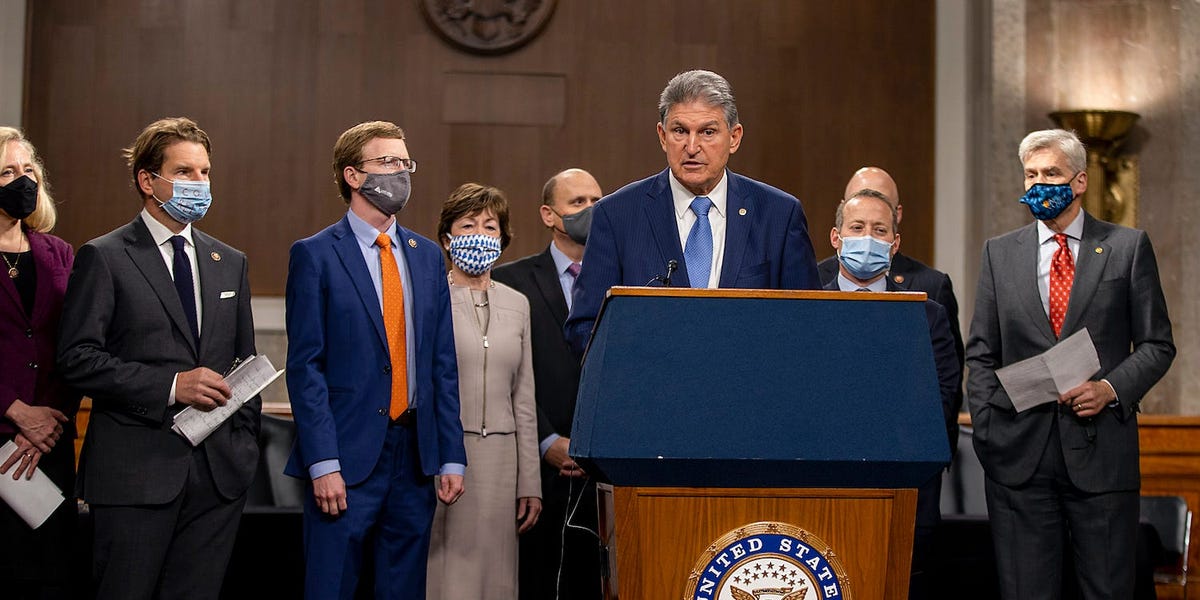 Sixteen lawmakers from both parties are taking the gridlock over a coronavirus stimulus into their own hands.

They unveiled a $908 billion stimulus deal on Tuesday that they hope can get passed before Congress leaves for its winter break, and can provide relief until April 1 even as the pandemic shows no sign of slowing.

Sen. Joe Manchin, a Democrat of West Virginia, told Insider that the group had worked "around the clock" to come to a bipartisan deal over the course of the last three weeks.

The lawmakers who came up with the deal — most of whom have a history of working across the aisle — included GOP Sens. Susan Collins of Maine, Mitt Romney of Utah, and Lisa Murkowski of Alaska, New Hampshire Democratic Sens. Jeanne Shaheen and Maggie Hassan, as well as several House members.

The latest deal-making is a departure from earlier actions on a stimulus in Congress and an indication many lawmakers have lost confidence in the protracted negotiations between leadership and the Trump administration. By Wednesday, the bipartisan deal got a major boost as House Speaker Nancy Pelosi and Senate Minority Leader Chuck Schumer announced they'd back the bill, putting Senate Majority Leader Mitch McConnell on the spot.

Previously, individual members introduced relief bills but otherwise stood on the sidelines while Pelosi and Treasury Secretary Steven Mnuchin tried to arrive at a compromise. Senate Republicans had in recent months largely avoided the negotiations with the White House even as McConnell continued to push for a $500 billion package.

The Democratic-controlled House in October passed a $2.2 trillion measure that McConnell ignored. He instead brought a $500 billion measure to the Senate floor that Democrats and Republican Sen. Rand Paul of Kentucky blocked. Congress hasn't sent a stimulus to President Donald Trump since May.

In the meantime, the coronavirus has killed more than 260,000 people in the US, and Congress is scheduled to leave Washington soon for the winter holidays.

A stimulus isn't the only thing on the agenda before the end of the year. Lawmakers must pass a spending bill to fund the government by December 11 or risk a shutdown. It's possible that some stimulus measures could make it into the spending bill, McConnell told reporters on Tuesday.

Sen. Mark Warner, a Virginia Democrat who helped with the bipartisan deal, characterized the latest relief package as a "bridge" until Congress can provide even more help. He said it would be "stupidity on steroids" for Congress to leave for the winter break without passing a stimulus.

But the deal is futile unless Senate leaders and the White House get on board with it. Manchin told reporters on Wednesday that Republicans were speaking with McConnell, who has been circulating a narrower stimulus that he said the White House could support.

Six House members are leading the push in the lower chamber, including the Problem Solvers Caucus co-chairs, Democratic Rep. Josh Gottheimer of New Jersey, and GOP Rep. Tom Reed of New Jersey. The caucus introduced a $1.5 trillion bipartisan deal ahead of the election but it didn't gain traction.

"We can't go home until we get this done," GOP Rep. Fed Upton of Michigan, who helped with the latest agreement, told Insider. "Otherwise with a new Congress and a new administration we're talking mid-February at best. That's three months. We can't do that."

The text of the bill isn't out yet, but the members provided details at a Tuesday news conference.

Here is what you need to know about what they agreed to:

A twist on liability protections

One of the biggest issues Democrats have had with the Republican approach has been McConnell's push for a stimulus to include liability protections for businesses, schools, and hospitals. That way, he said, they won't face what he has called "frivolous" lawsuits from workers and customers who claim that a place of business was the source of their infection.

McConnell wanted the liability protections to be retroactive from December 1, 2019, and last until October 1, 2024. That goes back to before the US government was aware of coronavirus infections within the country.

The bipartisan legislation unveiled Tuesday would provide businesses with federal shields from lawsuits in the short term and then allow states time to come up with their own liability protections. Many states have already implemented such protections.

$160 billion for state and local governments

Funding for states and local governments has been another major point of contention that's kept Republicans and Democrats from reaching a deal.

The latest deal would give $160 billion to states and local governments to help them avoid laying off teachers, firefighters, police officers, and other government workers.

Upton told Insider that the language of the measure — when it's introduced as a bill — would likely stipulate that the funding had to be used for coronavirus-related expenses and shortfalls, such as a loss of revenue from the sales tax or gas tax. It would probably preclude the money from going to help struggling pensions. Republicans blame these pension gaps on Democrats' fiscal mismanagement.

The amount in the bipartisan deal is far less than what Democratic leaders wanted. The last bill they passed, called the $2.2 trillion HEROES 2 Act, would have provided $238 billion to states and the District of Columbia and $179 billion for local governments.

$300 a week boost in unemployment insurance

The bipartisan measure would give people who are unemployed an extra $300 a week for 18 weeks on top of their unemployment payments.

The CARES Act from March temporarily added a $600 weekly increase to state unemployment payouts, which expired at the end of July. Some people continued to receive a $300-a-week payment boost through an executive order Trump signed in August, but the money ran out.

Democrats wanted to extend the $600 weekly benefit through January, while Republicans preferred the $300-a-week boost.

The bipartisan measure would revive the Paycheck Protection Program, a fund that lets small businesses borrow forgivable loans as long as they pay their workers. Congress already allocated $670 billion to the PPP but the program expired in August.

$16 billion for a vaccine rollout

The bipartisan deal would provide $16 billion for coronavirus testing and contact tracing — far short of the $75 billion Democrats want — but in line with the Republican demand. The money would also go toward helping with a vaccine rollout.

Hospitals, doctors, and clinics would get $35 billion to help them with the costs of fighting the virus and provide relief from their financial losses.

The bipartisan measure would give schools and colleges $82 billion to help them reopen safely by paying for protective equipment, plastic barriers, ventilation, or additional construction. The money could also be used to provide computers to students for virtual learning.

Manchin confirmed to Insider that schools could qualify for the money even if they have to operate virtually. Previously, Republicans wanted most of the funding to go to in-person learning.

"We don't have the language saying there are certain hoops you have to jump through," Manchin said. "Schools should be safe."

The legislation would also provide another $10 billion for childcare.

House Democrats wanted $182 billion to help schools with the costs of running during the pandemic, including for setting up remote learning, while Republicans wanted $100 billion.

The bill would set aside $4 billion to let borrowers suspend federal student-loan payments until April 1.

The legislation would provide $5 billion to treat opioid addiction. Overdoses are on the rise during the pandemic, according to the American Medical Association, the nation's largest doctor group.

It also provides $45 billion for transportation that hadn't been settled on before, which would go to buses, subways, Amtrak, and airlines. Romney told reporters that the lawmakers arrived at that amount after taking advice from Mnuchin on what would be needed for airlines and buses for public transit.

The popular provision to once again send $1,200 checks to nearly every American is omitted from the legislation.

The stimulus from March included the checks, which gave $1,200 relief payments to single tax filers, with $2,400 for couples filing jointly. Families received an additional $500 for each child.

Democrats and Trump have pushed for a reprisal of the popular program.