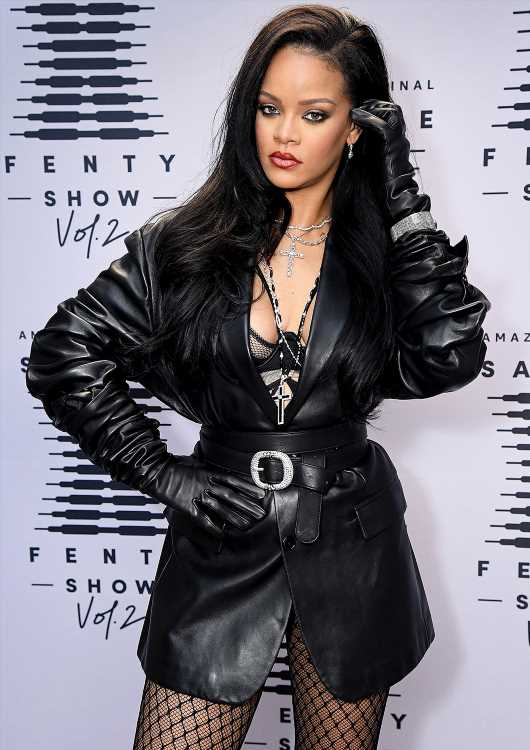 Barack Obama is a member of Rihanna's Navy fanbase!

The former president, 59, appeared on The Tonight Show Starring Jimmy Fallon Friday and reminisced with host Jimmy Fallon about their "Slow Jam the News" segment during his last visit to the late-night show in 2016.

Fallon shared that he had asked the politician to “stiffly” sing the words to Rihanna’s hit, “Work,” but Obama had suggested he sing it looser, the way it’s meant to be sung.

“I was telling you no, no, no — you’re this close to leaving the White House,” Fallon recalled, laughing. “Do not do that now.”

“Are you saying that that would have affected my legacy?” Obama teased in response. “Because that is a jam, and I know that jam well, so I'm a little insulted that you didn't think I could pull it off.” Fallon also brought up Obama’s recent comments about giving Drake his “stamp of approval” to play him in a biopic, asking about what tips he would give the rapper for portraying him.

“Apparently, based on all the people who do imitations of me, the key is to talk really slowly,” Obama joked, slowing down his speech accordingly.

Obama addressed Drake’s interest in playing him during a recent interview on Complex's 360 With Speedy Morman, telling Morman, “I will say this, Drake seems to be able to do anything he wants. I mean, that is a talented, talented brother. So, if the time comes and he's ready…” When Morman asked if the Canadian artist has his “stamp of approval,” Obama, 59, referenced his two daughters, 22-year-old Malia and 19-year-old Sasha.

“Drake has, more importantly, I think, my household’s stamp of approval,” said Obama, who recently released his latest memoir, A Promised Land. “I suspect Malia and Sasha would be just fine with it.”

Drake, who began his career acting on Canadian teen drama Degrassi, first expressed an interest in playing Obama in an interview with Paper in 2010.

“I hope somebody makes a movie about Obama’s life soon because I could play him,” he said during Obama’s first term in office. “I watch all the addresses. Anytime I see him on TV, I don’t change the channel, I definitely pay attention and listen to the inflections of his voice.”Drake continued, “If you ask anyone who knows me, I’m pretty good at impressions. Slowly but surely, I’m not in the study mode because nobody’s called me about anything, but I just pay attention so when the day comes I’m not scrambling to learn how to speak like him.”

Elsewhere in the Tonight Show interview, Obama spoke about his love of music and his famed playlists. “I don't come from a musical family, but I think partly because I had such a strange childhood — mom from Kansas, dad from Kenya, in Hawaii and lives in Indonesia for a while — but it also meant that I was moving around a lot. I was an only child until I was 9 so I think music is one of those things that keeps you company and it becomes a way for you to connect with other people and kids your age,” he said.

“I still remember the first two albums I ever bought with my own money: Stevie Wonder's Talking Book and Elton John's Goodbye Yellow Brick Road. Pretty good choices, I have to say. From that time forward, music was just always something I cared deeply about. Michelle and I used music as a way of reminding people of the magic of America is we have all these traditions that we draw from that all get jumbled up,” Obama continued.

The father of two later added that like most young people these days, his daughter Sasha has an array of music genres in her playlists. “Sometimes Sasha, she's got 2 Chainz on, and then the next thing you know she's got an Elvis song on then suddenly it's Drake and next thing you know it's some Rachmaninoff. Like what are you doing? But to them it all makes sense and it's an indicator of how their hearts and minds are more embracing of differences and see the good in so many people,” he shared.