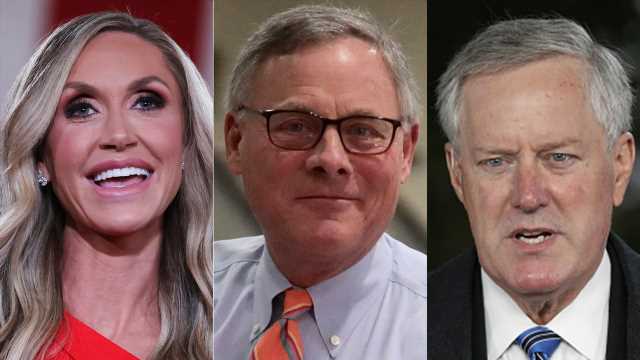 "I could think of nothing greater than to represent the people of my home state, represent North Carolina," she said on Outloud with Gianno Caldwell.

Lara Trump, who is married to Eric Trump, noted that President Trump tasked her with helping him win North Carolina in both the 2016 and 2020 elections.

"I started Women for Trump. We had a bus tour that not only went through North Carolina but all over the country," she said. "I spent a lot of time there, which I love doing – any excuse to go back home."

Sources close to Lara Trump previously told Fox News that she is “interested and exploring” a run.

The Senate race in North Carolina is shaping up to be a primary battle in 2022 as Rep. Mark Walker, R-N.C., announced his bid for the open Senate seat earlier this week.

“I’m running for the United States Senate because serving others is my life and I have the experience to fight and win in Washington,” he said in a video announcement.

AFTER HOLDING THE LINE SO FAR IN 2020, SENATE REPUBLICANS FACE ANOTHER CHALLENGING MAP IN 2022

White House Chief of Staff Mark Meadows also was floated as a contender, but he told the News & Observer last month that he has no plans of running for the seat right now.

This year's Senate race in North Carolina between Republican Sen. Thom Tillis and Democratic challenger Cal Cunningham was the most expensive on record as the candidates shelled out nearly $300 million.

Lara Trump, who named her daughter "Carolina" after her home state, isn't officially announcing yet though.

"There are a lot of things to consider. I think people have very clearly seen the way we've been treated as a family since Donald Trump announced that he was running for president, since he became president," she said.

"Our family is under constant scrutiny."