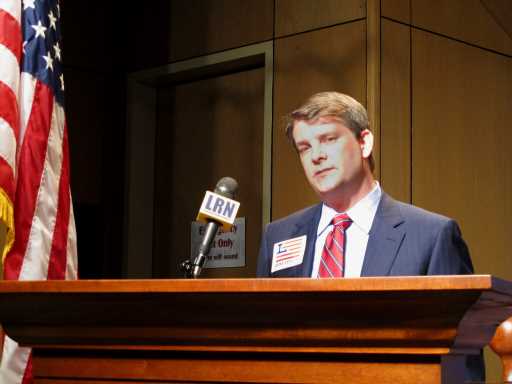 Left-wing Vox writer Aaron Rupar was sharply criticized Tuesday for linking the death of congressman-elect Luke Letlow to his calls to open up the economy.

Letlow, 41, died Tuesday of complications from coronavirus, shortly before he was to take office after winning the race for Lousiana's Fifth Congressional District. Doctors said he suffered a fatal heart attack during an operation.

"Congressman-elect Letlow, 41, just died of Covid. A tragedy," he tweeted. He linked to a video of Letlow saying in October, "So while we’ve been cautious and I think both the state and federal level have taken numerous precautions for COVID-19, we’re now at a place if we do not open our economy we’re in real danger."

Critics slammed Rupar, who is popular with progressives for his vitriolic tweets against Republicans and conservatives, for suggesting Letlow's stance against lockdowns suggested he failed to take the virus seriously. Images have emerged of Letlow at public events, with and without a mask on.

Sen. Ted Cruz, R-Texas, said it was "sad" that Rupar would use the death to "push his political agenda."

"My jaw is dropped at your callous and cruel behavior," Lousiana native and political consultant Ellen Carmichael tweeted. "His death isn't your opportunity to make a point. May more mercy be shown on you than you have shown on the father of two small babies."

Rupar said his reaction was genuine, although he went on to double down on his earlier point that Letlow's death was a result of his politics.

"The smug football-spiking glee over Luke Letlow's death at 41 is one of the most repulsive things I've seen on this site," he tweeted. "Celebrating death is repugnant in all cases but he wasn't a COVID denier. Urging that the costs of isolation & economic ruin be considered isn't denialism."

Jong-Fast replied that, as a 42-year-old, she had posted it out of "fear" given Letlow was only 41 when he died.

Letlow's death brought an outpouring of condolences from both sides of the aisle. He leaves behind a wife, Julia, and two young children.