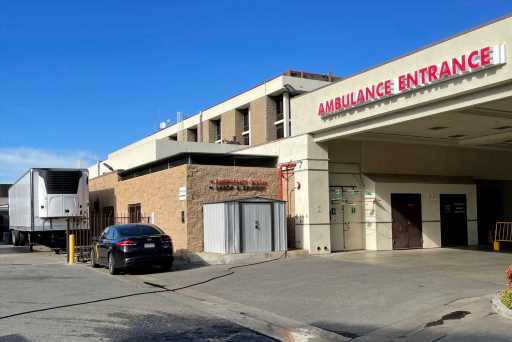 “The rate of new cases this month is translating into a disastrous increase in the number of people with severe COVID-19 symptoms being sent to our local hospitals,” said a statement from the Los Angeles County Public Health Department on Wednesday.

That point was clear in the numbers released by the department. They showed that, for the first time, the number of Covid-19 patients hospitalized in L.A. County crossed 8,000. The total was 8,023. Twenty percent of those hospitalized are in the ICU.

Health officials say hospitals are accepting more patients than they can discharge, and this is “causing a huge strain on the emergency medical system.”

L.A.’s Covid-19 death toll was 258 on Wednesday. That means the 7-day average of daily deaths is about 180. The number is significant because it means the average number of pandemic-related deaths continues to outstrip the daily number of deaths from all other causes which, according to Ferrer, “is about 170.”

The new fatalities raised the countywide death toll from the virus to 11,349.

Statewide, Wednesday’s daily Covid-19 death toll was the second-highest ever, at 459. Mirroring L.A., California also saw the highest number of virus-related hospitalizations ever at 22,820.

And, according to L.A. health officials, a post-Christmas surge in cases, hospitalizations and then deaths still lies ahead. Friday marks two weeks since Christmas. That’s when experts expect to see a new rise in numbers.

Ferrer also confirmed another 11,841 new cases, lifting the total from throughout the pandemic to 853,440.

The current average of people testing positive for the virus in the county is now more than 22%. That means that between 1 in 4 and 1 in 5 of those tested in the region is coming up positive. The cumulative positivity rate from throughout the pandemic is 17%.

“Today I’m more troubled than ever before, and in part, my concern is rooted in the reality that it will take so much more for us to slow the spread, given the high rate of community transmission,” said Ferrer. “During the summer surge, one in 10 people who tested were positive. Today, one in every four or five people getting tested is positive. When so many people are positive, the need for precautions significantly increases.”

“The number of new patients with COVID-19 requiring hospitalization each day in Los Angeles County has increased markedly in the past few weeks, but it’s now appearing to level off somewhat,” she said. “This likely reflects relatively less transmission in a period after Thanksgiving and the first couple of weeks of December.”

But she warned that leveling off is not a cause for celebration, noting that hospitals will soon begin seeing an anticipated swell of patients caused by gatherings over the Christmas and New Year’s holidays.

The California Department of Public Health issued a new public health order Tuesday that requires some non-essential and non-life-threatening surgeries to be delayed in counties that have an ICU capacity of 10% or less and that are located in a region with an overall adjusted 0% capacity. That includes Los Angeles, San Diego, Orange, Riverside, Imperial and San Bernardino counties.

The order will remain in effect for at least three weeks.

“If we continue to see an alarming increase of Covid-19 patient admissions at hospitals statewide, some facilities may not be able to provide the critical and necessary care Californians need, whether those patients have Covid-19 or another medical condition,” said Dr. Tomas J. Aragon, state public health officer. “This order helps ensure that patients continue to receive appropriate medical services by better distributing available resources across the state to prevent overwhelming specific hospitals, counties and regions.”

The order also requires hospitals to accept patient transfers from medical centers that have become so overwhelmed with patients that they enact crisis care standards. As of Wednesday morning, there were no hospitals in Los Angeles County that have made such a declaration.

“Hospitals continue to be inundated with COVID patients,” said Ghaly. “While the numbers are plateauing somewhat, they’re doing so at a rate that is well above a point of comfort for all hospitals, particularly when we’re facing another potential surge in the next couple of weeks.”