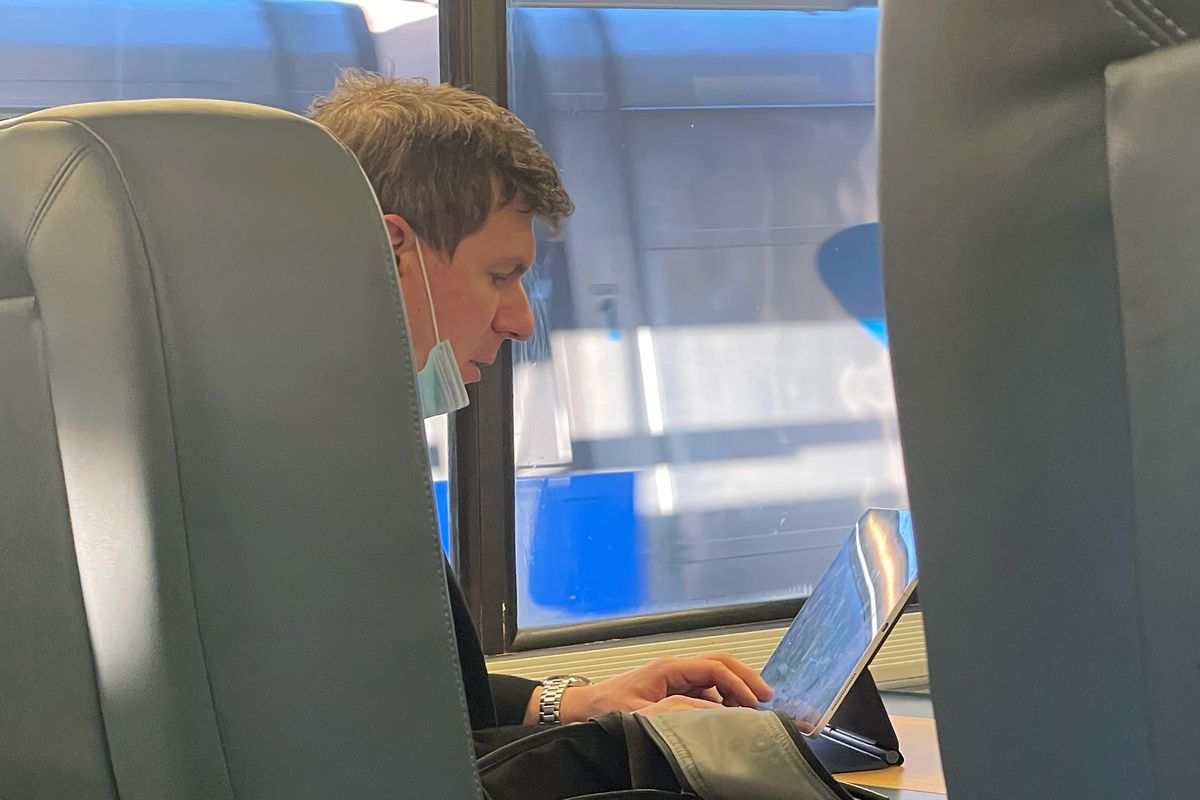 James O’Keefe is the face and chief executive officer of the activist organization known as Project Veritas. He specializes in undercover audio recordings or videos that seek to reveal supposed dishonesty or corruption, usually by Democrats or organizations perceived to be liberal. His critics say his methods are deceitful and that his group peddles disinformation.

But on Thursday, O’Keefe, in a Navy blue suit and no tie, looked like any other businessman riding the Amtrak Acela train from Washington to New York.

During the three-hour ride, he took phone calls, corresponded with associates on WhatsApp on his iPad, read the Drudge Report, perused comments on Project Veritas’s YouTube videos and sent a tweet to his more than 1 million followers implying that the left-wing group Antifa was actually behind the intrusion at the Capitol building the day before. O’Keefe also appeared to discuss upcoming Project Veritas plans and bemoaned that its headquarters had been shut down multiple times due to Covid-19.

O’Keefe made no effort to keep his voice down or hide what he was doing, even though the train car was about a third full of passengers, including a Bloomberg News reporter. He wore a mask around his chin and then took it off entirely, despite Amtrak rules requiring one, and continued to defy the rule even after an Amtrak employee and another passenger asked him to put one on.

He was departing from Washington the morning after a pro-Trump mob violently attacked the U.S Capitol, having been egged on by President Donald Trump. O’Keefe posted a photo of himself on social media marching near the Washington Monument on Wednesday and also tweeted, “I am in DC today meeting with many like you,” encouraging federal government employees to reach out to him.

For months, Project Veritas has been attempting to spread disinformation about voter fraud, according to critics. At the end of September, unsubstantiated claims by O’Keefe’s organization about “ballot harvesting” in Minnesota were shared by both the president and his son, Donald Trump Jr., on Twitter.

In November, Project Veritas published a video in which a U.S. Postal Service worker, Richard Hopkins, claimed a supervisor tampered with mail-in ballots. Hopkins recanted his testimony and told federal investigators that Project Veritas wrote an affidavit bearing his name that was cited by Republicans as evidence of election fraud, according to the Washington Post. Nevertheless, Trump promoted Hopkins’s fraudulent claim in a tweet, who he described as a “brave patriot” in a retweet of O’Keefe.

Project Veritas has also targeted the U.S. Senate races in Georgia, where Democrat Jon Ossoff’s aides complained in October that the group was using deceitful tactics in an attempt to infiltrate the campaign, according to the Atlanta Journal-Constitution.

On the train ride, O’Keefe appeared frustrated that the group’s recent efforts haven’t been more successful.

“We need to roll up our sleeves,” he said, to an unknown caller. “It has been a very quiet month for us.”

O’Keefe took phone calls in which he appeared to strategize about what Project Veritas would do next in Georgia, even after both Democratic challengers, Ossoff and Raphael Warnock, were declared winners.

“What else do we have from Georgia?” O’Keefe asked. “Is there anything we can do in Georgia at this time?”

O’Keefe said that he had an upcoming FaceTime call with an ABC producer, who he was planning to “blow the whistle on.”

When a fan of Project Veritas approached O’Keefe, he reached out his hand. But the woman, who was wearing a mask, recoiled and said, “Coronavirus.” In their conversation, O’Keefe appeared to acknowledge that the mob violence on Jan. 6 didn’t serve his cause.

“It was a tough time but the thing about it is in time of crisis people tend to step up,” O’Keefe told the fan. “Keep sharing.”

O’Keefe devoted a chunk of the ride on phone calls discussing problems with employees getting Covid-19, complaining that this was shutting down Project Veritas’s headquarters and complicating its work.

“It seems like every time a new person gets Covid it shuts down the HQ,” O’Keefe said. “What is the guidance on that? We can’t shut down the company for a month or two. We need to work on Georgia.”

In another phone conversation, he suggested workers who refused to come to the office could be fired.

“I think the message is ‘I understand but we have a right to fire people who won’t come in,’” O’Keefe said. “We’re an essential business.”

Shortly thereafter, he tweeted a link where people could apply to work at Project Veritas.

O’Keefe declined to comment about his conversation upon arrival at Penn Station in New York.

Later, in a statement, he said, “Our sources and our viewers depend on us to show up to work. We are an essential media organization with perhaps the most essential mission in the country right now.”

He added, “Investigative reporting, whistle-blowing and undercover work requires collaboration and in-person work, period. This is something I cannot compromise on.” He said whistle-blowers and insiders have reached out to Project Veritas and that “our staff must be there for them in-person, whatever that takes.”

— With assistance by Daniel Zuidijk