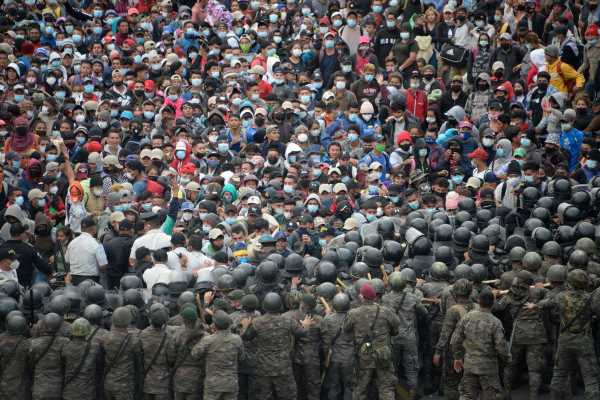 A caravan of some 6,000 migrants continued its trek to the southern border of the U.S. after clashes with military and police on Sunday in Guatemala.

Migrants were greeted with sticks and tear gas in Chiquimula, Guatemala, as they tried to pass through a barrier. Their goal is to make it to the U.S. where many believe the administration of President-elect Joe Biden will soften its treatment of migrants.

“I decided to go the the United States because in my country there is no work, there is nothing,” said Carlos Flores from Honduras, according to daily Milenio. “I have to leave because the pandemic and hurricanes caused destruction in my country.”

Mexico’s Migration Institute INE said that the national guard and the defense ministry were on alert in the southern state of Tabasco, which borders with Guatemala, ahead of the expected arrival of the caravan.

Last year, President Andres Manuel Lopez Obrador promised his U.S. counterpart Donald Trump that he would halt undocumented migrants, deploying a full-scale crackdown at Mexico’s southern border and turning away thousands with the help of the national guard. It’s unclear if Lopez Obrador’s stance on migration will shift when Biden takes office on Wednesday.