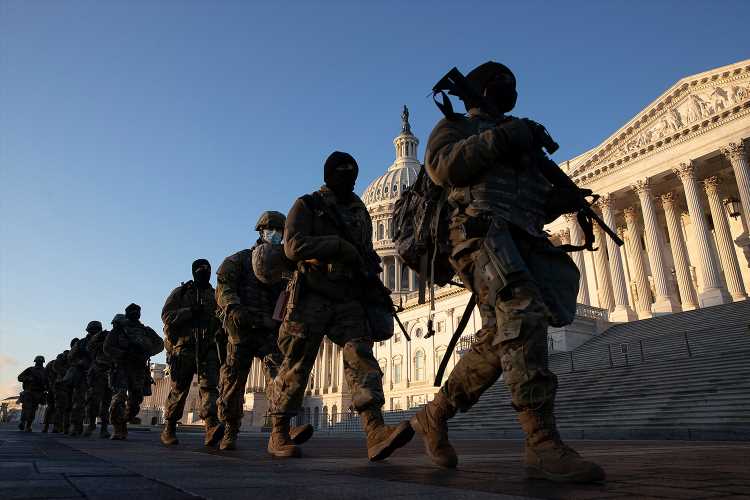 As the House prepares to vote on impeaching President Trump for a second time, members of the National Guard are being deployed to the United States Capitol. Their arrival comes after a deadly riot at the Capitol on Wednesday, Jan. 6, that aimed to stop Congress from certifying Joe Biden’s victory in the 2020 Presidential Election. On Monday, Jan. 11, President Donald Trump declared a state of emergency in the District of Columbia ahead of President-elect Joe Biden’s inauguration on Jan. 20.

Federal assistance was ordered to the District beginning Monday and continuing through Jan. 24, enabling FEMA to “coordinate all disaster relief efforts” with the purpose of “alleviating the hardship and suffering caused by the emergency on the local population” and provide assistance in any emergencies that arise, per the declaration. The National Guard has planned to have up to 15,000 troops deployed to meet current and future requests for the inauguration, Gen. Daniel Hokanson, chief of the National Guard Bureau, told CNN. The Department of Defense announced on Tuesday that the National Guard members who are stationed at the U.S. Capitol as part of the amped up security protocols will be armed, according to The New York Times. Capt. Chelsi Johnson, spokesperson for the D.C. National Guard, told CNN in a statement, “National Guard members are postured to meet the requirements of the supported civil authorities, up to and including protective equipment and being armed if necessary.” The chief of the National Guard Bureau, General Daniel Hokanson, told reporters he expected about 10,000 troops in Washington by Jan. 16 to help provide security, logistics and communications. As the troops are called to the Capitol, many have been quartering inside the building they are assigned to protect. As a result, there have been photos of the National Guard members getting rest on the marble floors of the Capitol. He added via Twitter that the troops “had to stay here overnight because there was nowhere to put all 15,000 troops being brought into DC for inauguration from various state national guards (eg New York sent 1,000).” One group rests in the Capitol while another keeps watch, as is military protocol. In one photo (right), Guard members rest beneath a bust of President George Washington. In another photo, a reporter pointed out on Twitter, they are seen resting beneath a plaque that had been dedicated to the troops who quartered in the Capitol building during the Civil War in 1861.

In 1861, President Abraham Lincoln called for 75,000 volunteers to serve in the Union Army after the Confederate attack on Fort Sumter in South Carolina.