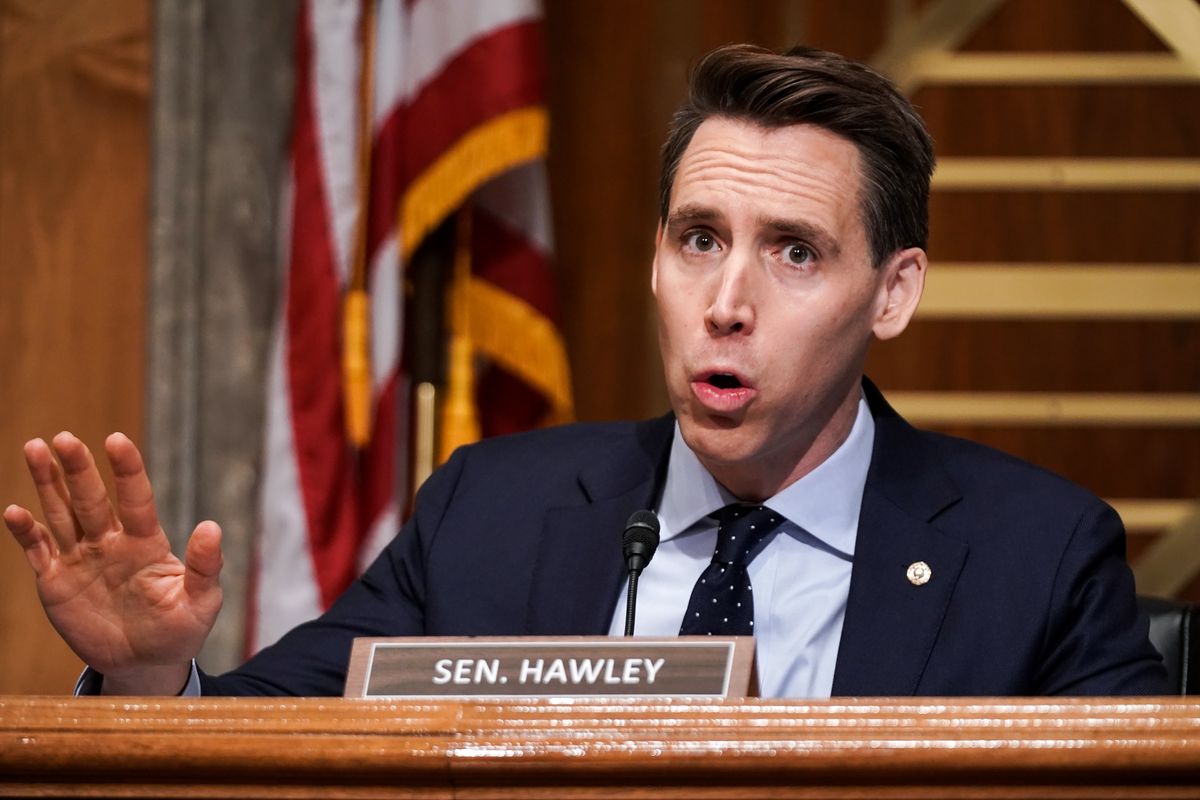 Hawley, along with Senator Ted Cruz of Texas, led the ultimately doomed effort to upend Biden’s electoral wins in key states, and both attempted to raise campaign funds off their efforts.

That push, including an image of Hawley saluting protesters with a fist pump before they stormed the Capitol on Wednesday, triggered criticism from fellow senators, the two largest newspapers in his state, a major donor, and a former Republican senator who aided his rapid political rise.

It also led Simon & Schuster to cancel a contract for Hawley’s upcoming book, “The Tyranny of Big Tech.” The publishing company said it “cannot support Senator Hawley after his role in what became a dangerous threat to our democracy and freedom.”

The onslaught has led to questions about Hawley’s political future, just as the senator, who turned 41 on New Year’s Eve, appears to be positioning himself for a 2024 presidential run in the populist style of Trump.

Asked Friday if Hawley and Cruz should resign, Biden said: “I think they should be just flat beaten the next time they run.”

At least three Democratic senators, Patty Murray of Washington state, Chris Coons of Delaware, and Ron Wyden of Oregon, went further and called on Hawley and Cruz to resign. Regarding Hawley, so did the Kansas City Star and St. Louis Post-Dispatch editorial boards. The latter wrote that his “presidential aspirations have been flushed down the toilet because of his role in instigating Wednesday’s assault on democracy.”

Humphreys said in a statement provided to Bloomberg Government that Hawley’s “anti-democracy populist rhetoric” had provoked violence threatening the Congress.

“Hawley’s irresponsible, inflammatory, and dangerous tactics have incited violence and further discord across America,” Humphreys said. “And he has now revealed himself as a political opportunist willing to subvert the Constitution and the ideals of the nation he swore to uphold.”

Hawley also drew the wrath of John Danforth, 84, who served three terms as a Republican senator from Missouri and helped boost the rise of the ambitious young lawmaker.

“I thought he was special. And I did my best to encourage people to support him both for attorney general and later the U.S. Senate, and it was the biggest mistake I’ve ever made in my life,” the elder statesman told the Kansas City Star.

McConnell convinced most Senate Republicans to reject the effort to block Biden’s Electoral College victory, both before and in the hours after pro-Trump rioters entered the Capitol. The Senate rejected objections to the electoral votes for Arizona and Pennsylvania by votes of 93-6 and 92-7, respectively, though Hawley and Cruz supported both.

Hawley said in a statement reported by Missouri outlets that he’s proud of his actions.

“I will never apologize for giving voice to the millions of Missourians and Americans who have concerns about the integrity of our elections,” he said.

Humphreys also called for Hawley to be censured by the Senate for undermining a peaceful transition of power.

Still, it’s possible neither Hawley nor Cruz will pay much of a political cost, said Doug Heye, a former Republican House aide who also worked in the George W. Bush administration.

“Major donors walking away from a politician is significant,” Heye said. “But the reality is that that’s not how money is raised anymore, and Hawley and Cruz may make a strategic decision that they don’t need them anymore because they can make more at $3, $4, $10 a clip.”

Even a censure by the Senate might not hurt Hawley’s political ambitions, Heye said. “And with Cruz, some of this has been baked in for so long,” he said of the 2016 presidential candidate.

“We’re in a different political environment,” Heye said. “This is part of Trump’s success — he would smash norms.”

Senator Ben Sasse, Republican of Nebraska, sharply criticized Hawley’s actions during an NPR interview Friday, saying he did “something that was really dumb” which helped incite violence at the Capitol.

Earlier, Sasse said via Facebook that the violence was the inevitable outcome of Trump’s addiction to constantly stoking division.

“When we talk in private, I haven’t heard a single congressional Republican allege that the election results were fraudulent — not one,” Sasse said. “Instead I hear them talk about their worries about how they will ‘look’ to President Trump’s more ardent supporters.”

Heye said even Hawley’s book contract debacle, which the Yale-educated constitutional lawyer inaccurately called “a direct assault on the First Amendment” in a tweet, could ultimately help him.

“The reality is he’ll get another publisher,” Heye said. “His book just got more attention.”