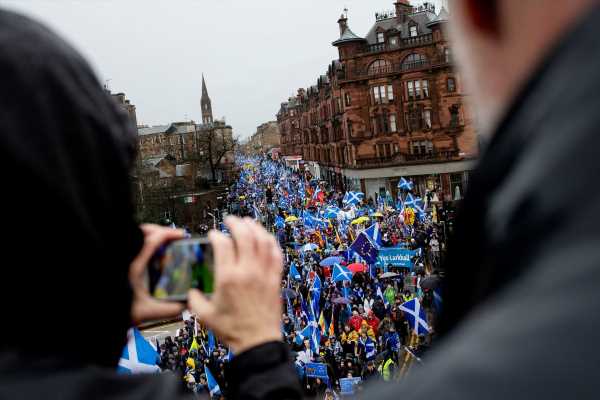 Scottish First Minister Nicola Sturgeon said she remains committed to a legal referendum on independence after her party set out a plan of action should the U.K. government continue to refuse to grant one.

The Scottish National Party leader said that if the party wins May’s regional election in Scotland, the U.K.’s position will be untenable because voters will have demanded the right to make a decision on the country’s future. In an interview with the BBC on Sunday, she said British Prime Minister Boris Johnson was “frightened of democracy.”

The SNP set out a road map this weekend for a referendum after the coronavirus pandemic is over, an escalation of a standoff with the government in London that’s set to weigh on politics in the U.K. following its departure from the European Union. The Scottish government, led by the SNP for 14 years, is opposed to Brexit, and Scotland voted against it in 2016.

The Scottish election — which Sturgeon said she still expects to go ahead as scheduled — is being framed as a vote on the right to another independence referendum and Johnson’s Conservatives are increasingly concerned about how to tackle it. Polls show the SNP is on track to win a majority of seats in the Scottish Parliament, and Sturgeon has pledged to hold a plebiscite in the “early part” of the next parliamentary session.

The SNP’s 11-point plan states that any new vote must be “beyond legal challenge.” But the document leaves open the possibility that the Scottish Parliament could back holding a referendum to force Westminster to then block it in the courts.

Johnson has rebuffed calls for a vote on separation, arguing that a 2014 referendum, in which Scots voted to remain in the U.K. by 55% to 45%, had settled the matter for the foreseeable future. That vote was held after then-Prime Minister David Cameron granted an order that transferred the necessary powers to Edinburgh.

Douglas Ross, leader of the Scottish Conservatives, said now is not the time for a referendum, and the SNP should be focused on improving Scotland’s economy, education and health-care systems.

“People across Scotland want the focus to be on recovery, not referendums,” Ross said on Times Radio on Sunday. “I don’t believe there should be another referendum.”

Opinion polls now consistently show higher support for breaking away from the rest of the U.K. following Brexit. A Panelbase survey published in the Sunday Times shows support for independence leading the union camp by 49% to 44%, with 7% undecided. The survey suggests that the independence movement will benefit if Johnson remains prime minister.

Sturgeon is reticent to move ahead with any vote that wouldn’t hold up to international law. She also faces some other political headwinds, such as ensuring Scotland’s vaccine rollout doesn’t lag behind, getting children back into schools, and a rise in deaths related to drug abuse.

There’s also an ongoing investigation into her government’s handling of a harassment case against her predecessor Alex Salmond that is becoming increasingly acrimonious. Sturgeon will face a committee hearing in the coming weeks. The issue has already proved divisive for her party.

Salmond was cleared by a court in March of sexually assaulting women during his time in office. In her BBC interview, Sturgeon said she didn’t mislead parliament on the harassment claims. “I didn’t collude with Alex Salmond and I didn’t conspire against him,” she said.

In the meantime, the dominant theme in Scotland remains the right to hold a referendum on leaving the three-centuries-old union with England and Wales.

Separately, a judge is considering a crowd-funded case brought by a Scottish independence campaigner to establish whether the parliament in Edinburgh already has the legal means to call a vote without U.K. approval. Judge Ailsa Carmichael said on Friday she will make a “very swift” ruling and will either accept or reject the application — or opt not to offer an opinion.

— With assistance by Joe Mayes