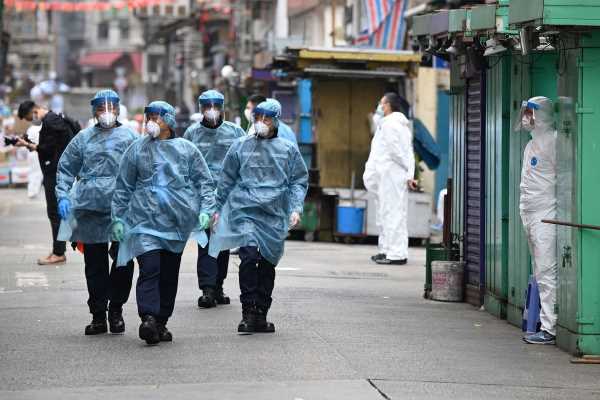 Vaccine coverage won’t reach a point that would stop transmission of the virus in the foreseeable future, the World Health Organization said. United Nations Secretary-General Antonio Guterres said the world is risking more virus variations by not pushing for vaccines in developing nations.

Moderna plans to begin human studies of a booster shot for its vaccine to help protect against a more-transmissible South Africa virus variant. Merck & Co. is abandoning its two experimental vaccines. South Korea reported 354 new cases over the last 24 hours, a decrease from 437 the previous day.

According to a Bloomberg ranking, New Zealand holds onto pole position for the third month running as the best place to ride out the pandemic, while Mexico remains last of the ranked economies.

Subscribe to a daily update on the virus from Bloomberg’s Prognosis team here. Click CVID on the terminal for global data on cases and deaths.

South Korea reported 354 new coronavirus cases over the last 24 hours vs. 437 the previous day, according to data from the Korea Disease Control and Prevention Agency’s website. Total deaths rose by 11 to 1,371.

Hong Kong Chief Executive Carrie Lam has asked the Chinese government to supply Sinopharm’s vaccine to the city as there may be a delay in the other vaccines it procured, Sing Tao reports, citing unidentified people.

The current vaccine approval mechanism in Hong Kong would take into account the fact that the Sinopharm vaccine has been approved by China’s National Health Commission and is widely used on the mainland, even though clinical data hasn’t been published in international journals.

U.S. hospitalizations for the coronavirus tumbled to the lowest since mid-December, new data from the Department of Health and Human Services show. There were 114,281 Covid-19 patients in hospitals across the country as of Monday — a 13% decline from 131,637 on Jan. 15.

U.S. President Joe Biden says he anticipates that coronavirus vaccines will be available to anyone in the nation by spring — a target requiring an increases in the current pace of inoculations.

The U.S. is currently administering about 1.2 million shots per day, data compiled by Bloomberg show, and Biden said Monday he expects that will soon reach 1.5 million doses. He said the administration has “commitments from some of the producers that they will in fact produce more vaccine,” though didn’t say which companies.

The first case of Covid-19 caused by an emerging Brazilian variant of the virus has been identified in the U.S., in a Minnesota resident who recently returned from a trip to Brazil.

Public health officials have been monitoring for infections caused by mutations now taking hold in South Africa and Brazil, as well as the more-established variant that’s responsible for most cases of the disease in the U.K. The mutant forms of the virus can be more easily transmitted. Eight Minnesota residents have been infected with the U.K. variant.

California, which trails other states in distributing the vaccine, is creating a new procedure. The state will allow residents to be notified when they are eligible for inoculation and to schedule appointments, Governor Gavin Newsom said Monday.

The state will continue to focus on distributing the vaccine to residents over 65, health-care staff and other essential workers, and from there will transition to age-based availability. California has already tripled the number of vaccines it administers to about 120,000 per weekday, Newsom said.

Harris County, Texas, is abandoning its first-come, first-served online vaccine sign-ups effective Tuesday in favor of a new system that will evaluate recipients according to age, medical history and other factors.

The third-largest U.S. county plans to launch a “smart wait list” that will be accessible through a web link or via phone, according to an announcement on Monday. About 27,000 people have received vaccinations from county health officials, whose territory includes Houston.

Groups of rioters confronted police for a third consecutive evening in Dutch cities including Amsterdam, Rotterdam and Zwolle in incidents that started Saturday when a curfew began.

Dutch Prime Minister Mark Rutte earlier on Monday condemned the unrest, labeling it “criminal violence.” The curfew runs between 9 p.m. and 4:30 a.m. in coming weeks and is on top of existing lockdown measures in place until at least Feb. 9.

“If we believe it’s possible to vaccinate the Global North and forget about the Global South, if we let the virus spread like wildfire in the Global South, it will mutate,” Guterres told the Davos Agenda event on Monday. “And when it mutates, it will come back in a way that vaccines will no longer be relevant.”

Guterres said that many developed countries have bought more vaccines than they need and should put “those that will not be necessary at the disposal of developing countries.” He added that licensing should be made available for developing countries like Brazil and India, which have a “huge capacity of generics,” in order to scale up production of vaccines.

New York is in a better place after the post-holiday spike in Covid-19 and can begin to loosen restrictions and increase economic activity, Governor Andrew Cuomo said.

Elective surgeries can resume in Erie County, Cuomo said, and more adjustments will be made over the next couple of days.

Ireland is seeing “continued rapid improvement” in the incidence of the coronavirus, a top government adviser said, as the nation reported a further drop in new cases.

There were 1,372 more confirmed cases, the lowest level since Dec. 28, with seven deaths. While Ireland has been dealing with one of the worst outbreaks in the world in recent weeks, hospitalizations are now plateauing and may be starting to fall, Philip Nolan told reporters in Dublin.

Despite the improvement in numbers, the government is likely to keep the country in lockdown until Early March, the Irish Examiner reported.

France will miss its economic growth target this year if another nationwide lockdown is imposed to contain the spread of the coronavirus, Finance Minister Bruno Le Maire said Monday in an interview with Bloomberg Television.

“If there is a decision of lockdown in France, of course it will have a direct impact on growth forecasts and it will be very difficult to meet 6% growth,” Le Maire said.

Vaccine coverage won’t reach a point that would stop transmission in the foreseeable future, according to Mike Ryan, head of the World Health Organization’s emergencies program. Looking at eradication of the virus as the measure of success will mean the world is going to struggle, he added.

“The bar for success is reducing the capacity of this virus to kill, to put people in hospital, to destroy our economic and social lives,” he said. He said there’s not enough vaccines right now to even serve those who are most at risk.

Separately, WHO officials said the recommended intervals between the first and second shots should be respected.

California, a recent epicenter of the coronavirus pandemic, has lifted its regional stay-at-home orders as the outbreak slows across the state and hospitalizations ease.

Four-week projections for intensive-care capacity are above 15%, according to a statement Monday by the California Department of Public Health. That’s the threshold that allows regions to exit stay-at-home orders. The San Joaquin Valley, San Francisco Bay Area and Southern California had been under the restrictions.

The most-populous state will return to its four-tiered reopening system for counties, with most areas remaining in the purple tier with the tightest restrictions. Still, lifting the stay-home rules will allow businesses such as outdoor dining to resume.

Italy registered 8,562 new virus cases on Monday, the lowest daily increase since Oct. 14, from 11,629 the day before. The country reported 420 deaths, from 299 on Sunday; positivity rate rose to 6% from 5.3%.
Italy reported a first case of the new Brazilian virus strain in Varese, Northern Italy, on Monday, according to Ansa newswire.

The U.K. reported the lowest number of new cases since the middle of December on Monday, as the Prime Minister Boris Johnson said his government would start considering which measures could be relaxed from the beginning of next month.

The further 22,195 new cases come amid a series of positive data points for the country that’s been among the worst-hit in the world. The average number of new cases has been falling consistently since the beginning of January. Last week the ‘R value’ indicated the virus was no longer spreading exponentially, and the number of people in hospitals is slowly falling.

Those indicators hint at an impending peak in the number of deaths being reported each day, which last week hit a record of 1,820. There are still thousands of people on mechanical ventilation, and hospitals are still under significant strain.

Moderna plans to begin human studies of a booster shot for its vaccine to help protect against a more-transmissible South Africa virus variant, after a test showed it may be less potent against that strain.

Even with the lower antibody levels, the existing vaccine should offer protect against the South Africa strain, Moderna said. But study results may indicate that immunity will wane faster, the company said.

Trial results from Merck’s V590 and V591 were “disappointing, and a bit of a surprise,” said Nick Kartsonis, senior vice president of clinical research for infectious diseases and vaccine.

Both shots generated fewer neutralizing antibodies to halt infection than other Covid-19 vaccines, and produced inferior immune responses compared with people who had naturally contracted the coronavirus. Neither of Merck’s candidates were ultimately among the six primary vaccines in the U.S. government’s Operation Warp Speed portfolio, though its leadership watched them closely.

— With assistance by Dan Reichl