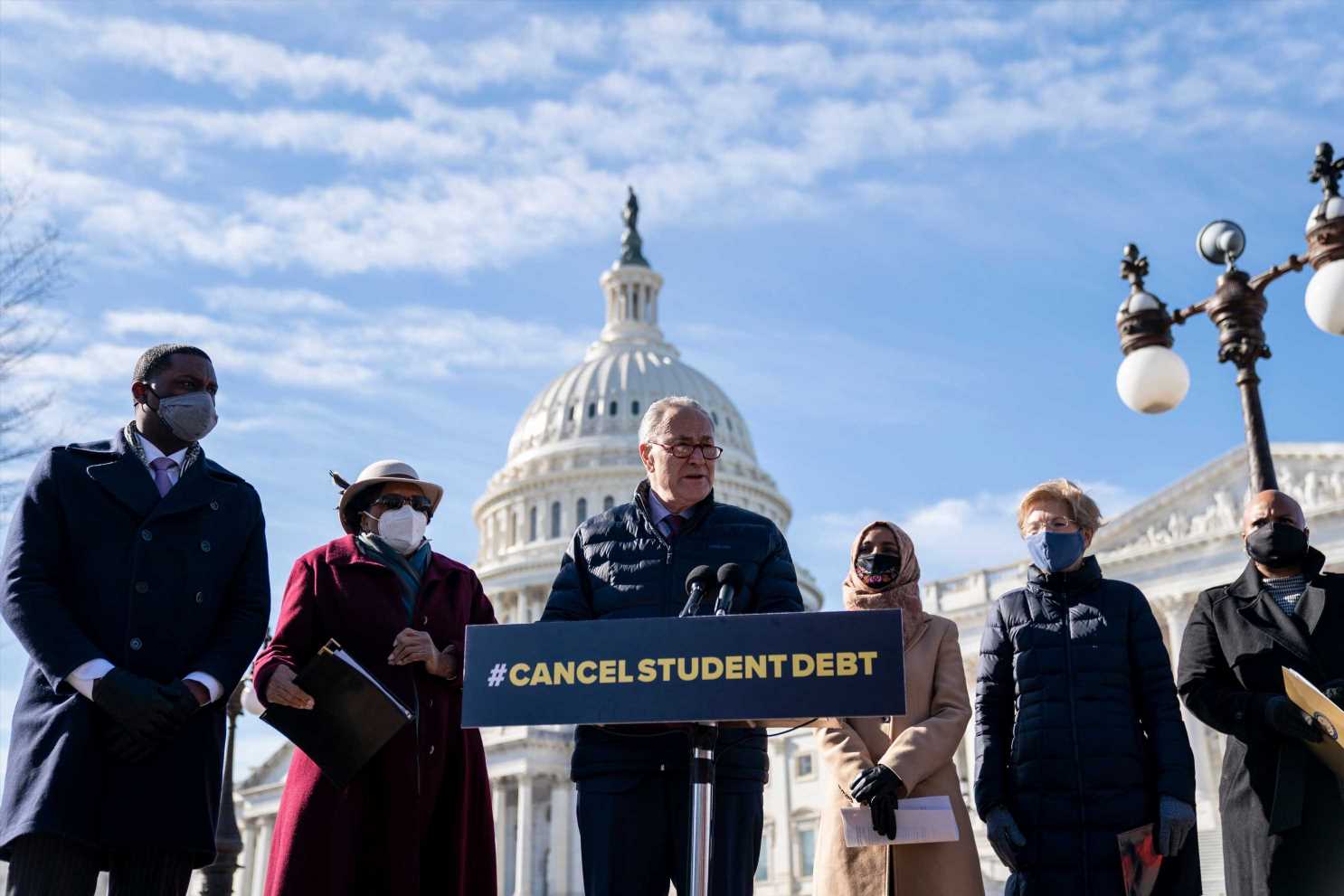 President Joe Biden’s administration is “reviewing” what executive actions he could take to cancel some student loan debt, his press secretary said on Thursday, the first time the White House has indicated that the president could move unilaterally on the issue.

“The President continues to support the cancelling of student debt to bring relief to students and families,” White House press secretary Jen Psaki wrote on Twitter. “Our team is reviewing whether there are any steps he can take through executive action and he would welcome the opportunity to sign a bill sent to him by Congress.”

A Democratic source familiar with the process, speaking on condition of anonymity, said “significant, ongoing” White House review is looking at both the president’s legal authority on the issue and how debt cancellation would influence the economy.

The White House’s review comes amid lobbying from congressional Democrats who are part of a progressive effort to reframe debt cancellation as an all-around economic stimulus rather than a giveaway to the young and wealthy.

“We are pushing the president and his people,” Schumer said at a press conference outside the Capitol building on Thursday morning. “We are not going to let up until we accomplish it.”

Shortly after winning the Democratic nomination last spring, Biden endorsed wiping out $10,000 worth of undergraduate debt per person as a coronavirus relief measure, and eliminating all debt for people who attended public colleges or historically Black colleges and universities and make less than $125,000 per year.

But he had made it clear that he hoped for congressional action on the issue, and was skeptical of claims the administration could unilaterally cancel debt — a power Warren and Schumer have repeatedly insisted Biden has.

“It’s arguable that the president may have the executive power to forgive up to $50,000 in student debt,” Biden told a group of newspaper columnists shortly before Christmas. “Well, I think that’s pretty questionable. I’m unsure of that. I’d be unlikely to do that.”

Biden’s coronavirus relief plan, however, did not include any student debt relief measures and there’s little indication Democrats intend to include it in a relief package they hope to pass later this month. Biden did use his executive authority to extend a coronavirus-related pause on student debt payments until September on his first day in office.

Progressives have been trying to persuade the White House that the president has the power to go much bigger. Schumer said he and Warren discussed the issue with the Biden for 45 minutes last month. Congressional Progressive Caucus Chairwoman Pramila Jayapal told reporters last week that she had discussed the issue with Susan Rice, the chair of the White House Domestic Policy Council.

Progressives working to pressure the Biden administration know they need to convince the White House of both the policy and political case for broad debt cancellation, and have focused on pitching it as a tool to boost the economy and help a wide swath of the American public, not just college-educated 20-somethings.

“This is a major tool to help do all of the things you want to do to help boost your economy,” Rep. Katie Porter (D-Calif.) said in an interview with HuffPost, arguing that canceling debt would increase homeownership, increase small business creation and strengthen family savings accounts. “I think for too long this has been seen as an young people’s issue, or an issue for those who are college-educated. This is part of an overall strategy for economic growth.”

HuffPost readers: Do you have student debt? How does it affect your life? Tell us about it – email kevin.robillard@huffpost.com. Please include your phone number if you’re willing to be interviewed.

At the press conference, the speakers went out of their way to emphasize the wide variety of Americans impacted. Warren noted that 40% of people with student debt lack a four-year college degree, many because they were unable to finish school. Omar noted the fastest-growing group of debtors was over 50 years old.

“Student debt prevents Americans across the country from building and creating wealth that they can pass down to their children and their grandchildren,” Adams said. “This is felt most acutely by Black and brown Americans.”

Americans owe a combined $1.5 trillion worth of student debt, with 45 million borrowers an average of $17,000 in the hole and paying just over $200 a month. These totals have spiked in recent years as states cut spending on public universities and as administrative costs in higher education have grown.

Still, progressives are sticking with one of their core arguments: Canceling student debt would motivate hard-to-reach young voters, who turned out in record numbers to boost Biden in 2020 but whose turnout has historically plummeted in midterm elections.

“Forgiving $50,000 in student loans should be a no-brainer,” said Ben Wessel, the executive director of NextGen America, a Democratic super PAC focused on turning out voters under the age of 40. “The young voters that Biden and the Democrats need to show up in 2022 are members of the most indebted generation ever. Giving them a very tangible economic boost with the stroke of a pen is not only the right thing to do, but good politics if we want to turn out more infrequent voters.”

North Carolina Sen. Richard Burr, the top Republican on the Senate committee that oversees Department of Education, said he would oppose any effort at widespread debt forgiveness, calling it “dangerous and foolhardy” and suggesting it would be illegal.

“I will oppose any effort to simply move debt from borrowers on to taxpayers,” Burr said, instead pitching Cardona on working on bipartisan legislation to make loans easier to pay off.

Warren, meanwhile, quizzed Cardona on how student debt impacts borrowers and asked him to “commit to doing everything you can … to provide borrowers with immediate relief.”

There will be at least one advocate for widespread debt cancellation in his department. On Thursday, it announced that Julie Margetta Morgan, a former Warren staffer who has studied student loan issues for more than a decade, would join the undersecretary’s office as a senior adviser.