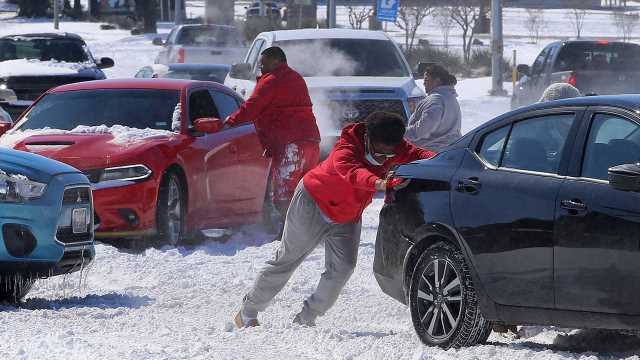 With millions of Texas residents suffering from the effects of a deadly winter storm, President Biden “took the day” off, Sean Hannity charged Thursday.

“Where is our commander-in-chief?” asked the “Hannity” host. “You know, that new guy? Oh, that’s right! This morning, he decided to take a snow day. The guy ultimately in charge of FEMA and all of the country’s emergency resources and federal agences? Yeah, he took a day off in the middle of this natural disaster. Where’s the feigned phony, selective liberal outrage on this?

“To be fair,” Hannity added later, “it’s not even really totally clear that Joe even fully understands what’s going on in Texas.”

The White House announced a so-called “Travel/Photo Lid” at 8 a.m. ET Thursday. Biden did not appear on camera at any point during the day. The administration did release a readout of a phone call between Biden and Texas Gov. Greg Abbott and the president previously approved emergency declarations in Texas, Oklahoma and Louisiana.

Hannity also critized “washed-up actor-singer Bette Midler” for a message on Twitter Tuesday that read in part: “I feel for the people suffering thru [sic] this weather, but #God doesn’t seem to like [Senators] #TedCruz or #JohnCornyn.”

“Pretty disgusting, even by her repulsively lowlife standards that she has,” said Hannity, who also criticized “Meet the Press” moderator Chuck Todd for stating on air that “the only upside” to the bad weather is that “I assume the cold weather motivates people to wear a mask because it’s one extra layer on your face.”

“To Chuck Todd and Bette Midler: Do they know that people died in this storm and Texans are suffering and older people are shivering in their homes?” Hannity asked. “Have they figured that out yet?”