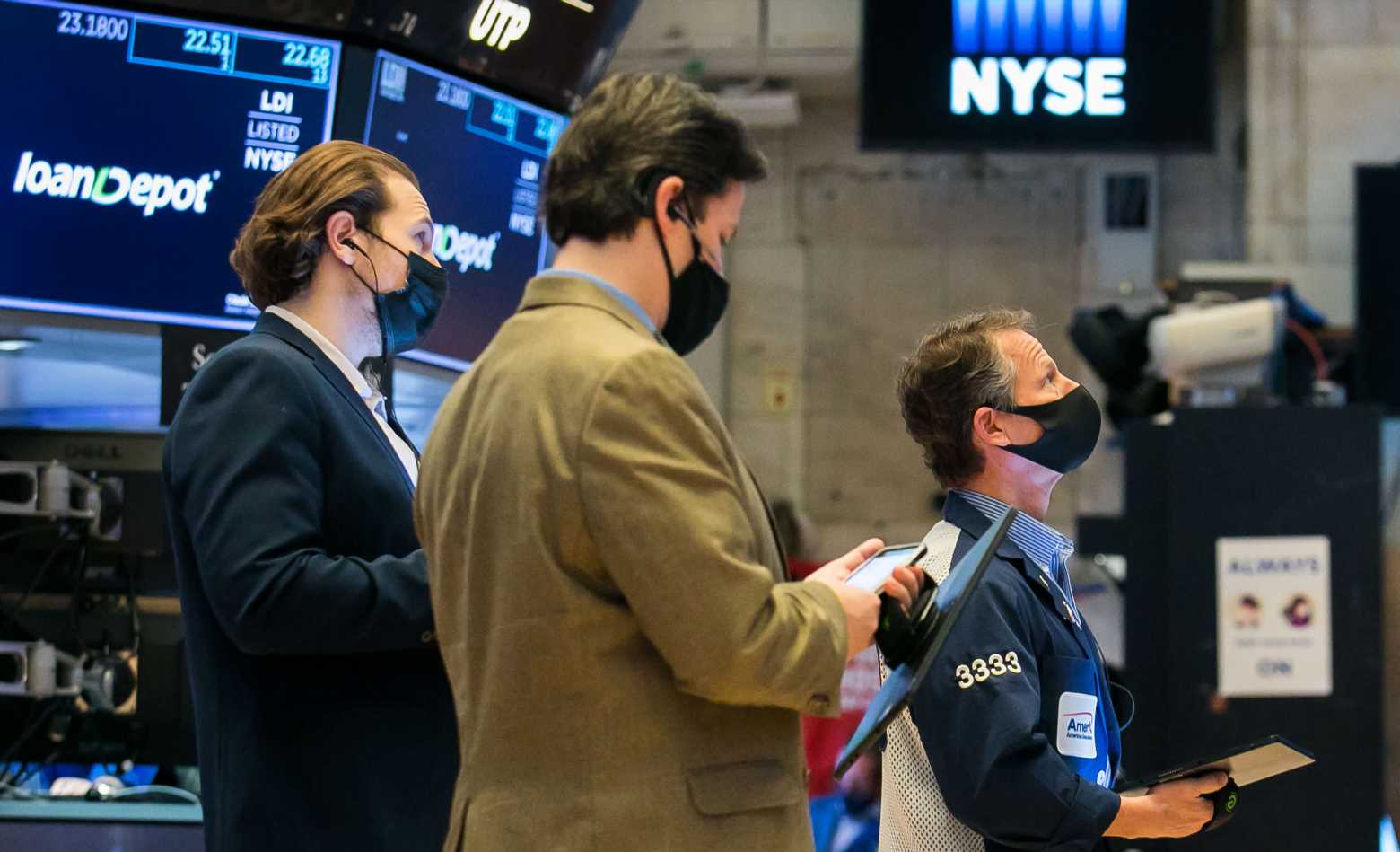 U.S. stock futures were choppy as tech stocks tried to recover from Thursday's rout that dragged the Nasdaq down 3.5% for its worst single-day performance since October. The Dow on Thursday sank 559 points, or 1.8%, from a record closing high the previous session. The Dow had its worst day in nearly a month and so did the S&P 500, which lost almost 2.5%. The culprit behind the selloff was the rapid rise in bond yields. (CNBC)

All three stock benchmarks were tracking for weekly losses. Ahead of the final trading day of February, the Nasdaq was clinging to a gain for the month, which started off strong. The Nasdaq was down nearly 7% from its Feb. 12 record closing high. The Dow and S&P 500 both remain solidly in the green for the month. However, the S&P 500 was off almost 2.7% from its last record closing high, also on Feb. 12. (CNBC)

The 10-year Treasury yield retreated Friday morning, but remained above 1.4%, after surging to 1.6% in the previous session to its highest level since February 2020 and more than 0.5% higher since the end of January. The spike in the 10-year yield, which is used as a benchmark for mortgage rates and auto loans, has been driven by expectations of improving economic conditions as coronavirus vaccines are rolled out, as well as fears of higher inflation. (CNBC)

IN THE NEWS TODAY

Inflation worries are being stoked on the thought that the $1.9 trillion Covid stimulus bill — which is seen passing the House on Friday — on top of accelerating growth could overheat the economy. Democrats on Capitol Hill are trying to push their relief measure, including a federal minimum wage boost to $15 per hour, through without GOP support. (CNBC)

However, a key nonpartisan official, the Senate parliamentarian, ruled Democrats cannot include the minimum wage increase in the bill. The decision means the Senate will likely pass a different version of the bill than the House, and representatives will have to approve the plan a second time. (CNBC)

A key FDA advisory panel is set to vote Friday on whether to recommend approval of Johnson & Johnson's single-shot Covid vaccine for emergency use, which would help pave the way for a third preventive treatment in the U.S. While the full FDA doesn't have to follow the vaccine committee's recommendation, it often does. (CNBC)

DoorDash (DASH) shares sank 10% in Friday's premarket on outlook concerns. Even with that drop, the stock would still be up nearly 50% from its IPO back in December. DoorDash late Thursday reported $970 million in revenue in the fourth quarter, which beat estimates. However, in its first quarterly results since going public, it also reported an adjusted per-share loss of $2.67. (CNBC)

AT&T (T) is spinning off its DirecTV and other pay-TV services into a separate company, with private-equity firm TPG Capital as a 30% owner of the new entity. The deal will provide AT&T with $8 billion in cash, which it will use to pay down debt. The deal values the pay-tv services at a combined $16.25 billion, compared to the $66 billion that AT&T paid for DirecTV alone in 2015. (CNBC)

Beyond Meat (BYND) struck a three-year deal to be the preferred supplier for the McDonald's (MCD) McPlant plant-based burger, and also struck an exclusive supply deal with Taco Bell parent Yum Brands (YUM). The stock reversed earlier declines after Beyond Meat reported a larger than expected quarterly loss. Beyond Meat shares jumped 6.2% in premarket trading. (CNBC)

Salesforce.com (CRM): Salesforce earned $1.04 per share for its latest quarter, beating the consensus estimate of 75 cents a share. Revenue beat forecasts as well, however the business software giant gave a weaker-than-expected full-year profit forecast. Analysts are also expressing concern about the impact of the company's acquisition of messaging platform Slack (WORK). Dow stock Salesforce fell 4.4% in the premarket.

Airbnb (ABNB): Airbnb reported a loss in its first quarter as a public company, but the company did see better than expected revenue as the pandemic prompted consumers to embrace local travel. Shares rose about 1% in the premarket.

DraftKings (DKNG): Shares of the online sports gambling company rose 3.2% in the premarket after DraftKings reported better-than-expected quarterly revenue and raised its full-year revenue forecast. The company said it is seeing a substantial increase in user activation due to marketing expenditures and further legalization of sports gambling.

Cinemark (CNK): The movie theater operator's stock dropped 2.6% in premarket action after it reported a wider-than-expected loss for its latest quarter. Cinemark was impacted by pandemic-related theater closures, although quarterly revenue did top Wall Street forecasts.

Rocket Companies (RKT): The parent of Quicken Loans and other financial service offerings reported quarterly earnings of $1.09 per share, compared to a consensus estimate of 87 cents a share. Revenue also topped forecasts. Rocket completed a year of record mortgage volume, and announced it would pay a special dividend of $1.11 per share. Rocket stock rose 9.1% in premarket trading.

Nikola (NKLA): Nikola shares fell 2.1% in the premarket after the electric vehicle maker said in a Securities and Exchange Commission filing that founder Trevor Milton had made several inaccurate statements about its technology. Nikola had previously denied issuing misleading communications to the public.

WW International (WW): WW earned 18 cents per share for its latest quarter, short of the 32 cents a share consensus estimate. The Weight Watchers parent's revenue beat estimates. WW is seeing strong growth in digital subscriptions but a decline when its virtual workshops are included. Shares sank 9.7% in the premarket.

The cryptocurrency world is abuzz with the promise of digital collectibles of anything from art to sports memorabilia. Mark Cuban and other celebrities are cashing in on the so-called non-fungible tokens craze. The billionaire Dallas Mavericks owner has auctioned digital goods online and owns some himself. (CNBC)