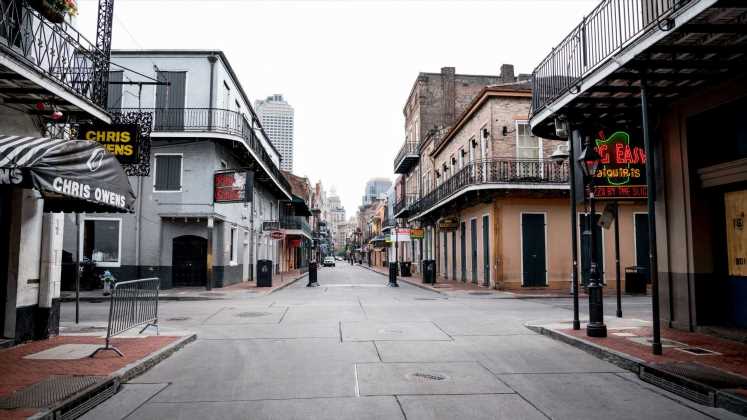 Pointing to the ballooning national debt, GOP lawmakers say the state and local aid provision is an unnecessary part of a “liberal wish list” that would disproportionately benefit blue states that were quicker than red ones to shut down their economies and suffered larger financial loses.

“They want to send wheelbarrows of cash to state and local bureaucrats to bail out mismanagement from before the pandemic,” Senate GOP Leader Mitch McConnell, R-Ky., said Wednesday. “They’re changing the previous bipartisan funding formula in ways that will especially bias the money toward big blue states.”

Democratic lawmakers and a bipartisan coalition of mayors support the funding due to a double whammy saddling states and local government through no fault of their own: declining tax revenues from the economic shutdown and swelling public assistance needs.

“Funding to keep teachers, firefighters, transit workers, first responders in red states and blue on the job – not a liberal wish list. An American wish list,” Senate Majority Leader Chuck Schumer, D-N.Y., said Wednesday. “So many of the people affected by this bill are not liberals or Democrats. They may be Republicans, they may be independents, they may be conservatives. But they’re Americans who want some help to get out of this morass.”

Debate on the American Rescue Plan is expected to begin Thursday in the Senate, but a final vote on the package could take days as Republicans plan to use delays to prevent quick passage.

In a familiar scene during the pandemic lockdowns of 2020 across the U.S., State Street in Madison, Wisconsin, was mostly empty during a spring Wednesday. (Photo: Steve Apps/Wisconsin State Journal via AP)

Democrats are hoping to send the bill, which must go back to the House, to Biden for his signature by mid-March, when federal unemployment benefits expire.

Other parts of the bill have been scaled back (the number of eligible Americans who will get some sort of direct payment) or removed entirely (a rise in the federal hourly minimum wage to $15). But, so far, the state and local aid provision appears likely to be in the final bill expected to pass Congress.

A partisan divide on direct aid to states, cities

Since Congress began sending out money for pandemic aid a year ago, the two sides have been miles apart on how to help states and cities.

Republicans have disagreed with Democrats on how much to spend on reopening schools, helping small businesses or unemployment insurance. But they’ve all agreed those priorities should be funded.

Sending money directly to states and local governments, on the other hand, has been a clearly partisan issue.

Republicans, whose political power comes from rural America, are steadfastly opposed to handing money to cities, where Democrat draw their strength. They view many cities as ineptly – even corruptly – run thanks to what they consider generous employee union contracts and bloated pension plans.

Democrats view cities as vital centers of commerce whose economies power other parts of the states they’re in. House Speaker Nancy Pelosi tried to set aside $1 trillion in pandemic aid for states and local governments last year but the idea died quickly when the GOP-controlled Senate rejected it.

When Democrats regained control of the Senate in January, prospects soared for a massive assistance package for states and cities.

How state and local aid would be allocated

Under the plan, the $350 billion would be divided among several groups:

But their larger beef is that a bill aimed at tackling the coronavirus crisis should not include money for states and localities who they claim are being rewarded for decades of poor stewardship.

“The bill contains a $350 billion bailout for locked-down, poorly managed states with no strings attached,” said Kentucky Rep. James Comer, the top Republican on the House Oversight and Reform Committee. “The sneaky formula used by Democrats ensures that most of the money goes to liberals in California and New York rather than to rural communities.”

Over the past year, Congress has allocated a total of about $360 billion for state and local expenses in the previous four COVID relief bills, according to the Committee for a Responsible Federal Budget. But that assistance was designated for such needs as education, testing, and transportation.

“We have very few places left to cut in our budget if we are to continue to provide them,” Framingham Mayor Yvonne M. Spicer wrote last month to her congressman, Democrat Stephen Lynch. “It is imperative that COVID-19 relief resources come directly to cities and towns to shore up budget shortfalls and position us on the path of economic recovery.”

States and localities have shed 1.3 million jobs since last February compared to the 750,000 lost in the aftermath of the Great Recession more than a decade ago, according to Michael Leachman, vice president for state fiscal policy at the left-leaning Center on Budget and Policy Priorities.

Most states are seeing revenue declines for the first time since the Great Recession though an easing of social distancing measures have made those losses not as large as once feared. But Leachman cautions that while most public sector jobs vanished last spring, states and localities “lost 100,000 employees in just the last four months.”

Not every governor is on board with the plan,

Twenty-one Republicans and one Democrat are taking aim at the state and local funding component, contending the proposed allocation of funds “punishes” states that did not fully lock down businesses amid the pandemic.

The governors, led by South Carolina Gov. Henry McMaster, issued a statement over the weekend critical of what they called a “biased” formula used to decide how much money in direct aid each state receives. One Democrat, Kansas Gov. Laura Kelly, also supported the statement.

Republican lawmakers say there’s plenty of relief Congress approved in previous pandemic aid bills that remains unspent and should be used before considering a future allocation. But advocates say not every locality benefitted from past relief packages.

Onondaga County, New York, which has not received coronavirus relief aid, is dealing with an $84 million budget shortfall in 2021 “while facing millions of dollars in costs related to the pandemic, including the need to fund a distressed hospital,” according to the National Association of Counties.

“These folks are all on the frontlines. They’ve been dealing with this crisis from day one,” Biden said last month when he hosted a bipartisan group of governors and mayors at the White House to push the plan. “They’ve been left on their own, in many cases. (And) I think the federal government has a major role to play here.”