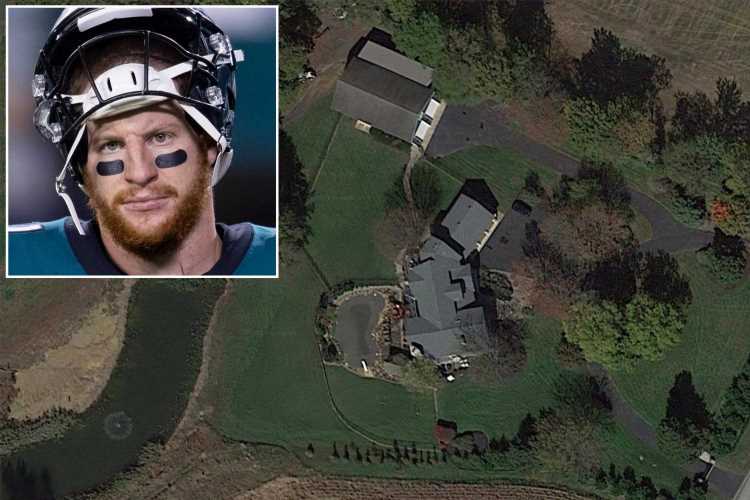 Inside Birdman’s eerie New Orleans mansion he abandoned after Katrina

Why Pamela Anderson is selling her $14.9M Malibu home, moving to Canada

Former Philadelphia Eagles quarterback Carson Wentz and ex-Eagles coach Doug Pederson famously didn’t have much common ground. But they have at least one thing in common: They’re both cutting ties with the Philly area after their public conflict caused them both to leave the team.

Now, the 28-year-old has been traded to the Indianapolis Colts, and his $1.7 million house at 125 Commissioners Pike Road in Woodstown, New Jersey, is for sale. With five bedrooms, four-and-a-half bathrooms and an epic man cave, his house hit the market less than a month after Pederson listed his $2.7 million Jersey home.

The home’s insane man cave is its own separate building with a black-and-white checkered floor. The main room is filled with exercise equipment and what appears to be a covered hot tub. Next to a mounted basketball hoop, the kitchen area has two refrigerators, a freezer and a microwave, according to a promotional video.

The second floor has an air hockey table, and a separate room has space for at least three lawn mowers or golf carts. Plus, there is a whole hunting room — complete with storage for camouflage hunting jackets, a gun display case, a walk-in safe and stuffed, mounted deer heads and other animals.

The 11-acre estate has a three-car garage and six-car motor park at the end of a wishbone-shaped driveway. In the backyard, a raised deck overlooks a pool with a diving board, a jacuzzi, a fire pit and an outdoor kitchen with a grill and a television. Potential buyers can also nab the 24-acre lot for sale next to the house, available for $299,000.

The 7,400-square-foot stone and blue vinyl house is industrial-rustic style, with stone steps leading to the front doors — which are wooden, with 12 window panes. Inside, there is a two-floor entry and a floating stairway, with high ceilings, exposed wooden beams, skylights and numerous half-dome windows, according to the listing.

The kitchen has massive granite-topped islands and a copper farmhouse sink, with wide-paneled wood floors, wood cabinets, a large refrigerator, a double oven and a butler’s pantry. The dining room boasts a wet bar and a 100-bottle wine fridge.

The family room has soaring ceilings with a floor-to-ceiling stone fireplace and wall-to-wall windows extending from the hardwood wide-plank floors to the high, gray wooden beam ceiling. “Just enough grace for today,” reads a sign, and crosses adorn walls throughout the house. Behind the staircase through sliding barn doors is a massage room, and an office has a safe, inset shelves and another fireplace.

Meanwhile, the owner’s suite has cathedral ceilings and French doors leading to a balcony. A sliding-glass barnhouse door leads to a bathroom with a walk-in closet, a huge glass shower with rain showerheads and sprays, a massive bathtub, a dual-sink vanity area and a glass door leading to a smaller toilet area.

The basement has a media room and game room with stone accent wall, a seven-seat bar with a television, a pool table, a home theater with red plush couches with seating for nine and a large gym with mirrored walls.

Now that Wentz has been traded to the Colts after a disappointing and turbulent season with the Eagles, the house is back on the market for almost twice the $950,000 he paid in 2016.

Wentz bought the 1995-constructed house — located about 30 miles from the team’s stadium, Lincoln Financial Field — with his wife, Madison Oberg, in June 2016, only months after he joined the Eagles. The pair have a less-than-one-year-old daughter, Hadley Jayne, and three dogs.

Listing agent Val Nunnenkamp of Keller Williams Realty did not return a request for comment.