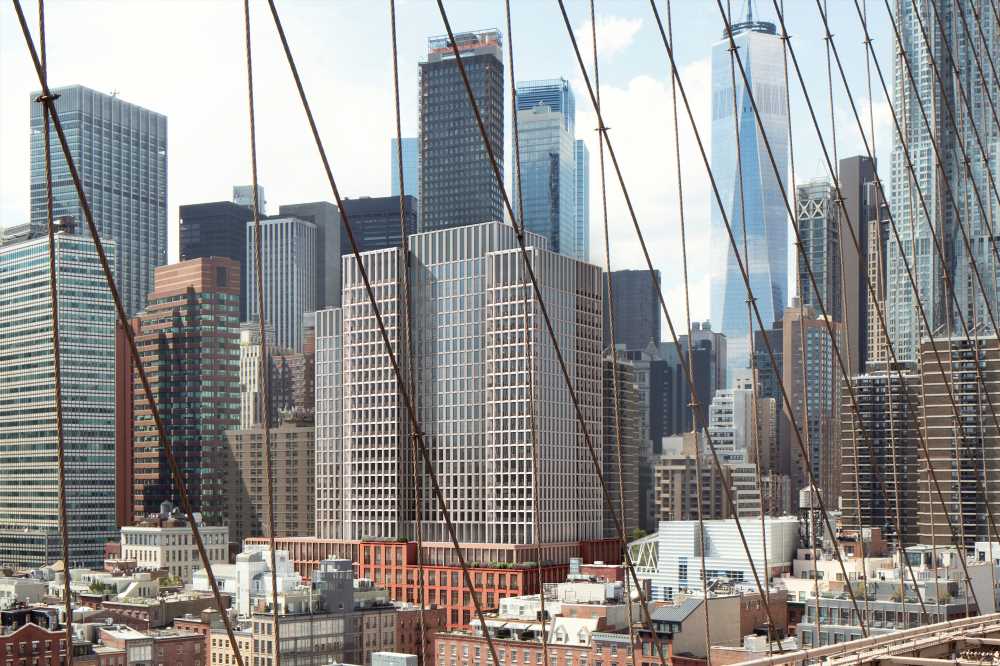 How architect of Brooklyn’s One Willoughby Square became anchor tenant

Despite bleak real-estate market, signs of hope are building

On Monday, HHC will show a scaled-down design to the Landmarks Preservation Commission that’s about 27 percent smaller than the original plan the panel rejected in January.

“We heard their feedback,” HHC New York Tristate Region President Saul Scherl said. “We addressed a lot of their concerns regarding height and mass, and we moved away from the tower design.”

If the new plan by SOM architects — shown here for the first time — gets the green light, it will bring the neighborhood what Scherl called “deeply affordable” rental apartments. It will also provide a long-term commitment by Hughes to keep the fiscally strapped South Street Seaport Museum afloat.

But if LPC gives another thumbs-down, HHC says it will develop the site “as of right” with a much smaller building — with no affordable units and generating insufficient revenue to aid the struggling museum.

HHC bought the land from the Milstein family for $180 million in 2018. The LPC is involved because the 1-acre location, which is bounded by Water, Beekman and Pearl streets and Peck Slip, lies just barely inside the South Street Seaport Historic District.

Why’s an empty lot part of a district that was designed to protect historic old buildings?
As The New York Times revealed in 1989, the former parking lot was squeezed into the district in the 1970s due to political pressure to preserve views of residents of the Southbridge Towers complex across the street.

Today, some Southbridge residents are so fiercely opposed to HHC’s plan that they’ve actually urged the city to use 250 Water for a tow pound that’s to be relocated from the West Side. After all, not even the largest SUV would block views.

If the plan wins LPC approval, it must next undergo the city’s Uniform Land Use Review Procedure because it requires a special permit for its size and to transfer air rights that HHC controls with the city from nearby properties.

HHC has a strong chance to prevail in ULURP because Councilwoman Margaret Chin, who represents the area, supports the plan, as does Manhattan Borough President Gale Brewer.

It’s also backed by prominent executives including CBRE tri-state CEO Mary Ann Tighe, who said, “Every aspect of the design pays homage to the Seaport . . . Most dramatically, it rationalizes the eye’s transit from the towers of Water and Wall streets to the East River’s edge, forming a glide path so that both skyscrapers and Seaport are seen to best advantage.”

The original scheme called for 757,000 square feet in two 470-foot-tall towers atop a podium base. The new design is for a flat-topped building just over 300 feet tall with 550,000 square feet. It will have 70 affordable rental units, down from 100 in the old design, available to families earning roughly $45,000 a year.

Scherl called the $750 million-$800 million plan a “the finishing touch” on the Seaport, where HHC previously invested over $900 million to develop a new Pier 17, turn the Tin Building into a gourmet food hall and revitalize the Fulton Market Building and retail spaces.

LPC approval by April would allow the plan to begin ULURP proceedings in May. Excavation could begin early in 2022, Scherl said.

There’s more at stake for the public than merely replacing a decades-long eyesore. The Seaport Museum — which was launched in the 1960s and provided the first impetus for creating the historic district in 1972 — has long limped along with inadequate funding.
Without help, the future might be dim for the great sailing ship Wavertree, Ambrose light ship and the museum’s many other attractions.

Museum President Jonathan Boulware called the current situation “an existential moment.” He said, “Our walls are full of accolades over 54 years, but where we have struggled is financially. We need several million dollars in annually recurring money” — which could happen under an arrangement with HHC.

Scherl said, “The exact package depends on negotiations with Jonathan and the city.”
He noted that a maritime museum like the Seaport “has much higher costs than other museums. We love the ships, but the ships cost money. It isn’t like hanging a painting on a wall.”

Celebrated Red Rooster chef Marcus Samuelsson is bringing his talents to the Starrett-Lehigh Building. His Marcus Samuelsson Group has signed a lease for a more than 5,000-square-foot restaurant on the ground floor of the massive Art Deco structure between 11th and 12th avenues on the far West Side.

The eatery will be at the corner of 11th Avenue and West 26th Street with outdoor entrances as well as interior access for workers in the building. The asking rent was $150 per square foot.

The culinary concept is yet to be announced. Samuelsson’s operating partner will be his longtime adviser Howard Greenstone and his Red Pebbles Hospitality company.

Samuelsson, the Ethiopian-Swedish author of the acclaimed recent book “The Rise” about the influence of black cooks on American cuisine, said, “This is an important time to be committed to New York and be part of hopefully more black-owned business. For me personally, it’s an exciting opportunity to also explore my ‘Swediopian’ roots in a fresh way and to celebrate the amazing creativity and diversity of our great city.”