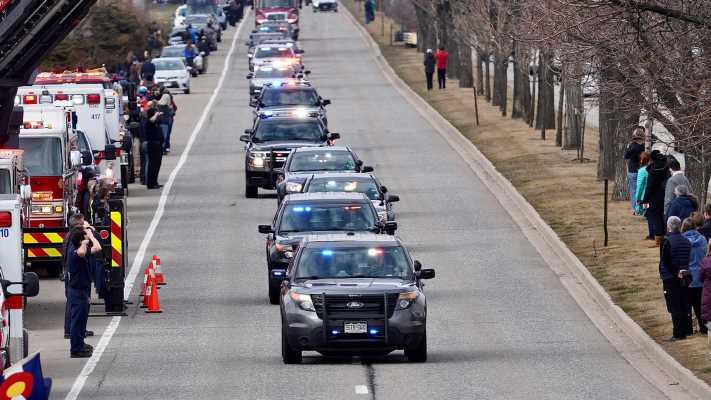 Many are paying tribute to those killed in the King Soopers shooting in Colorado. COVID-19 cases have stopped falling, and that’s got health officials worried. And it’s Equal Pay Day, but we aren’t celebrating.

But first, shows that make us cringe: From “Friends” to “Gilmore Girls,” many favorites from years past have problems that are tough for viewers to ignore. ?

An actor. A sports fan. An officer responding to the scene.

A police officer first on the scene. The glue in a friends’ group of “outcasts.” Workers at King Soopers. A huge CU Boulder sports fan. An actor in local theater. Ten people, whose ages range from 20 to 65, were killed in a horrific massacre Monday when a gunman opened fire in a Colorado supermarket.

Ten people were slain in the shooting at a supermarket in Boulder, Colo. (Photo: USA TODAY)

Flags will be flown at half-staff at public buildings statewide for 10 days to honor the 10 victims, beginning April 1, Gov. Jared Polis said in a statement. “This has been a painful year, and we sit here once again surrounded by seemingly incomprehensible loss,” Polis said.

There’s a big problem at the border of the USA and Mexico, and President Joe Biden says Vice President Kamala Harris is the one for the job. Harris will lead U.S. efforts to stem migration at the southern border, as the Biden administration grapples with the increasingly large number of unaccompanied migrant children accepted into the USA, leading to overcrowding in short-term, jail-like facilities run by Customs and Border Protection. Harris plans to work on establishing a partnership with Mexico and the northern triangle of Honduras, Guatemala and El Salvador.

What everyone’s talking about

Health officials are worried as US COVID-19 cases stop falling

America’s months-long improvement in coronavirus cases has stalled, and rapid increases in some states could count for more than declines in others. The USA  reported a seven-day average of about 55,000 new cases per day – up 3% from the previous week – 4,600 new hospitalizations per day and nearly 1,000 new deaths per day, Rochelle Walensky, head of the Centers for Disease Control and Prevention, said. Health officials are concerned about the impact of spring breakers neglecting public precautions.

On the other end of the spectrum, 2.5 million Americans are vaccinated each day, according to Andy Slavitt, White House senior adviser for COVID-19 response.

Though we love a good rhyming name, Equal Pay Day isn’t actually one for celebration. In 2021, pay disparities and discrimination still exist between men and women, and Rep. Carolyn Maloney, D-N.Y., wants people to know about it. “This day marks the extra time it takes an average woman in the United States to earn the same pay that their male counterparts made the previous calendar year,” Maloney told USA TODAY. Maloney held a hearing on Wednesday – Equal Pay Day – to examine the pay gap, the disproportionate inequalities women of color face, several pieces of “feminist legislation” and testimony from witnesses such as U.S. Women’s National Team soccer star Megan Rapinoe. Though the hearing is a big step ahead, Maloney acknowledged there is “a long way to go to achieve economic equality for women. The data is abundantly clear that this inequality still exists.”

Egypt, we have a problem

A skyscraper-sized container ship became wedged across Egypt’s Suez Canal and blocked all traffic in the vital waterway. The MV Ever Given ran aground Tuesday in the narrow, man-made canal dividing continental Africa from the Sinai Peninsula. The ship’s bow touched the eastern wall, and its stern was lodged against the western wall. Tugboats strained Wednesday to try to nudge the obstruction out of the way as ships lined up in the Mediterranean and Red Seas. As of Wednesday afternoon, it was unclear when the route would reopen. One official said it could take at least two days.

A satellite image from Planet Labs shows the cargo ship MV Ever Given stuck in the Suez Canal near Egypt on March 23. A cargo container ship that's among the largest in the world turned sideways and blocked all traffic. (Photo: Planet Labs via AP)

A break from the news

This is a compilation of stories from across the USA TODAY Network. Want this news roundup in your inbox every night? Sign up for The Short List newsletter here.