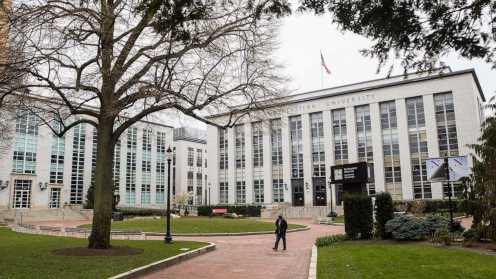 A former track and field coach who worked at several universities has been arrested and charged after an investigation found he allegedly sought to trick female athletes into sending him nude or semi-nude photos, and allegedly cyberstalked at least one other, the Justice Department said Wednesday.

28-year-old Steve Waithe has been charged with one count of cyberstalking and one count of wire fraud and was arrested in Chicago, officials said.

Waithe worked as a coach at Northeastern University in Boston from 2018-2019, authorities said, alleging that during that period he requested to use female athletes’ phones where he would tell them he was filming their practice routines.

He then allegedly embarked on a scheme to trick track and field athletes into sending him nude or semi-nude photos by contacting them through their social media accounts and making them believe he had compromising photos of them that he could help the get removed from the internet.

“Under this pretense, it is alleged that Waithe requested additional nude or semi-nude photos that he could purportedly use for ‘reverse image searches,'” according to a DOJ press release.

Waithe would use pseudonyms when he contacted victims, charging documents allege.

“Under the purported premise of an ‘athlete research’ or ‘body development’ study, it is alleged that Waithe emailed prospective victims using the personas of ‘Katie Janovich’ and/or ‘Kathryn Svoboda,'” the release said. “The emails described a phony study for athletes and requested information relating to height, weight and diet habits. The emails also included a request for the victims to send photos of themselves in a ‘uniform or bathing suit to show as much skin as possible’ and suggested that the photos would not be shared or saved,” the DOJ said.

Additionally, investigators say last year between June and October Waithe cyberstalked one Northeastern student athlete using an anonymized phone number and intrusion of her Snapchat account — at times sending private compromising photos of the athlete to her boyfriend.

The Department of Justice asked any other potential victims to contact investigators.

As of early Wednesday afternoon, it wasn’t clear whether Waithe had a lawyer who could be reached for comment.